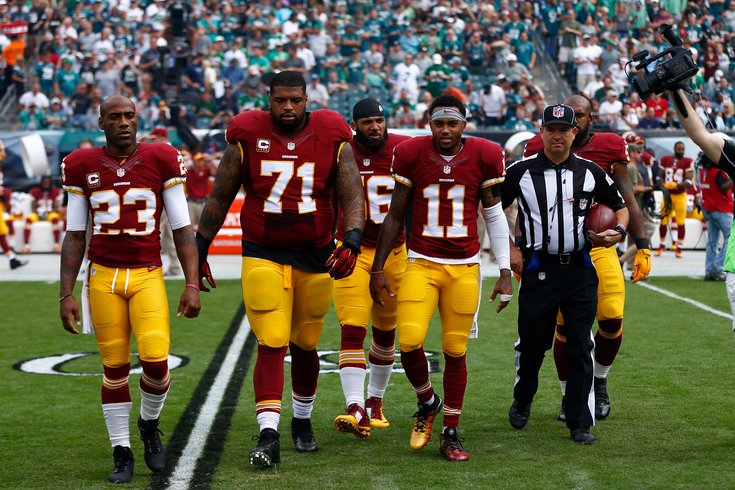 DeSean Jackson and the Redskins will be rolling into Philly on Saturday.

For the gambling degenerates, here are my Week 16 picks. To note, the helmets indicate who I think will win the game, not cover the spread. At the end of the picks, I'll note a few teams that I like based on the spread.

Chargers at Raiders (-6): A week after a thrilling Bucs at Rams Thursday nighter, the NFL closes out its Thursday night schedule with some West Coast badness.

Redskins at Eagles (-3): Kirk Cousins' numbers since the "You like that!" game: 185 of 254 (72.8%), 2205 yards, 16 TD, 3 INT, 115.0 QB rating. That stretch also happens to closely mirror DeSean Jackson's return to the lineup. Remember him? In roughly half the season, Jackson has as many receptions of 25+ yards as anyone on the Eagles' roster. (Both DeSean and Jordan Matthews have eight). Jackson killed the Eagles last season in a "do or die" game for the Birds, as Bradley Fletcher was repeatedly beaten over the top by Jackson.

This time around the Eagles head into their matchup with the Skins playing terrible run defense, while also being banged up in their secondary. And Washington doesn't just have Jackson -- They have also been effectively getting the ball in the hands of TE Jordan Reed, as well as receivers Pierre Garcon and Jamison Crowder. Ultimately, the Redskins may have more weapons to throw to in their offense than the Eagles can cover for 60 minutes, much like the Cardinals did a week ago.

Patriots (-3) at Jets: Per sources close to the Patriots, Darth Hoodie was furious that his scenes were cut out of the new Star Wars movie, so he intends to ramp up his cheating and take his frustrations out on the Jets this week.

Texans at Titans: There's no line on this game, and really, who cares?

Browns at Chiefs (-12): OK, so I'm basically writing the same thing every week here, but Big Red is on fire. The Chiefs' last eight games:

The combined score over that span: 238-98. They are +140 over that span. I'll continue to ride the hot hand ... until Andy inevitably reaches his playoff loss destiny.

Colts at Dolphins (-2.5): Both of these teams are garbage. I'll take the one that still has playoff hopes, I guess.

Bears at Buccaneers (-3): These were actually the first two teams I killed off early this season in my Hierarchy/Obituary series. Then they both climbed back a bit, and then fell back to Earth. Give me the current Lovie team in the Lovie Bowl.

Steelers (-10) at Ravens: During my weekly Eagles chat, a reader asked if I agreed with his top 5 NFL teams, which were (in order) the Cardinals, Panthers, Patriots, Seahawks, and Steelers. I agreed with the inclusion of the Steelers, who are an offensive juggernaut. It's kind of crazy that arguably one of the five best teams in the NFL is far from guaranteed a playoff spot heading into Week 16.

Jaguars at Saints (-3.5): This feels like a good place to post the NFL's draft order if the season ended today:

Rams at Seahawks (-13.5): The Seahawks were always a defensive juggernaut, but now, they're an offensive powerhouse. As we noted in this week's Hierarchy/Obituary, Russell Wilson is balling. His last five games:

Packers at Cardinals (-4.5): The Packers clinched a playoff berth this week, and they'll have the chance to win the division Week 17 against the Vikings, if necessary. They have a potential playoff preview this week in Arizona, which still has some meaning in terms of the 2 seed, so the Cardinals will not yet be resting their starters.

Giants at Vikings (-5.5): Odell Beckham was suspended for his ridiculous behavior last Sunday against the Panthers. He'll have to watch from the sidelines as he lets his teammates down in a season-ending loss.

Bengals at Broncos (-3): I thought this was interesting:

11 teams potentially starting a QB this week who didn't start for them in Week 1. Value of backup QB never has been higher around #NFL.

Picks against the spread: Redskins (+3). That's it. I kinda hate the spreads this week.