Week 6 NFL odds: Point spread and total for every game, including Eagles vs. Bucs 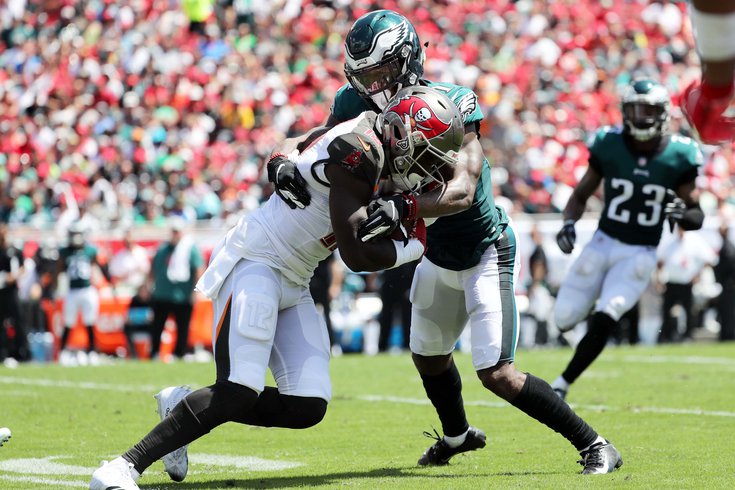 It wasn't all that long ago, but a lot has changed since the Eagles last played the Bucs back in 2018.

After another week of games, the NFL landscape is beginning to come into focus as some teams begin to separate themselves from the pack — for better or worse — while other remain stuck in the middle between contender and pretender.

While Week 6 will bring the first round of byes to the NFL, it should also continue to provide more insight into the haves and the have-nots as "small sample size" begins to become more representative of the whole. The first glimpse we get of that each week is when the early lines come out and Vegas oddsmakers tell us who they think is going to win their upcoming matchups. As we do every week, let's take a look at those early Week 6 odds from around the NFL, starting with Thursday night's Eagles vs. Bucs matchup Philly...

The Eagles will play their second primetime game of the year on Thursday night when they host Tom Brady and the defending champion Bucs at the Linc. Despite a minor hand injury, Brady is expected to be ready to go even with the short week, and that's bad news for an Eagles defense that has struggled against upper-echelon QBs this season.

This past weekend, the London audience was treated to Jets vs. Falcons. This week, they'll be getting Dolphins and Jags. I love having football to watch in the morning while I drink my coffee and start my day, but are we really sure this is the best way to grow the game internationally?

This is one of the better games of the entire weekend as a pair of 4-1 AFC teams do battle in Baltimore. Both teams have shown the ability to win both shootouts and defensive battles, so it'll be interesting to see how this one pans out with two teams featuring dynamic young quarterbacks.

The Vikings squeaked by the Lions in Week 5 and will now head to Carolina to face a Panthers team that has now lost two straight after a 3-0 start to the season. While Minnesota has more losses, their three defeats came at the hands of some pretty good teams in the Bengals, Cardinals and Browns. The Panthers' three wins, meanwhile, came over some pretty unremarkable teams in the Jets, Saints and Texans. Both teams, however, could be welcoming back star running backs off injuries in Dalvin Cook and Christian McCaffrey. Their availability will likely impact the spread in this one.

The Packers needed overtime to survive the Bengals on Sunday after Mason Crosby missed four kicks, including an extra point. They'll look to win their fifth straight this week against a Bears team upset the Raiders on Sunday behind rookie quarterback Justin Fields. The Bears are 3-2 — and their only losses have come on the road against the Browns and Rams, two other teams with winning records.

The Lions are still looking for their first win of the season after an 0-5 start. The Bengals, meanwhile, have been one of the surprises of the NFL, with their only losses coming in Chicago and on Sunday in OT against a very good Packers team. Joe Burrow had to go to the hospital before briefly exiting the game but ultimately fought through and finished.

Carson Wentz and the Colts are the second biggest favorite of the week — and they haven't even played their Week 5 game yet. That will come on Monday night against the Ravens. Still, it's no surprise that they're big home favorites against the 1-4 Texans in Week 6, despite the fact that Indy didn't pickup its first win until last week against the Dolphins.

The only team that's a bigger favorite than the Colts is the Rams — and they'll be playing that role on the road when they visit the reeling Giants, who could be without, well, pretty much everyone on offense after losing Daniel Jones, Saquon Barkley and Kenny Golladay in Sunday's loss to the Cowboys. The Rams, meanwhile, have lost just one game this season to the undefeated Cardinals.

Despite what we saw in Week 4's win over the Eagles, this is not the same Chiefs team we've gotten used to. Can they still explode offensively at a moment's notice? Of course, but they've struggled to be that consistently this year, and it's lead to a 2-3 start for Andy Reid's team. That's the same record of the team they'll face on Sunday in Washington, which has been treading water ever since starting QB Ryan Fitzpatrick went down with a hip injury and could be considering handing over the starter's job to Taylor Heinicke even when Fitz is eligible to return. It's worth monitoring the status of Tyreek Hill and Clyde Edwards-Helaire in this one...

The oddsmakers clearly know something here that I don't, making the 3-2 Browns nearly a field goal favorite against the undefeated Cardinals. Sure, Clevelands' only two losses have been on the road in KC and on Sunday in Los Angeles, but Arizona has been a revelation through the first five weeks of the season, and it's hard to come up with a good reason why they're underdogs. But Vegas clearly knows something.

Both of these teams started 3-0 and have come crashing down to earth the last two weeks, with both teams combining to go 0-4 since Week 3. They're also both teams that the Eagles will face later on in the season — and in the case of the Raiders, one they'll face in less than two weeks. Will they right the ship before traveling to Philly?

Dallas will head into New England on Sunday afternoon as the favorites, and for good reason after the Patriots nearly lost to the Texans in Week 5. The Cowboys, meanwhile, haven't lost since their season opener against the Bucs and have looked like a legit contender un the weeks since. But you should never sleep on Bill Belichick and the Pats, even if they're only a shadow of what they once were.

A pair of 2-3 teams with future Hall of Fame QBs will meet on Sunday Night Football, but the game will lose a lot of his luster with Russell Wilson missing the first start of his career after suffering a finger injury in Thursday's loss to the Rams. The advantage that Seattle had coming off a long week is gone as Geno Smith, who played well but is certainly a step down from Wilson, is expected to get the start.

Josh Allen and the Bills looked every bit like a Super Bowl contender in beating up on the Chiefs on Sunday Night. This week, they'll face a Titans team that would be an impressive 4-1 if not for that awful Week 4 OT loss to the Jets. Still, they're a 3-2 team that can't be slept on with Derrick Henry running the football and will look to hand Buffalo its first loss since Week 1.