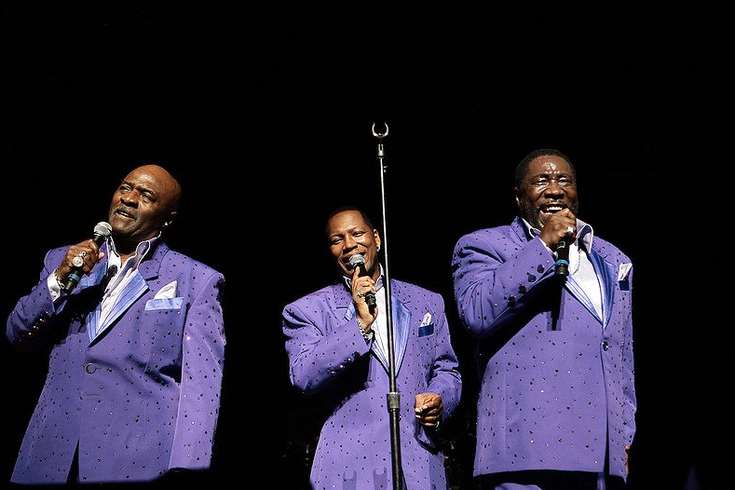 BJ The Chicago Kid @ The Foundry

BJ The Chicago Kid is a bit of a throwback. The Chicago singer is signed to Motown, the legendary soul imprint that has quietly maintained a roster of contemporary artists over the decades, and patterns his vocal style after some of its earliest stars. He has a slinky voice that slips into and out of a delicate falsetto, a toolbox that is as effective in his soulful gospel style as it is when he plays the part of the hook-bearer on hip-hop tracks, like he has for Dr. Dre, Chance The Rapper, and more. For the past couple years, BJ has been petitioning fervently and effectively for his own star status.

The British roots reggae outfit Steel Pulse has been around for more than 40 years. Way back in 1987, the group’s sixth album, “Babylon the Bandit,” became the first Grammy-winning reggae project recorded by a non-Jamaican artist, a unique honor it has retained in the time since. A couple years after that, Steel Pulse contributed a song to Spike Lee’s still revered “Do the Right Thing” soundtrack. Even if you haven’t been tracking their every move, Steel Pulse has been in your ears for years.

This Is Hardcore Fest @ Electric Factory

Philly’s renowned annual hardcore fest returns this weekend with a familiarly packed lineup that’s spread across four dates. As ever, a veritable who’s who of hardcore acts share space under a single roof—or in this year’s case, a pair of roofs, since one of the nights meanders away from the usual Electric Factory digs over to Union Transfer. The Friday night bill corrals bands like Pulling Teeth, Ramallah, Jukai, and more into one of the best hardcore concert values around.

Ramona Gonzalez, a Los Angeles singer with an affinity for the soulful 1980s pop of Janet Jackson, records under the stage name Nite Jewel. Gonzalez is a heady pop writer, but she also has a knack for visceral production, an intersection that can allow her music to sound both urgent and patient. Gonzalez’ latest Nite Jewel album, “Real High,” is her best yet and sounds like an artistic statement of intent.

It feels like just yesterday that Tom Petty was in town, celebrating his recent Grammy honors award and quietly promoting his new music festival. It’s actually been a little less than a month, still a blink of the eye in the context of the glacial schedule that most senior citizen superstars like him undertake. But Petty is tireless, and his star power is only growing in his seventh decade. Still, the almost back-to-back Philly stops don’t mean Petty will be around forever, and his current stadium tour seems like the perfect chance to catch him in this sweet spot.

The O’Jays have a looming presence in soul and R&B music. They’re the type of band that seems like they’ve always been around, a status that neglects their come-up while celebrating their persistence. In the ‘60s, they were just big enough to start cracking the charts, but by the early 1970s, The O’Jays were bonafide hitmakers. (In more recent decades, younger ears have become familiarized with their sweet soul via rampant hip-hop samples.) Somehow, The O’Jays are still around with a much-evolved band roster that nonetheless includes a pair from the original lineup.

The San Francisco prog rockers Primus cast a wide net. They're not quite a jam band, but both their live shows and studio recordings meander into and out of disparate genres with that same carefree approach. Thrash rock and funk coexist when Primus takes the stage, and their renowned front man, the weirdo savant bassist Les Claypool, could make even the most renowned jazz players jealous of his bewildering slap-bass chops. They also have a twisted, self-deprecating humor rare among such intellectual musicians. In the early '90s, the band themselves would coax "Primus sucks!" chants from their own adoring fans, a tongue-in-cheek motto that plays on their outward goofiness. These are musicians that could hang with professional orchestras and jazz conservatories, but instead, they stick their tongues out and flail around on stage. Not surprisingly, their cadre of cult fans love them for it.

For all the recent critical attention Philly’s indie rock acts have had showered upon them in recent years, Bardo Pond is somehow still slept on. Maybe it’s that Bardo Pond, a pysch-rock jam band at heart, have been around for so long—since 1991—and released so many albums—well over a dozen if you count EPs and compilations. But the band also has a fanbase willing to follow them around to tape their live shows, and so their studio output feels almost secondary. On Sunday, they’ve found a perfect setting for their easy going track record: a free outdoor show along the river.