Ten of the weirdest, wackiest stats about college football in Philadelphia 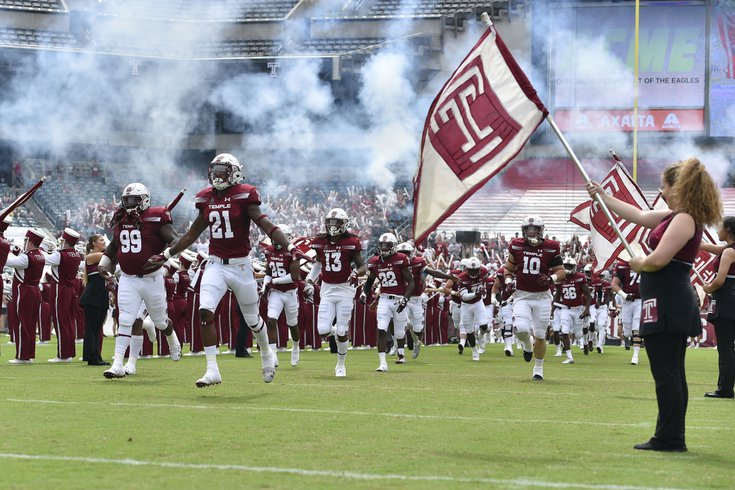 The Temple Owls run onto the field prior to a game against the Villanova Wildcats at Lincoln Financial Field.

For whatever reason, college football has never really been popular in Philadelphia — at least not since Penn was winning national championships over 100 years ago. Cities with pro sports teams often struggle to support big time college football, which is why so many dominant programs come from college towns or rural areas.

Still, Penn, Villanova and Temple have been churning out pro football players and giving those in the city who follow along much to cheer for and look back at. As optimism over college football this coming fall (due to the current pandemic) is lessening as complications arise, we thought it would be nice to pause and appreciate what Philly college football has given us.

And so, here's a look at 10 of our favorite stats, records, or memories from the three major programs:

This article needs to begin with T. Truxton Hare, who played guard at Penn from 1897-1900, playing whatever sport football resembled at that time. Hare is a very rare football specimen, having been chosen to four straight All-American teams. He was retroactively awarded the 1900 Heisman Trophy.

But the ridiculous accolades don't stop there. In 1900 he won an Olympic silver medal at the hammer throw — and won a bronze four years later in the "all around" (similar to today's decathlon). He also won gold in tug of war... yes, that was an Olympic sport. After his athletic career ended, he got his law degree from Penn, wrote nearly a dozen books and ascended to President of Bryn Mawr Hospital. Really makes you think about what you've achieved with your own life.

In more modern times, the Quakers have shown success in the Ivy League, winning more titles than any of their competitors (18, since 1958 — five of them shared).

Sure, Alabama has more national titles, Michigan is a cultural icon and USC has played in more Rose Bowls, but no football team, at any level of college competition, has played in more games than Pennsylvania, which has gone to battle 1,364 total times.

Since their jump to FCS play, three Wildcats have been awarded the Walter Payton award for best offensive player:

BONUS: Westbrook holds the all-time record for all-purpose yards in all of college football with 9,512.

Villanova's two most recent draft picks have each been second rounders: Tanoh Kpassagnon to the Chiefs in 2017 and Ben Ijalana to the Colts in 2011. Before that, Westbrook's selection in the third round of 2002 was the most recent. In all, Nova has had 36 players drafted to the NFL since 1936. Just five of them have ever made a Pro Bowl (Westbrook, again, is the most recent).

Since 1928, Temple and Villanova have faced off 34 times in the "Mayor's Cup," spanning a bevy of different conference memberships and Nova's jump to FCS. In those meetings the two teams are as close as they can be, with the series locked tight at 16-16-2.

If we had to pick, here are the top NFL alums ever from Philly's three major college football programs:

Through Temple's first 75 football seasons, the program had 10 total head coaches. In the 14 years since that, they've had six (including an interim coach). And this doesn't even include Manny Diaz, who agreed to coach the Owls before backing out to coach Miami days later.

Why all the turnover? Well, Temple has for whatever reason become a stepping-stone program for aspiring coaches. It's like buying your first starter home. All six have moved on to bigger and (better?) things since becoming a first-time* college head coach on Broad Street.

*Current head coach Rod Carey is the only one on the list with previous head coaching experience (Northern Illinois, 2012-18).

9. A season for the ages

In 2015, the Owls had their best season in decades. After being ranked in the top 25 last in 1979, the Owls spent seven weeks there, reaching as high as 20th. They went 10-4, winning their conference at 7-1. That fall, they were a possession away from beating Notre Dame, and began the season beating cross-state rival Penn State.

BONUS: Okay, rivalry may be overstating it. The Owls have faced no team more than the Nittany Lions, and are 4-40-1 against them all-time.

The Owls have had 80 players drafted into the NFL since 1935, and have had 67 more make the NFL as an undrafted free agent. In recent years, despite mixed team success Temple has been pro football player factory. Since the end of the Al Golden era, the Owls have had 38 former players make it to the NFL. That means that 26% of the program's pro talent has been churned out in the last 15 seasons.

BONUS: Temple has had just three first-round picks ever. The first was guard John Reinstra, who played seven NFL seasons for the Steelers and Browns after being selected ninth overall back in 1986. Muhammad Wilkerson went to the Jets in 2011 and Haasan Reddick to the Cardinals in 2017.