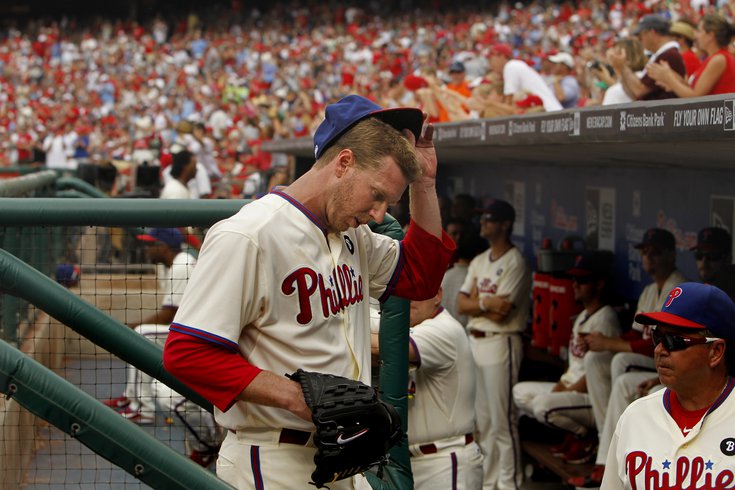 Philadelphia Phillies pitcher Roy Halladay walks into the dugout after throwing eight innings against the San Diego Padres back in 2011.

Philadelphia got to spend four years with Roy Halladay, two of them with the Hall of Fame pitcher still at his absolute peak. But did we ever really know who he was as a person?

That's the question at the heart of "Imperfect: The Roy Halladay Story," an E60 documentary that will debut on Friday night at 7 p.m. ET on ESPN. Friday also marks the 10-year anniversary of Halladay's perfect game and was the night on which the Phillies planned on retiring his jersey number.

The quest for and cost of perfection is central to the stories of many great athletes, including the story of Michael Jordan recently told in another ESPN property, The Last Dance. Unlike in Jordan's story, however, Halladay's story is told by focusing more on the cost side of that relationship, taking viewers from his childhood work in the basement of his parents' home through the crippling pain and reliance on opioids that plagued the end of Halladay's baseball career.

That basement, in a home Roy Halladay's father says was chosen in part so young Roy had somewhere to pitch during cold Colorado winters, was the start of one of the great pitching careers in major league history. Though he was only in Philadelphia for a small part of a decade of dominance, Halladay's first season with the Phillies was filled with milestones. There was the perfect game in Florida in May, a no-hitter in his first postseason start, and a win with the season on the line in Game 5 against San Francisco.

Those stories are all addressed and celebrated during the hour-long special. But "Imperfect" doesn't obsess over Halladay's achievements as something you can separate from Roy Halladay the man.

On the verge of flaming out of the majors in the early 2000s, Halladay was demoted all the way to Single-A in what is now looked back on as the pivotal moment of his career, where a mechanical change and a mental refocus launched him to stardom. But there was more to the trip than that. Nicknamed "Minibar" by teammates in the organization, young Roy Halladay had a drinking habit that prompted the Blue Jays to set him up with counselors, who worked with Halladay to find a better outlet.

"There's kind of some ongoing debate about his early drinking," ESPN's John Barr, who did the reporting and interviews for the documentary and wrote an in-depth story on Halladay this week, said during a phone interview with PhillyVoice this week. "Was he drinking a lot because he was trying to manage the stress of sucking on the mound, or was he sucking on the mound because he was drinking a lot? I think each of those things fed the other...he did everything balls out. If that meant working out, he was going to work out harder than everybody else. When he drank, he would knock back 10 beers. But similarly, early in his career when the Jays became aware of his drinking and spoke to him about it, he went the other way. He was determined not to drink during the season or not let anyone see him drink."

Halladay's wife had another nickname for her husband, Barr says: "Captain Overkill." The mental component of being a major league starter was something Halladay's upbringing didn't necessarily prepare him for. Barr says there is some disagreement within Halladay's family about whether he was pushed too hard by his father, and his sister, Heather, voiced those concerns in interviews conducted by ESPN.

The former ace would eventually be formally diagnosed with ADD, depression, and anxiety following the conclusion of his career. But during it, he wore the weight of his performance in secrecy.

"He would get nauseous and throw up before every game," Brandy Halladay says early in the documentary. "He would take sleeping pills the nights before he pitched because he couldn't sleep, the anxiety of pitching the next day was so overwhelming to him. He needed the help."

Halladay's career highlights feel bittersweet within this context. Interviews from the moments following his perfect game, where Halladay explains he is relieved as much as he is happy, are heartbreaking to watch with the knowledge of the mental and physical toll of being Roy Halladay. To pitch eight innings, 126 pitches, and ultimately lose after giving up just one run in Game 5 of the 2011 NLDS, Halladay pitched through back pain so severe that a sneeze immobilized him at his home following the game.

Things only grew worse from there. Brandy Halladay claims compression in Halladay's spine shrunk the six-foot-six-inch pitcher by a whopping three inches as he tried to play through pain in 2012, and those closest to him watched the man they cared for turn into a shell of himself. In search of a solution to get back on the field and compete, Halladay is revealed to have purchased opioids to deal with the pain from a doctor in Florida, recommended by a former Phillies teammate unnamed in the documentary.

Kyle Kendrick, whose locker was next to Halladay's, watched his friend and colleague wither under pain and a substance abuse problem. Along with another teammate, he took the issue further up the Phillies organization, and E60 claims the anonymous party would eventually confront Halladay about his opioid usage in an attempt to scare him straight.

"The reality is in the same clubhouse where teammates who loved and revered Roy Halladay grew concerned and approached the team, approached him about his issues, in that same clubhouse there was a teammate who provided an option to him that led him down the wrong road," Barr said. "At the end of the day, Roy made his own choices. But I think knowing both of those things I think it says a lot about what goes on inside that bubble that is professional sports...Roy didn't get painkillers for the first time from a team doctor, but he found a doctor who was willing to sell him painkillers for cash."

If not for the involvement of his family, this all might feel heavy-handed, piling on an addict who died tragically by taking the joy out of his accomplishments. But stories pour in from his sister, his father, and even his first-born son, a 19-year-old currently pitching for Penn State, about the psychic toll of Halladay's career.

"It's almost like seeing two different people," Braden Halladay says of his late father. "He wanted everyone to see that he was alright and he was fine, even though maybe at times that wasn't necessarily the case."

That projection of strength, though, wasn't Roy Halladay. As you learn in "Imperfect," he was a man who couldn't stand to let people down. Attempts to address his issues, like a trip to rehab made months before his retirement from baseball, were cut short by Halladay's fear of it leaking to the public. His wife, Barr told PhillyVoice, believes Halladay was involved with his children and a wonderful father but tried to take a more hands-off approach to parenting because of the role his own father played in his life.

"When he was sent to counseling after the Jays sent him down to Lower A ball," Barr says now, "it wasn't just for the drinking, it was in part because he'd never failed and he didn't know how to deal with failure."

This isn't a story that tears down a man who can't defend himself, nor does it ignore his struggles. "Imperfect" is about a flawed man who sacrificed his own health and well-being to look perfect every five days for 10 straight years. It's a story worth hearing.