The men allegedly shot a man inside a West Chester club 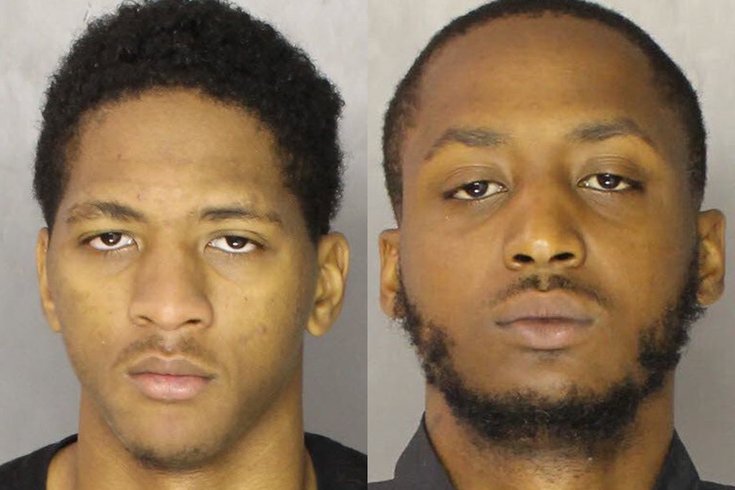 Tyrell Jacobs, 23, left, and Tim "TJ" Jacobs, 24, are charged with first-degree murder, conspiracy and related charges in the death of Eric Brown in West Chester.

Two brothers wanted for allegedly killing a man inside the Star Social Club in West Chester were captured Tuesday night in Philadelphia.

The U.S. Marshals Fugitive Task Force arrested Tyrell Jacobs and Timothy "T.J." Jacobs at 40 N. Robinson St. in West Philadelphia at 6 p.m. Timothy Jacobs was in possession of a firearm when he was captured.

The two men eluded the Marshals for several days, despite near-captures on multiple occasions, according to the Chester County District Attorney's Office.

The two men are expected to be arraigned in Chester County on Wednesday.

They are charged with first-degree murder, third-degree murder, criminal homicide, aggravated assault, reckless endangerment and related charges, and are not eligible for bail, authorities said.

"We always appreciate the assistance of our colleagues from the U.S. Marshals Service," District Attorney Tom Hogan said in a statement. "Whether running down Barry Baker, the man who sucker-punched a disabled victim, or capturing these two dangerous fugitives, the Fugitive Task Force is relentless in tracking down bad guys. Now, these two will face justice."

The brothters were wanted for allegedly gunning down Eric Brown after an argument inside the Star Social Club at 212 E. Market St.

Brown had been playing basketball in West Chester before heading to the club shortly after 9 p.m., according to a criminal complaint. The Jacobs brothers allegedly arrived and began arguing with Brown in an attempt to draw him into an altercation.

Their exchanges and interactions were witnessed by multiple people and captured on surveillance cameras, the complaint states.

The two defendants then allegedly threw several punches and attacked Brown, who fled within the club. The Jacobs brothers allegedly chased him, brandishing firearms, according to the complaint.

Brown attempted to escape through a back door, but did not realize it led into a small room with another door that is locked from the outside, the complaint stated.

Tyrell Jacobs first entered the small room where Brown was trapped, according to the complaint. While Timothy Jacobs stood at the door with his gun out, Tyrell Jacobs allegedly fired a shot into Brown's chest. Brown died of his injuries.

The Jacobs brothers both fled out the front door, but departed in separate vehicles, according to the complaint.

"This was a senseless act of murder and we will continue to investigate the incident and pursue justice for the  victim and his family," West Chester Police Chief Scott Bohn said in a statement.