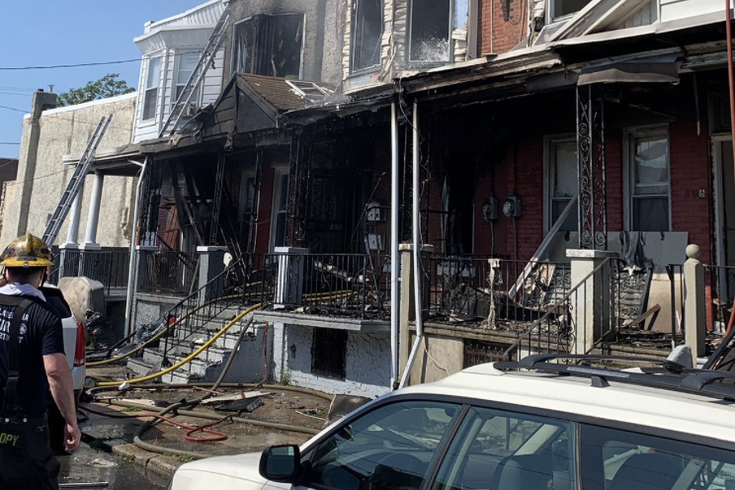 A fire was put out Tuesday morning at a vacant property along the 100 block of North 59th Street in West Philadelphia. On Monday night, police declared a hazmat situation at the same property after finding 154 gallons of gasoline in the living room.

Read More
Update (Sept. 17., 2022): U.S. Marshals have arrested Darren Arnold, 37, of Philadelphia, on arson and related charges for allegedly setting multiple fires on the 100 block of North 59th Street last month. An arrest warrant had been issued Aug. 4 – two days after more than 150 milk jugs filled with gasoline were found inside a building on the street.

Arnold was taken into custody without incident near 10th and Oregon Avenue in South Philly on Wednesday, the U.S. Marshals said.

Philadelphia firefighters put out a blaze Tuesday morning at an abandoned house in West Philadelphia less than 12 hours after 154 plastic containers filled with gasoline were found inside.

The fire started around 9:50 a.m. at a house on the 100 block of North 59th Street. Firefighters contained the blaze by 10:30 a.m., but three neighboring homes were damaged. Several people have been displaced.

PFD responded to this house last night for a hazmat incident and again this morning around 9:50 a.m. for a fire. The fire was placed under control around 10:30 a.m. Our Fire Marshal's Office will investigate the cause. https://t.co/8yd6hBv2Lr

The fire broke out hours after the unusual discovery of the gasoline jugs prompted a hazmat declaration Monday, August 1, a city official confirmed. Neighbors had reported a strong smell of gasoline on the block around 8:30 p.m.

Firefighters and police found gasoline in plastic milk jugs on the living room floor. As a precaution, nearby properties were evacuated while the fire department and the Department of Licenses and Inspections removed the jugs from the home.

It's unclear whether the gasoline jugs were linked to a possible arson attempt or whether someone was selling the gas on the black market. Authorities have not said whether all of the jugs had been removed by the time the fire started. There was another fire at the same property in March, authorities said.

WEST PHILLY HAZMAT: @PhillyPolice say they found 154 plastic one-gallon milk jugs full of gasoline inside a vacant home on 59th street. Hear what they think it may have been used for coming up on @CBSPhilly at 530, 6, and 630am #Philadelphia #Philly pic.twitter.com/YO3WatT3RQ

Police are questioning a 37-year-old man who they say either owns the home or frequently visits the property. That man is considered a person of interest in the gasoline containers, but police have not said whether he may be connected to the fire.

"With that much accelerant — that's 154 gallons of gasoline in a property that already caught fire and it's the summertime," Small told 6ABC. "Everything's hot. Everything's dry. The potential was there for a major catastrophe."

The fire and the discovery of the gasoline jugs remain under investigation.