What they're saying: Senior Bowl roundup 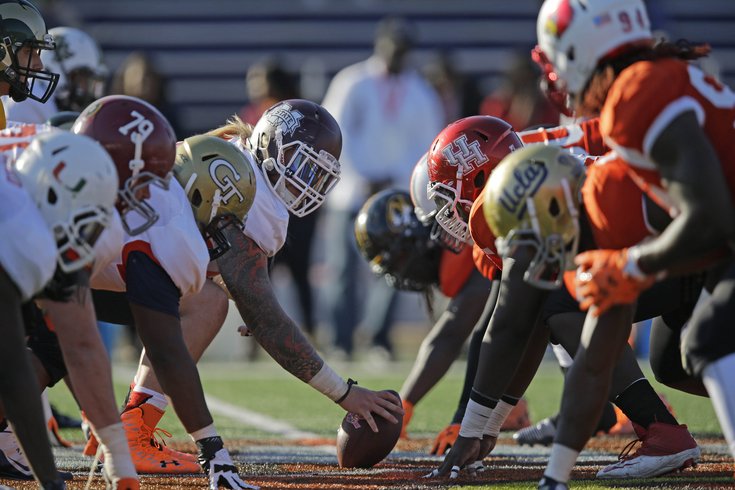 Obligatory "down the line of scrimmage" camera shot.

The Senior Bowl will be played today at 4pm EST on NFL Network. Over the last five years, the Eagles have drafted more players competing at the Senior Bowl than any other team in the NFL. PhillyVoice attended the Senior Bowl practices earlier in the week, but here is what some other people in attendance are saying from down in Mobile, Alabama.

He started 34 consecutive games at safety for the Spartans and was named the Big Ten's Defensive Back of the Year last season. Drummond had 12 interceptions and 14 tackles for loss. He was a co-captain as a senior and earned his degree in psychology.

The Eagles want their safeties to be able to be able to come down and play man coverage against the slot, something Drummond has shown he's capable of on film.

"I covered the slot a lot," he said. "Very aggressive. Corners up in your face. Safeties on an island just as much as the corners most of the time. I feel it really helped prepare me for the next level."

Drummond will have to show he has the range to play center field in single-high looks at the NFL level. But given his cover skills, he's a player to watch.

#JimmyNote: Agree strongly that Drummond seems like a logical fit for the Eagles.

I'm just going to link to Tommy's Scouts Notebook home page, because he has several posts with notes from each practice. A sampling:

* QB Blake Sims has not impressed me. I kept my expectations limited so this isn’t a case of me thinking he would stand out. Receivers had to slow down and wait for deep throws from him. Sims didn’t look good on intermediate throws. He still has one more day to get going, but Sims hasn’t done much to sell himself as the #3 QB in this class.

* Garrett Grayson is the other QB in Mobile. He is inconsistent, but his good moments are impressive. He has a solid arm and will connect on some deep balls. I think his motion is awkward and a bit slow, which affects him on short, quick throws.

* LB/DE Lynden Trail is an interesting player. He’s huge at 6-6, 262. He was once a star recruit for the Florida Gators, but then moved on to Norfolk State, where he was a dominant player. You see him on one drill or rep and he looks really good. Then you see another and he looks stiff and gangly. Trail was a terrific pass rusher for NSU. He played LB and DE. 3-4 teams should be very interested in him, but so far Trail hasn’t been all that impressive when playing in space.

Utah's Nate Orchard rushed with his hand on the ground for his entire career and said he prefers to play end, but he has outside linebacker size (6-3, 251) and played there at times during Senior Bowl practices this week.

"I prefer to play with my hand in the ground," Orchard said Thursday. "I've been doing it for 10 years. If I had to play outside linebacker, the transition would be smooth."

Orchard conceded that he would have to pack on 20 pounds if he were to play end in the NFL. He already has the long arms that many teams, including the Eagles, like their pass rushers to have. Orchard said he met with Kelly and the Eagles this week and described the meeting as "intense."

#JimmyNote: Orchard was awesome as a pass rusher all week, but was brutal in coverage. His best fit at the next level may be as 4-3 DE. He could certainly learn how to play in space, but if you're the Eagles and you draft him 20th overall, you're probably getting a guy who, at best, will have a very limited role as a obvious passing down rusher Year 1.

One prospect, who plays a position that requires a level of intelligence and analysis, was asked how many weeks there are in a year.

"Close enough," the scout said, and moved on to other areas.

Later, that scout said he often asks the weeks-in-the-year question and no longer even raises an eyebrow at varying answers. One guy a few years back guessed "five," the scout said.

"And that guy who said 'five' kicked absolute butt in the league this season," he continued. "So . . . "

#JimmyNote: I actually laughed out loud at that.

Who did the Eagles meet with at the 2015 Senior Bowl? - Eliot Shorr-Parks

#JimmyNote: Mainly defensive players, with a few WRs sprinkled in.

Some people still believe in Eagles outside linebacker Marcus Smith.

One of them is Lorenzo Mauldin, an impressive 6-foot-5, 256-pound outside linebacker from Louisville, the same school that produced the Eagles’ last first-round pick. Mauldin and Smith roomed together before Smith turned pro.

After a recent South team practice, Mauldin said he and his former college roommate talk frequently and that he’s seen the best in Smith, which he still expects to see at the professional level despite his friend’s disappointing first year.

PhillyVoice's coverage at the Senior Bowl: