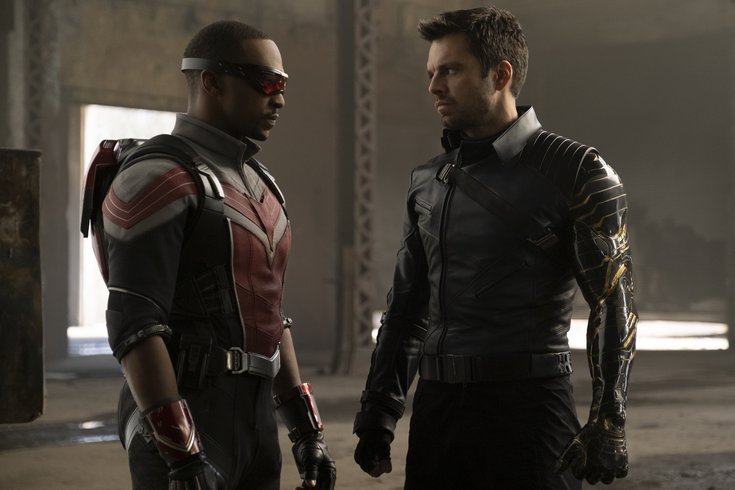 'The Falcon and the Winter Soldier' is out March 19 on Disney+. The show is about Sam Wilson and Bucky Barnes, but many other details about the series have been kept a secret.

It's a new month, which means new shows and movies are coming to the many different streaming services available.

When there are so many options, it can be be overwhelming to pick something to watch.

To help, PhillyVoice staffers are sharing what they plan on streaming in March. Maybe seeing what we're interested in watching this month will help with your decision process next time you're in front of the TV.

RELATED: PFS's drive-in movies at the Navy Yard set to return for 2021 season | Paramount+ makes its debut: Here's how much it costs and what original programming it offers right now | Rob McElhenney teases photo outside Paddy's Pub as fans await return of 'Always Sunny'

I've watched the 2016 documentary "Sour Grapes" several times. The story of how a con artist sold millions of dollars of fraudulent wine is fascinating to me, so when I saw a similar documentary was on Netflix, I knew it would make my must watch list.

Technically, the documentary "Made You Look: A True Story About Fake Art" came out at the end of February, but I'm including it anyway because the more to watch the the merrier.

"Made You Look" is about how one of the most respected art galleries in New York City became the center of the largest art fraud in American history. That's enough to get my attention.

Reviews have been mixed, but more on the positive side, so I'm ready to watch and form my own opinion.

Another documentary I plan on watching is "Operation Varsity Blues: The College Admissions Scandal" (out March 17 on Netflix) about the misconduct that led to Lori Loughlin and Felicity Huffman making headlines.

It's from the team behind "Tiger King" and "Fyre," so you know it's going to be good.

Pat: "The Falcon and the Winter Soldier" (out March 19 on Disney+)

After having spent the last two months watching "WandaVision" on Disney+, my streaming attention will turn to the next Marvel Cinematic Universe series: "The Falcon and the Winter Soldier." It stars Anthony Mackie and Sebastian Stan as the title characters, as well as Emily VanCamp reprising her role as Sharon Carter from the MCU movies.

"The Falcon and the Winter Soldier" should give us a look into what life has been like for both Sam Wilson and Bucky Barnes since "Avengers: Endgame." It also will be interesting to see what presence, if any, Captain America has in this series, given the connection that Steve Rogers had to all three characters. Like "WandaVision," the show should not disappoint.

Hannah: "Murder Among the Mormons" (Netflix)

I’ve been craving a new true crime docuseries, and “Murder Among the Mormons” looks like it will deliver. The show takes a look at the inner workings of the Mormon Church, focusing on some bombings that took place in the '80s that killed two people and injured a third.The bombings apparently are related to the buying and selling of historic documents dating back to the origins of the Church of Jesus Christ of Latter-day Saints.

The plot is taken from a book I’ve read with the same title that was written by Nico Walker, a war veteran turned bank robber with an opioid addiction. The novel was written and published while Walker was still in prison and became a big hit.

Created by the directors of several Marvel movies, and with Spider-Man (Tom Holland) playing the role of Walker, it will be interesting to see how the story translates into a film.

Michael: "Seaspiracy" (out March 24 on Netflix)

Exposés have a way of presenting imagery that often speaks for itself, even if you have to keep in mind that the storytellers are coming at issues from a specific perspective. The makers of "Cowspiracy" are returning with a new documentary, "Seaspiracy," that confronts the global fishing industry and its ecological impact.

Most of us have no real comprehension of the scale of this industry, whose visibility is less apparent than what takes place on land. The goal of conservation often cuts across political lines, so this documentary seems likely to shake up conversations about how our interventions in the sea are setting up the planet with concerns that demand more attention.

Here's a look back at what we wanted to watch in February.