What was Philadelphia's first restaurant?

For one thing, attendance by women was frowned upon 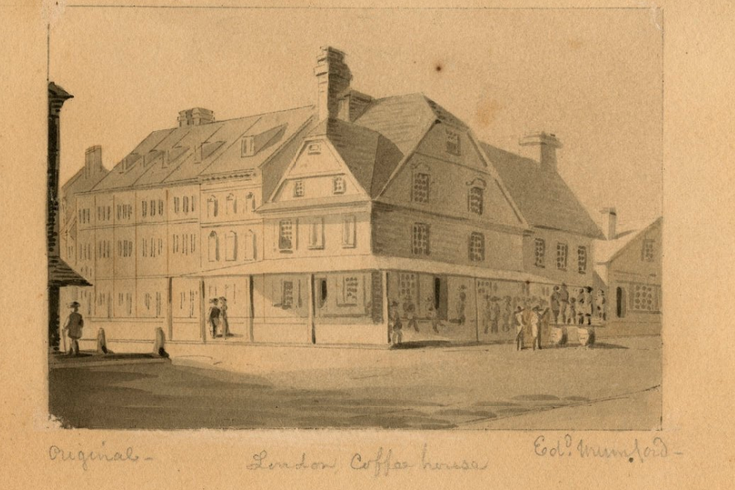 The Library Company of Philadelphia /for PhillyVoice

The London Coffee House, as drawn by Edward William Mumford, circa 1844.

Sure, Philadelphians today love to dine out at nationally recognized staples like Zahav or neighborhood favorites like Hardena, but where did the city's restaurant culture get its start?

Curious, we reached out to William Woys Weaver, director of the Keystone Center for the Study of Regional Foods, who's also writing a book on the city's culinary history.

What was Philly's first restaurant?

The Blue Anchor was Philadelphia’s first eatery. The structure was made in England and shipped over on a boat so that it could be reassembled along the Delaware River in 1681. It was constructed of half-timber and brick--old English style--and was located at what is now 242-244 South Front St. but what was then the mouth of Dock Creek. Its purpose was to provide a wharf and a place to stay for William Penn when he arrived in Pennsylvania on the Welcome in 1682.

The tavern was built for its owners, George and Alice Guest, who were Quakers, and it specialized in various types of rum. It was the center of business life into the 1740s, then its importance began to decline as the city grew and other larger establishments were opened.

There do not seem to be any old photos of the building, but drawings abound, although there is no way to know how accurate they are. As the city grew, the Blue Anchor became the place where immigrants were processed, so this was probably the first place on land that they got a meal. The location at Society Hill was chosen due to a sandy beach that was fairly protected. The tavern was demolished in 1810. However, some jugs from the tavern were discovered on the site and are now in the Atwater-Kent Museum.

• The Blue Anchor, in Society Hill, was the city's first eatery.

• It was, in addition to being an eatery, also a rum bar.

• The eatery didn't last long: It was demolished by the early 19th century.

• Perhaps ahead of the brunch trend, beefsteak and hot chocolate was part of a popular morning meal.

• Though these eateries existed, people generally didn't eat out during the time period unless they had to.

What were some menu items? What did a Philadelphian's diet look like at that moment in time?

No menus for taverns or restaurants survive from 18th century Philadelphia, but we do have a general idea of what sort of food was served. Most taverns bought meat by the quarter animal, so there were always roasts. Beefsteak and hot chocolate was a popular breakfast dish. Basically, you ate what was then available from the hearth, which of course changed from day to day.  You put together your own meal based on what you wanted to spend since each item was separate. Cheap Spanish wines were common, beer was available during the winter, and gentlemen drank punch, often served hot during cold weather. Rum and gin slings were also typical. Punch could be ordered by the glass, cup, or large bowl. Generally, when you ordered a bowl, you were sharing it with friends. Punch in this case was something similar to Fish House Punch, a rum, and lemon, orange, or lime juice mixture.

I've also heard of the London Coffee House. What was that establishment like and what role did it play in the community?

The London Coffee House was built of brick in 1702 but did not open as a Coffee House until 1754. So it is really not among the earliest. However, it was the only true coffeehouse, European style, in the city during its heyday. It was the center of business life and cargo from ships--like lemons and oranges--were also sold at the tavern. Its business died in the 1780s because it was more or less replaced in stature by City Tavern.

After that, the building was used as a private residence and then converted into shops. There is a photo of it from 1858. The tavern was located on a corner of Market and Front streets and was demolished sometime after 1858.

What was restaurant culture like in that time period?

As a general rule, people did not eat out in the 18th century. Business was largely devoted to travelers who had no choice.  Places like the Blue Anchor or London Coffee House – even City Tavern – catered to businessmen who could not go home for dinner. Women simply did not enter these places. It was considered uncouth, and even into the early 1900s, restaurants and hotels maintained separate dining rooms for women.

How authentic is City Tavern? Should people feel like they're getting the real-deal experience there?

What we do know about City Tavern is that there were two kitchens with two chefs, one English-style, the other French.