In 2013, the Eagles' offensive line stayed remarkably healthy. Its five starters - Jason Peters, Evan Mathis, Jason Kelce, Todd Herremans, and Lane Johnson - played a combined 98.18% of the offensive snaps. That quintet started all 17 games (including the playoffs), and only Peters played fewer than 99% of the snaps:

The fact that the Eagles' OL stayed so improbably healthy for an entire season led some analysts to wonder if that was sustainable. If the Eagles didn't have the same kind of luck in 2014, might they struggle to cope with injuries? Those analysts' concerns were valid. In 2014, the Eagles' OL was in a constant state of disarray due to injuries and Lane Johnson's suspension. The 2014 edition of the Eagles starters along the OL played just 68.62% of the team's offensive snaps combined:

In fact, the starting combo of Peters-Mathis-Kelce-Herremans-Johnson didn't play a single snap together in 2014. A chart of who started each game: 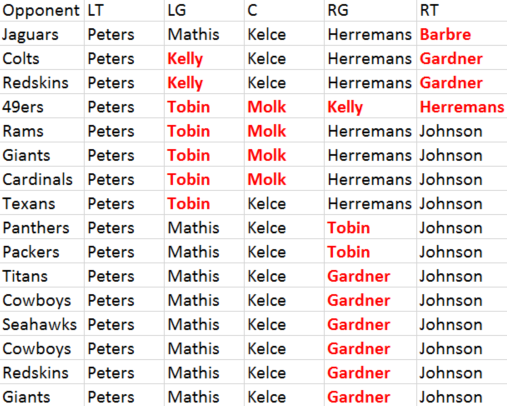 That's a lot of red. Take particular note of the 49ers game, in which four starters were playing something other than their normal position. The Niners' front seven completely dominated the Eagles' OL, and the Eagles rushed for a putrid 22 yards on their way to a 26-21 loss in which the offense didn't score a single point.

Although we already noted that Peters-Mathis-Kelce-Herremans-Johnson started every game together in 2013, let's look at it in chart form, because, well... Charts! 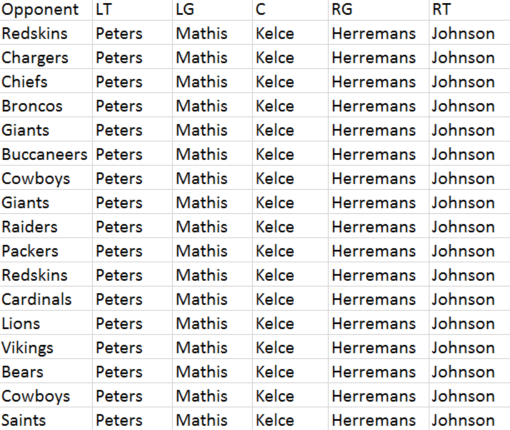 As a result (and among other reasons), the Eagles' offense was nowhere near as potent in 2014 as it was in 2013, especially in the run game: 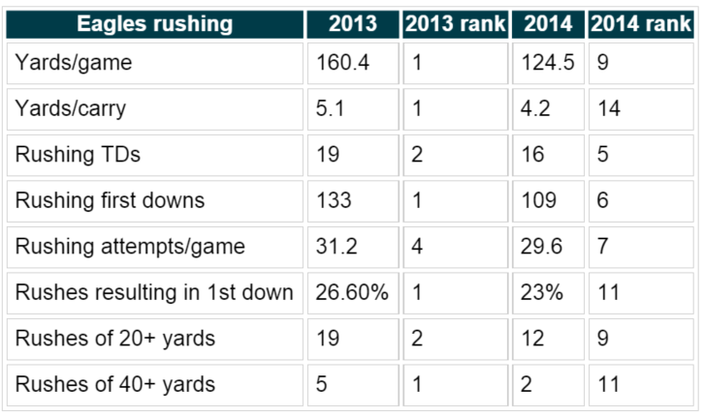 In other words, they went from being the best rushing team in the NFL to one that was merely "good," which in turn had the trickle down effect of affecting the passing game.