Who is Anthony Stolarz? Getting to know the Flyers' newest goalie

With Mason and Zepp both out, Flyers call on top goalie prospect to back up Emery 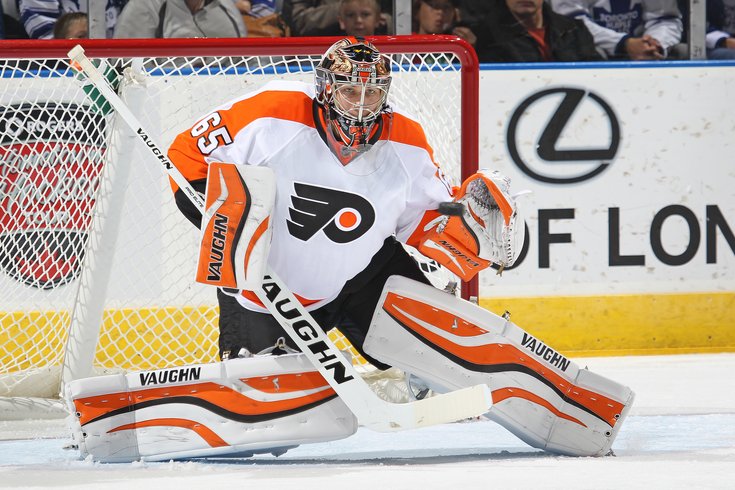 On Sunday, goalie Steve Mason suffered yet another lower-body injury, forcing him to leave the Flyers' 3-1 win in Washington midway through the game. Unfortunately for the Flyers, Mason had been one of the hottest goalies in the NHL since the all-star break, which was one of the main reasons the team has been able to hold on to hopes of making the playoffs.

Those hopes took a major blow after the game, when general manager Ron Hextall addressed reporters in the locker room, telling them that Mason wouldn't be traveling with the team to Montreal -- they play the Canadiens on Tuesday night -- and a move would be forthcoming.

"He won't be coming to Montreal tomorrow, so I guess it's that serious," Hextall said when asked about the severity of Mason's injury, adding that he would be "surprised" if the 26-year-old goaltender returned at all during the road trip.

With Mason sidelined -- we'll know more about his status after he is re-evaluated on Tuesday, according to the Flyers -- the team will presumably look to veteran Ray Emery to carry the load. But who will be his backup?

Robb Zepp, the 33-year-old rookie goaltender that made his NHL debut earlier this season, is unavailable according to Hextall, as recently suffered an injury as well. He had played relatively well for the Orange and Black in limited action this season, going 3-1 in six games with a .889 save percentage and a 2.92 goals against average.

That leaves just one other goalie, 21-year-old Anthony Stolarz, currently under contract for the Flyers.

The second-round pick in 2012 NHL Entry Draft, whether he's ready or not, will join the Flyers prior to Tuesday night's game in Montreal, the team announced Monday. However, it's clear that this move is being made out of necessity, and not because the front office believes that Stolarz is ready for the NHL.

"Is he ready for this level? Probably not," Hextall candidly told reporters after the game.

But right now, the Flyers don't have any other choice.

Here's some more on Stolarz:

Stolarz made 36 saves Sunday for the Phantoms, who beat the Hershey Bears, 5-4, in overtime. After the game, he was asked about likely being called-up to join the Flyers:

"I'm kind of speechless right now," he told the Allentown Morning Call. "As a kid, you always dream of it. To get the call, it's very exciting. I'm very happy."

Here's a look at what some scouting sites have to say about Stolarz. The first is from Hockey's Future:

Stolarz is a butterfly goaltender with good size who makes good use of his size in limiting the choices of shooters.  He isn't afraid to challenge shooters, and generally plays a good positional game that doesn't leave many options for an opposing shooter.  Stolarz could stand to work on his post-to-post coverage, but that is something that he'll have time to work on.  -- hockeysfuture.com

The also give him a talent rating of 7/10. According to their grading system, that represents a "journeyman No. 1 goaltender" like Chris Mason, Dwayne Roloson or Mike Smith. According to their site, a seven out of ten ranking goes to "players not quite good enough to play on the top line or pairing on a regular basis, but still possessing enough talent to contribute offensively, defend with some authority, or competently play the goaltender's position for long stretches."

Stolarz apparently has a high hockey IQ as well. This is from his draft profile on TheHokeyWriters.com:

Another part of the big netminder’s upside is the development of his mental toughness as the goalie has illustrated a high level of mental acuity when describing his play and duties as a goaltender. Even though Stolarz could use some work on his technique, the goalie has admitted that he wants to face as many shots as possible as he continues to play hockey. The American netminder fashions himself as a Butterfly-style goal, but the goalie’s size will undoubtedly be one of his biggest assets come draft day. -- Anatoliy Metter, thehockeywriters.com

Kyle Woodlief of USA Today compared Stolarz to Pekka Rinne prior to him being drafted by the Flyers:

At 6-5, 200, Stolarz is a huge and confident butterfly goaltender in the Pekka Rinne mold with lively and long octopus-like limbs and remarkably fast feet for a goaltender his size. Despite wearing leg pads that are barely knee-high, he has a lot of layers to him as he battles hard, does well in traffic, and is a skillful and intelligent puck handler.  -- Kyle Woodlief, The Red Line Report

This is what Jashvina Shah of Hockey's Future wrote about Stolarz in August when ranking the Flyers top 20 prospects. Stolarz finished 10th.

Stolarz is by far Philadelphia’s best goalkeeping prospect, and he might the best goalkeeper the organization has had in a while. But for a team like the Flyers, that does not mean much for Stolarz. He has the potential to be a good netminder, especially because of his size, but he is not as talented as some other goaltending prospects. He moves well, can take up space and can take space away – but he still has to work on some technical aspects of his game. Development has not gone as planned for Stolarz, who missed a significant portion of last season after being cut by a skate. -- Jashvina Shah, hockeysfuture.com

Justin Goldman of The Goalie Guild was intrigued by Stolarz's rapid rise as a prospect from a relative unknown to a top talent. The story also includes a lengthy one-on-one with the goalie. You should definitely check it out. Here's Goldman on Stolarz:

When Central Scouting published their final season rankings in early-April, I was most surprised by the unexpected rise of 18-year-old goaltender Anthony Stolarz.

A prospect that very few people are familiar with, the 6-foot-5 native of Edison, NJ was listed 20th overall in Central Scouting’s mid-term rankings. By season’s end, however, he had re-surfaced as the fourth-ranked North American goaltender. That put him ahead of more notable and recognizable goaltenders like Chris Driedger, Francois Tremblay, Jon Gillies, and even Andrey Makarov. -- Justin Goldman, TheGoalieGuild.com

Mike Sielski, now with the Philadelphia Inquirer, spoke to scouts after Stolarz was drafted, while writing for the Wall Street Journal. Here's a sample:

Eric Krupka of Amateur Hockey Report, an independent scouting service, questioned whether the caliber of competition that Stolarz faced in the NAHL has prepared him enough for advanced levels of play. "His peers are playing against the best of [Canadian junior leagues] and Europe and dominating," Krupka said. "We aren't convinced Stolarz would be doing the same in those situations. Philadelphia must be expecting a very long maturing process before bringing him into the fold." -- Mike Sielski, Wall Street Journal

A look at the prospect in net during his time with the London Knights:

Injuries, both given and received

First, there was Stolarz slashing an opponent in the back of the head:

For that, Stolarz received a 2-minute minor penalty for high-sticking. Later, however, the OHL handed him an eight-game suspension.

Then there was this scary incident, which resulted in Stolarz missing an extended period of time after the cut caused by his opponent's skate required 55 stitches.

[Warning: This video may be considered graphic by some.]

Now let's see how much time gets in net...

The Flyers announced Monday that their upcoming home game on Sunday, February 22 against the Capitals has been moved to 12:30 p.m.

According to a press release from the team, the NHL made the change "to accommodate a national telecast on NBC, which will be the first of three nationally-televised games by the network that day as part of Hockey Day in America."

The doors of the Wells Fargo Center will open at 11 a.m. that day and all previously issued tickets for the game will still be honored. The team also said that because of the time change, the radio broadcast will be available on 97.5 The Fanatic.