So, who was that burly white supremacist at Trump's Harrisburg rally? 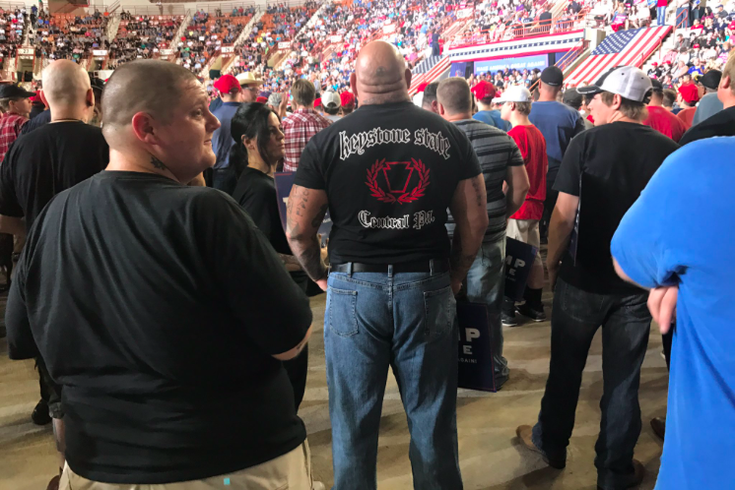 This picture of a man in a white-supremacist organization's T-shirt was taken at Donald Trump's rally in Harrisburg on Saturday, April 29, 2017.

Watching this weekend’s Donald Trump rally in central Pennsylvania from afar, one image rose above the fray to capture my attention.

It was a Tweet from New York Magazine’s Olivia Nuzzi that read, “Seen at the Trump in Harrisburg:” and it was accompanied by a photograph.

That photograph was of a burly white man with a shaved head. He was wearing a black T-shirt that read “Keystone State: Central Pa.”

Reading between the lines – as many like-distanced observers did – it was interpreted as meaning that there was a white supremacist in the crowd on Saturday.

This did not come as a surprise to me. There have been a litany of stories attempting to link the new president to an empowered white-supremacy movement. (See here, here and here for starters.)

Judging by the reaction, most people were focused on the whole “OMG, would you look at that guy in a shirt tied to a white-supremacist organization?”

Well, my mind focused on a couple other things: Who is he and what did he think about what Trump had to say?

I thought determining that would be difficult, what with his back facing the camera and all.

Then, I remembered that I’d written a story in late March about a fellow by the name of Daryle Lamont Jenkins, who I termed "Public Enemy No. 1 to many white supremacists" thanks to his penchant for doxxing as many of them as he can.

So, I dropped Jenkins a line.

“I know it’s a longshot, but is there any way to figure out who the dude in this picture is?” I asked the day after the rally.

“Oh, that’s not a longshot. I know EXACTLY who it is,” came the response from Jenkins, who was driving home from a white supremacy rally in Pikeville, Kentucky on Sunday. “That’s Robert Gaus of the Harrisburg Chapter of Keystone United.

“I know the guy personally so the second I saw the picture, I recognized the back of his head. Everybody who knows KSS (Keystone State Skinheads) knows him. He’s very well known. I’ve encountered him a lot. I have tons of pictures and video of him.”

Several links vouch for the veracity of Jenkins’ familiarity with Gaus, who the Southern Poverty Law Center identifies as a co-founder of the hate group.

Now that I had a name, I reached out to Keystone United via email on Sunday night:

Hello. I am trying to get in touch with Robert Gaus of the Harrisburg chapter. It's in regards to a photo taken at Saturday night's Donald Trump rally that I saw on social media and was told might be of him. If I’m mistaken, no need. If it was him, and he’d like to talk about the attention the photo has drawn, please pass my email along to him.

About 10 minutes later, the group responded that they’d pass it along.

Alas, a Monday morning response – also polite in its wording – dashed my hopes of talking to Gaus about the Trump rally.

We will have to respectfully decline your offer. If you would want to do some type of real interview on what we are about then I'm sure something could be set up.

I told them I’d be interested in hearing more since I’m writing a story about their man being the focus of social-media backlash.

As of 4 p.m. Monday, they haven't reached back out so, if you’re curious to further explore “what (they) are all about,” here’s the “about” page on their site.

If I do hear back from Gaus, this post will most certainly be updated.