Former WWE announcer Jim Ross: 'Philly got me back in the game' 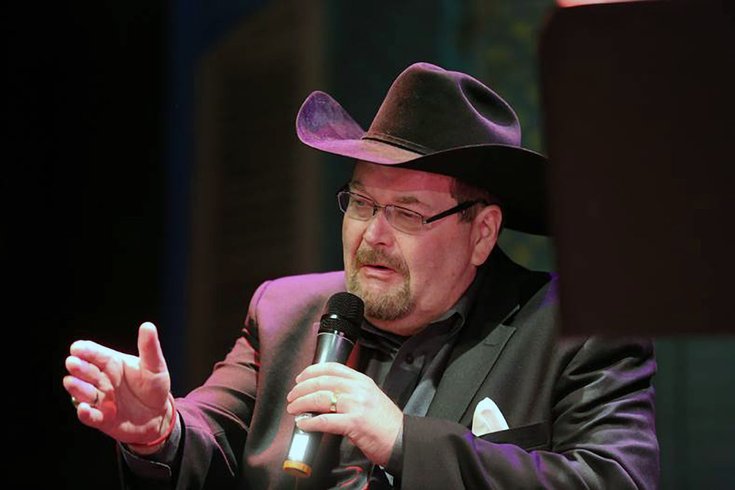 Jim Ross has gone down as one of the great broadcasters in WWE history and will bring his one-man show to Philadelphia in conjunction with the Royal Rumble.

Jim Ross doesn't know what his favorite match is. He can't pick one. When you've called as many big events as he has, it's just too hard.

Better known as "J.R." to wrestling fans across the world, the 63-year old Oklahoman says he gets that question all the time, whether he's hosting a podcast, appearing on a radio show, or hosting a live Q&A -- like the one today at Underground Arts prior to WWE's second-biggest event, Royal Rumble.

There is, however, one match that stands out vividly in his mind, not because of a spectacular finish or a controversial ending, but because of the unexpected reception received from the fans.

The event was Wrestlemania 15 and the fans, well, they were Philadelphians.

"In December 1998, we were in London doing a U.K.-only pay-per-view when my wife called and told me that my mother had died at the age of 64," Ross recalled during an interview with PhillyVoice earlier this week. "My dad died a year earlier, so I had to come home and make funeral arrangements since I was an only child. But I wanted to stay and work; take my mind off it. And during the pay-per-view, I had another Bell's palsy attack."

For those unaware of what Bell's palsy is, it's a neurological disease that can cause facial paralysis. In J.R.'s case, it caused migraines, sensitive hearing, and half of his mouth and tongue to go numb.

"Those fans at Wrestlemania 15 in Philadelphia, they gave me the motivation and the push I needed to get back in the deep end of the water."

"You always worry, 'Am I having a stroke?' because the symptoms are very, very similar," Ross said. "But I knew what was happening. So when I got to the stadium, I had to hold half my face up so I didn't sound like I was doing a bad impersonation of Foster Brooks, like I'm drunk or something.

"But I finished the show, and then flew back to the States and immediately saw a neurologist. Remember, I still had to go from Oklahoma to Connecticut to bury my mother," Ross continued. "You know, after that second bout of Bell's palsy, I thought it was something stress related that was triggering those attacks."

And that's when Ross thought his career as "The Voice of WWE" would come to an end.

Fast forward to March of 1999, three months later. Wrestlemania 15 was about to take place in Philadelphia and Ross, who was still working with the WWE in his continued role in talent acquisition, was going to be there. Two superstars he helped discover were headlining the event for the first time: Stone Cold Steve Austin and The Rock.

Ross discovered Austin during his ECW days, while Austin was making promo videos and working for Paul Heyman in -- you guessed it -- Philly. He signed The Rock after he was cut from the CFL's Calgary Stampeders and had just seven dollars to his name.

"So I guess Steve and Rock got together and pitched the idea to Vince [McMahon] about me doing their match ... and he went for it. He was good enough to say yes," said Ross. "I remember him telling me, 'Be sure you take your tux to Philly this week. I'm gonna put you to work."

And put him to work they did, as he found out upon arrival in Philadelphia. He would be calling the last match of the night, the main event.

"I remember right before I went out someone said, 'Don't get your feelings hurt if they boo you.' I had no idea what they were talking about," Ross said, chuckling. "'You know, this is the town that booed Santa Claus,' he told me."

Then his music -- Boomer Sooner, considering he's lifelong Oklahoma football fan -- started playing, and having not called a match in over three months, he wasn't quite sure what to expect.

"They gave me a standing ovation ... it ran chills up my spine," he recalled. "It was the most amazing feeling that I'd ever had. Of course I got very emotional, teary-eyed."

Ross still had to deal with the after-effects of his Bell's palsy -- he still does to this day -- but after the reception he received, that was the least of his worries that March day 1999.

"They accepted me," Ross remembers. "Even though I didn't look the part, they knew my heart was good. They knew my passion was there."

And that's not even his highest praise of Philly fans.

"It really gave me the kick start I needed," Ross said. "Those fans at Wrestlemania 15 in Philadelphia, they gave me the motivation and the push I needed to get back in the deep end of the water. I came to the realization that day that I can't let other people ... no one should let anyone else ever define you, who you are, what your limitations are, what you can or can't do for a living.

"When I left Philadelphia that day, it was with a real different mindset ... Fans in Philly get a bad rap, but they're passionate. They know what they like and they know what they don't like, and have no issue expressing either way...

"And they got me back in the game."

Ross' career calling WWE matches is likely over, but he's busier now than he ever was. And that's just the way he likes it. From podcasts to his own restaurant and line of BBQ sauces to his one-man show that hits Philadelphia this weekend, Ross couldn't be happier. Unless he was watching Oklahoma win a National Championship.

"I'm probably the busiest retired person you'll ever meet. And I say that with a wink and smile, or at least the best smile I could give you," he jokes. "But I love life. I love where I am right now. And all those years working very hard with all the responsibility, it's paid off."

And as for Sunday's Royal Rumble in Philly, Ross said his money would be on Daniel Bryan.

"I have no inside information or anything," he swears. "I just have a gut feeling ... I think Daniel Bryan wrestling Brock Lesnar [at Wrestlemania] would be intriguing. The monster vs. the underdog."

Or John Cena could win the title. Or perhaps Lesnar loses the pre-Rumble title match, and then jumps someone and enters himself into the Rumble and wins.

"There are a million great storylines that could come out of this," Ross concludes.

Ross won't be calling any matches Sunday. He won't even be at the arena. But he will be in Philly, likely watching on his iPad in his hotel room.

And that's just fine with him.

You can check out Ross's one-man show, "Ringside," at Underground Arts at 3 p.m. Sunday. For ticket information go to axs.com.