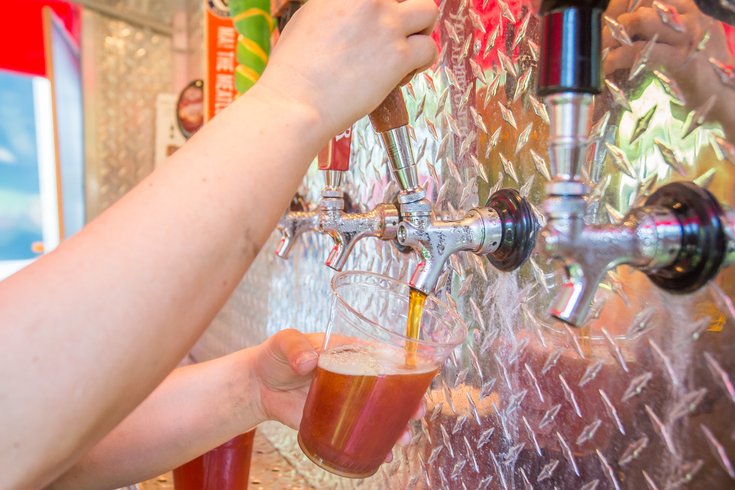 Lea Conti pours a Sly Fox beer at Parks on Tap, but wouldn't have been able to do so at a random food truck in Philadelphia.

I can’t be the only person who’s ever thought, “Yo, why don’t any of these food trucks in Center City serve beer or booze?”

This is especially timely this chilly Monday morning as Philadelphia wakes up and strolls to work with visions of the Eagles coming up short in Seattle dancing through their heads.

Granted, it’s not the best thing in the world – from a public-health standpoint – to ply a population full of booze before the clock strikes brunch.

Sure, it’s easy to load up one’s coffee with Bailey’s, stop into a restaurant with a liquor license or, I don’t know, exercise self control, if you’re so inclined.

But the other morning, as I was strolling from Suburban Station to PhillyVoice World Headquarters, I thought to myself, “A Mimosa would be really nice right about now.” (Some of you may swap “Bloody Mary” into that sentence, but a Bloody Mary is clearly an inferior and – dare I say feral – beverage.)

Picture with me, if you will, Center City food trucks with over-the-counter mini bottles of champagne to mix in the O.J. or knockoff Bailey’s Irish Cream to splash into the coffee cups.

Well, guess what, when I asked around about it, I got a clear answer: It ain’t happening, lush.

The quest for answers started at City Hall. With L&I and the Health Department having oversight over the city’s food trucks, it was a logical launching pad.

Karen Guss, L&I’s director of communications, conceded that “food-truck mimosas sound delightful.” But then she added a caveat: “The City is preempted from regulating the sale of liquor in any way.”

Such activity is overseen by the Pennsylvania Liquor Control Board (PLCB), where Shawn Kelly serves as a spokesman. He did not weigh in on the particular merits of food-truck mimosas, but explained why I was living in a fantasy world.

In order to sell such beverages, a "restaurant (R)" licensee needs to have a building with seating (for 30) and square footage (400). Food trucks obviously do not meet these criteria.

Here’s how the rules break down:

While existing licensees probably wouldn’t much like the competition, I reached out to Rob Mitchell – president of the Philly Mobile Food Association – for his take.

“You’d be breaking the law,” came his initial response when I inquired as to the feasibility of getting a boozy food truck up and running in Philly.

There’s more flexibility in other parts of the country, and the city’s Parks on Tap and various other pop-up events feature alcohol sold by servers with wheels.

State law provides for much of the difference there, and Mitchell – who said he discussed this very topic with food truck experts from across the country recently – explained why via vignette.

Imagine a place called XYZ’s Steak Shack set up an event with Joe’s Burger truck, and they wanted to sell Bud Light bottles.

For that to happen – as happens sometimes with outdoor events – the beer sales would have to be tied to an existing licensee. (If Joe’s didn’t have a license, and XYZ’s did, the beer sold via truck would be tied to XYZ’s license.)

Still, it would have to be a special, privately catered event, not just a morning-mimosa mission on a random Center City corner.

I know, Rob, I know. But it's seemingly one that will never happen in Center City, so just wait till the restaurants open, folks.