Why is gingerbread such a popular holiday flavor?

Nothing quite says "holidays" like wafting in the scent of gingerbread while passing through a kitchen or market.

But how did ginger, of all spices, become such a holiday--Christmas--especially--staple to begin with? After all, there's nothing particularly seasonal about the ginger spice.

Curious, we reached out to Anne Byrn, author of American Cake, who will host a book signing and demonstration at the Museum of the American Revolution this Saturday at 11 a.m.

How did gingerbread get to be such a popular flavor for Christmas/the holiday season?

Ginger used to be a universally loved flavor in cooking, partly because people didn't make sweets unless they could afford white sugar and the less-expensive molasses. So, if you were going to the trouble and expense of baking something sweet, you could probably buy ginger or cinnamon as well.

As dried spices, they kept well until you baked.

Also, aromatic spices like ginger masked the flavor of more crude ingredients in a cake. Mostly, the pearlash--also known as potash--is an early leavener. It had a bitter taste, but it helped the gingerbread rise and become more cake-like in texture. Ginger was also a "stomach-settler," and so hard, crisp gingerbread was baked in port cities and sold to sailors before they headed out on long whaling and sailing voyages. Also, ginger, nutmeg, cloves, and cinnamon were present in the cakes and cookies immigrants brought with them from England, Germany, and Eastern Europe. Baking a recipe full of spice would remind our early settlers of their homeland.

As years passed, the recipes like gingerbread that passed down through generations were always baked for holidays, mostly Christmas. There is a wonderful phrase I found while researching American Cake and it goes something like this: "The holidays preserve what the every day loses." In short, if it were not for holiday baking we would not be hanging onto old recipes like gingerbread.

You write about cake as a sort of American cultural identifier in colonial times, but what do you think it was about gingerbread that caught on? Why would George Washington's sister, for example, be so interested in serving guests gingerbread?

It could have been because gingerbread was a status symbol. As I mentioned, to be able to bake gingerbread you also had to be able to afford the sweetener. It was a way to put your best foot forward, welcome distinguished guests into your home. And it had to have been because it was delicious and exotic and universally enjoyed. Gingerbread caught on in America because no matter your background, you were familiar with the flavor of spices. It was already a part of your cooking repertoire. In colonial times, these old recipes were adapted to ingredients at hand in America. Recipes changed a bit, using molasses instead of British treacle, for example.

Do we have any history of when gingerbread first surfaced in the culinary world?

Look on Page 14 of American Cake and there is a small box at the bottom of the page that begins, "Long Before Colonists Landed..." The Old Austria-Hungarian regions carried down the tradition of baking with spices from generations past. Spice traders brought ginger back to their homelands, and while the use of spices, especially nutmeg, were often in preserving foods, they were also used to flavor foods. So, ginger and other spices were used throughout Europe in baking, but also as a medicine. As I mentioned, ginger was a stomach settler. The late historian Karen Hess said before ginger was used in baking, it was a medicine for queasiness.

Maybe this is a silly question, but why do we refer to the flavor as gingerbread? It's really more of a spiced ginger flavor. It seems weird to define all ginger-flavored sweets with "bread" in mind.

Gingerbread is a large category of baked goods that includes cookies and cakes. In old recipes, the lines are blurred as to what is a bread and what is a cake. The cakes we know originated in Germany--"kuchen." But they needed the leavening like pearlash and, later, baking soda and baking powder, to make them soft in texture and more cake-like. Hard gingerbread doesn't have this leavening and is crisp and more cookie-like. But remember that the Dutch settlers were the ones who brought the idea of a cookie to America. The British, in particular, would not have called these crisp ginger-flavored rectangles "cookies." They would have been called "gingerbread."

As far as combining other spices with ginger, that must date back to the spice-trading days, because if you had ginger, you most likely had access to cinnamon and nutmeg, too.

Is gingerbread a particularly challenging cake/bread to master? What defines a good gingerbread?

Gingerbread--the cake-like type of gingerbread like the Mary Ball Washington recipe (below)--is very easy to make. Remember, it is an old recipe, originating long before KitchenAid mixers came into the kitchen. Ingredients were stirred together by hand. You used wheat flour or rye flour, whatever you had. You sweetened with sugar, cane syrup or molasses. You added the flavor of orange if you were a person of means who could afford citrus. Or you added ground peanuts and lard if you were farmers in Alabama in the 1920s, trying to make a living growing peanuts. The recipe itself is incredibly versatile, allowing anyone to make their own version. It was a recipe that spoke to all people, all backgrounds, young and old, and for that reason it was a recipe that stayed around.

Any fun facts about gingerbread you'd like to toss out?

I like to think of gingerbread as the quintessential American cake. It is a revolutionary cake in that our early-American settlers adapted old European methods of baking gingerbread to new ingredients and ovens. It came to represent this new land where people of all backgrounds could find refuge. If you think about it, gingerbread and its bold flavors have a deep and interesting story to tell. Every gingerbread recipe baked in homes today can speak about the people who first made it. And then, there is the aroma in the kitchen of gingerbread being baked. It just makes you smile. One whiff, and you know the holidays are here! 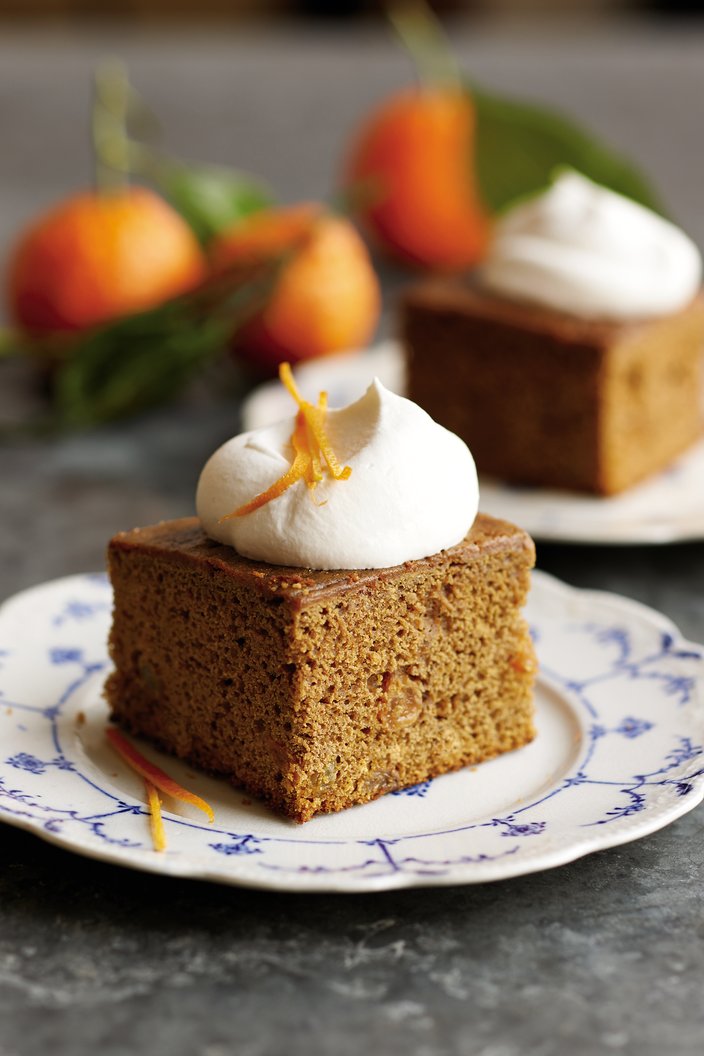 Once sold for 10 cents a copy and now a priceless artifact, this gingerbread recipe has had several names. One was Lafayette Gingerbread, because Mary Ball Washington, mother of George Washington and his sister Betty Washington Lewis, would serve the aromatic cake to guests, including the Marquis de Lafayette during a visit to their home in the late 1780s. Betty would carry on her mother’s legacy by baking the cake at her home, now known as Kenmore Plantation, in Fredericksburg, Va. But time marched on, and the family gingerbread recipe was forgotten—that is until 1922, when Kenmore was deteriorating and the Kenmore Association and Daughters of the American Revolution (DAR) had to find $30,000 for its repairs and restoration. While sorting through boxes in the attic, Emily Fleming and her daughter Annie Smith found a handwritten diary that contained Mary Washington’s gingerbread recipe. They typed and sold copies of the Kenmore Gingerbread recipe to visitors for 10 cents each and negotiated a sweeter deal by selling the recipe to the Hills Brothers Company of New York for $100. Hills Brothers packaged the ingredients as Dromedary Gingerbread Mix, selling it in U.S. supermarkets and providing it at a discount to DAR chapters that sold it to benefit Kenmore. To taste the cake that saved the house, here is the recipe. It is also referred to as Mary Ball Washington Gingerbread, after its creator.

Butter for prepping the pan

2.      Sift the flour into a large mixing bowl. Stir in the ginger, cream of tartar, baking soda, cinnamon, nutmeg, and mace, and set the bowl aside.

3.       Grate the orange zest and set aside. Cut the orange in half and squeeze the juice to yield 4 tablespoons. Add it to the zest in a small bowl.

5.       Turn the batter into the prepared pan, and place the pan in the oven. Bake until the top springs back when lightly pressed with a finger, 35 to 40 minutes. Remove from the oven. Let cool in the pan for 15 minutes, then slice and serve with Vanilla Sauce, if desired.