Why is suicide on the rise in the U.S. – but falling in most of Europe? 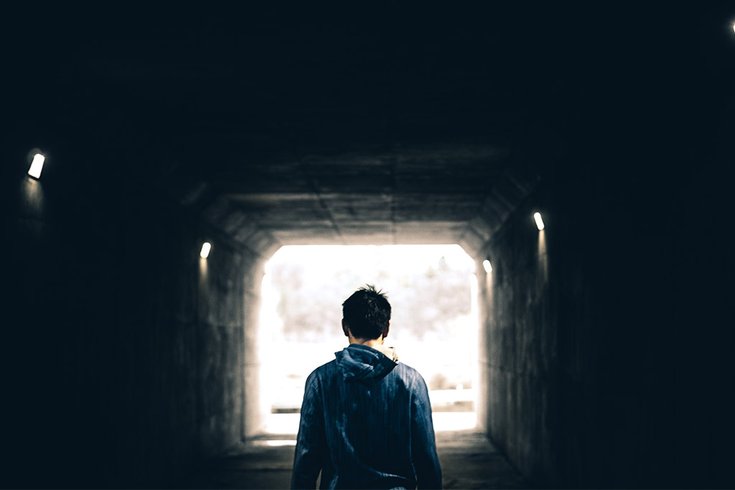 Suicide now ranks in the top 10 leading causes of death in the U.S.

The number of suicides per 100,000 Americans rose 30.4 percent between 1999 and 2015. The increase has not been uniform across all demographic groups. Those in midlife had the largest uptick in suicide. For example, for those ages 45 to 54, the rate increased from 13.9 persons that age to 20.3, or 46 percent, during that period. 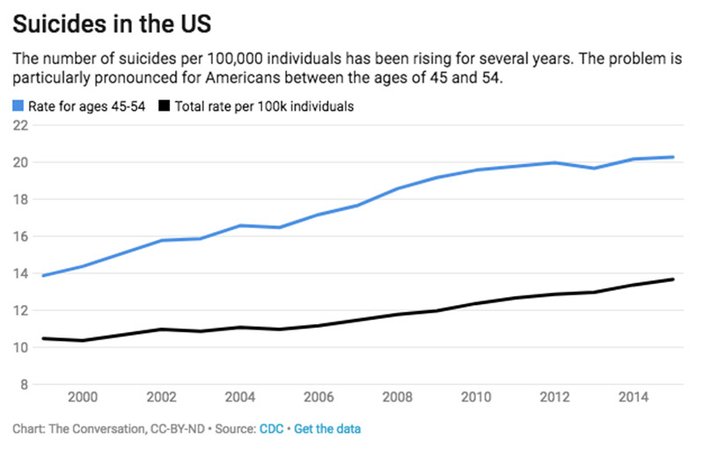 However, suicide rates in other developed nations have generally fallen. According to the World Health Organization, suicide rates fell in 12 of 13 Western European between 2000 and 2012. Generally, this drop was 20 percent or more. For example, in Austria the suicide rate dropped from 16.4 to 11.5, or a decline of 29.7 percent.

There has been little systematic research explaining the rise in American suicide compared to declining European rates. In my view as a researcher who studies the social risk of suicide, two social factors have contributed: the weakening of the social safety net and increasing income inequality. 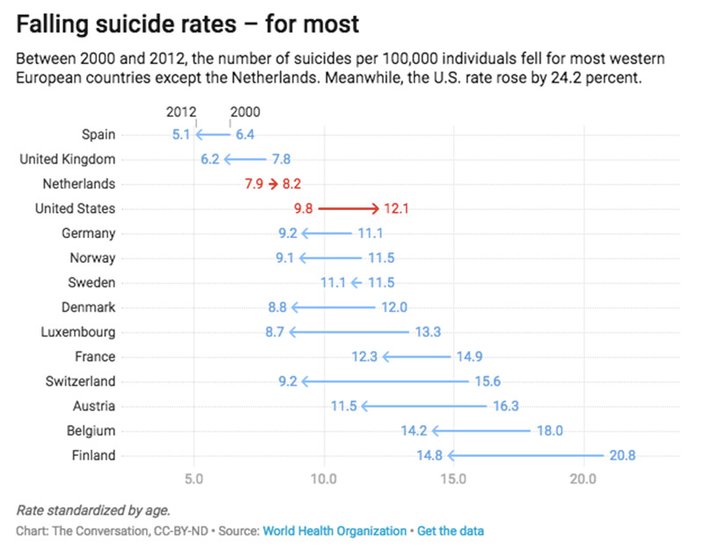 There is evidence that rising suicide rates are associated with a weakening of the social norms regarding mutual aid and support.

In one study on suicide in the U.S., the rising rates were closely linked with reductions in social welfare spending between 1960 and 1995. Social welfare expenditures include Medicaid, a medical assistance program for low income persons; Temporary Assistance for Needy Families, which replaced Aid to Families with Dependent Children; the Supplemental Security Income program for the blind, disabled and elderly; children’s services including adoption, foster care and day care; shelters; and funding of public hospitals for medical assistance other than Medicaid.

Later studies found a similar relationship between suicide and social welfare for the U.S. in the 1980s and between 1990 and 2000, as well as for nations in the Organization for Economic Cooperation and Economic Development.

While their suicide rates are on the decline, three European nations still have rates above that of the U.S.: Belgium, Finland and France. 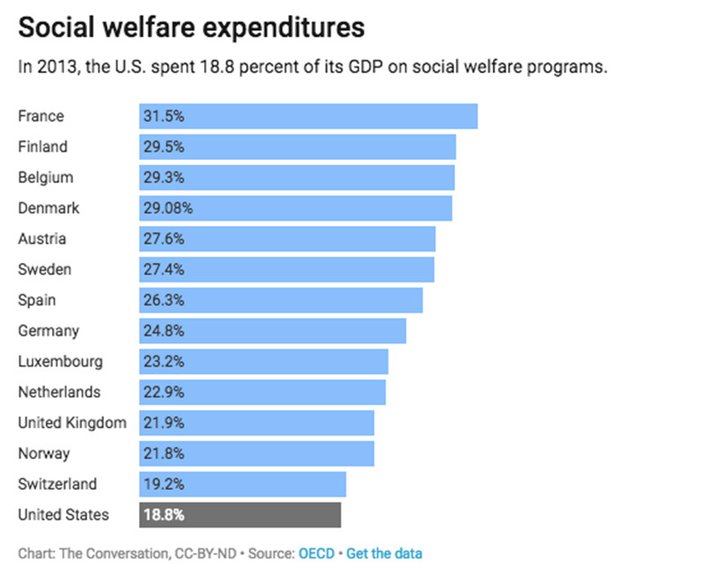 The degree of the gap between the rich and the poor in the U.S. also differs from that of Europe.

Research has generally found that the higher the level of income inequality in the U.S. states, the higher the probability of death by suicide. According to social strain theory, when there’s a large gap between the rich and poor, those at or near the bottom struggle more, making them more susceptible to addiction, criminality and mental illness than those at the top.

Take the GINI index, a standard measure that varies between zero, or no inequality, and one, or a scenario where one household receives all the income. Most European nations fall between a GINI of 0.271 and 0.305, while the U.S. gap between its rich and poor measures at 0.410. That means that, for example, the U.S. has 34.4 percent more income inequality than Austria. This represents a relatively high amount of financial strain faced by U.S. families. 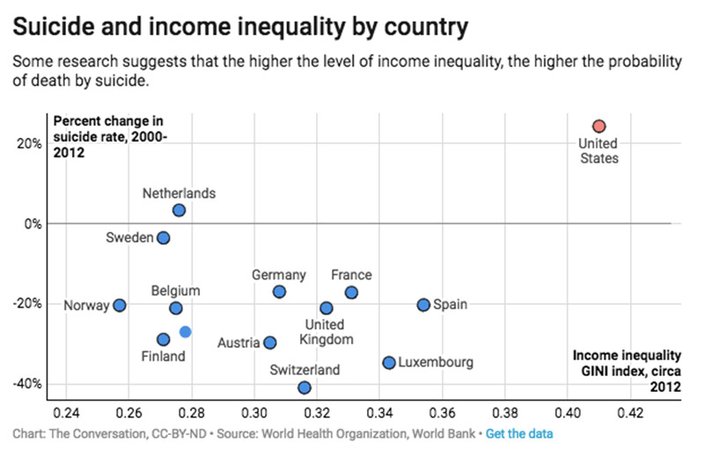 Income inequality in the U.S. has been increasing for several decades. This wasn’t always the case. Between 1928 and 1979, the share of the top 1 percent declined in every state but Alaska. But then, over the next three decades, the average income of the top 1 percent of U.S. families increased by 200.5 percent, fully 10 times the increase seen by the rest of U.S. families.

The ensuing economic strain is a risk factor for suicide. As U.S. income inequality has been increasing, one study found an increasing percentage of midlife suicides reportedly associated with financial problems.

It’s important to note that work on suicide’s relationship to both income inequality and social welfare is scant. Rigorous research is needed to update what we know about the present American context.