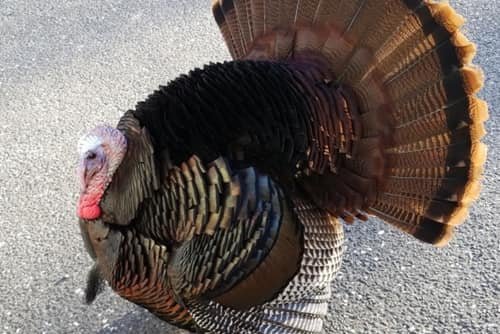 Glenny the wild turkey that had roamed the streets of Haddon Heights, and become a favorite of many residents there was taken from the animal sanctuary he had been brought to this week and euthanized by wildlife officials. The USDA said the turkey posed a disease threat to other domesticated birds on the farm.

The wild turkey that became beloved by many Haddon Heights residents was taken from the animal sanctuary where it had been brought this week and euthanized after wildlife officials determined the bird posed a disease threat to other animals.

Glenny the turkey had roamed the streets of Haddon Heights, Camden County, since the early fall until it was moved to the Funny Farm Rescue in Mays Landing, Atlantic County, on Sunday.

In Facebook posts on Wednesday and Thursday night, Laurie Zaleski, operator of Funny Farm Rescue detailed what had happened, saying her organization had been contacted by Haddon Heights officials and other citizens to pick up the turkey.

Glenny became a local celebrity for his tendency to stand in the middle of the street and fan his feathers. An extremely large wild turkey, he was noticed by many in town, but some worried he was in danger wandering the streets.

"We stepped up when no one else would," Zaleski wrote on Facebook on Thursday. "We called the Southern Region NJ Fish and Wildlife Dept. They gave us permission to take Glenny to the Funny Farm which we did. That would have been the happy ending until some citizens felt Funny Farm acted out of line and contacted the State of NJ."

She continued, "We have rescued many wild turkeys, Canada Geese, and other wild birds who were all set free at the Funny Farm. Glenny was going to be released and allowed to go and fly wherever he wanted in a huge wooded area surrounding the Funny Farm."

Wildlife officials showed up at Funny Farm Rescue on Wednesday and took Glenny away. The U.S. Department of Agriculture confirmed Glenny had been euthanized Thursday because the turkey had been "in contact with domestic birds and presented a disease risk to native wildlife,” the Inquirer reported. The USDA said the move was done in agreement with the New Jersey Division of Fish and Wildlife.

Officials explained Glenny should've been quarantined before being placed on a farm with domestic turkeys. Glenny was a wild turkey, and he potentially carried diseases that threatened other birds living on Funny Farm.

"He was not a wild turkey, he was a socialized turkey," Zaleski told the Inquirer. "We came up with a solution and then they came and snatched him."

Funny Farm announced the news about the turkey in a Facebook post on Wednesday, which was filled with comments from town members mourning his death.

"This is the worst outcome. I’m sick over this... we took his home away from the start – thus why all the turkeys are taking up residence in Heights anyway," one Facebook user wrote. "When they knocked down all the woods to expand (Route) 295, the wildlife had to go somewhere."

On Saturday morning, Zaleski was advocating a new federal law, called "Glenny's Law," to avoid situations like this in the future. "No parent should ever have to explain to their kids how a friendly turkey named after their elementary school was killed for no reason," she said. Glenny got his name from Glenview Elementary School where he was often seen in Haddon Heights.

New Jersey Assemblyman John J. Burzichelli, a Democrat representing parts of Gloucester, Cumberland and Salem counties, called for a review of the how the Glenny situation was handled by the USDA.

"There were many other options the U.S. Department of Agriculture could have exercised instead of killing 'Glenny.'" Burzichelli said. "At the very least, it could have been quarantined and tested to ensure it was not a threat to other wildlife. Euthanizing an animal should be the last resort. It was an insensitive act in the eyes of the children and the residents who grew attached to Glenny.

Wild turkeys have captured the attention of residents in other parts of Jersey as well, in places like Toms River and Teaneck. In November, group of Teaneck animals were nicknamed "Gangster Turkeys," for causing all kinds of destruction, including breaking windows.