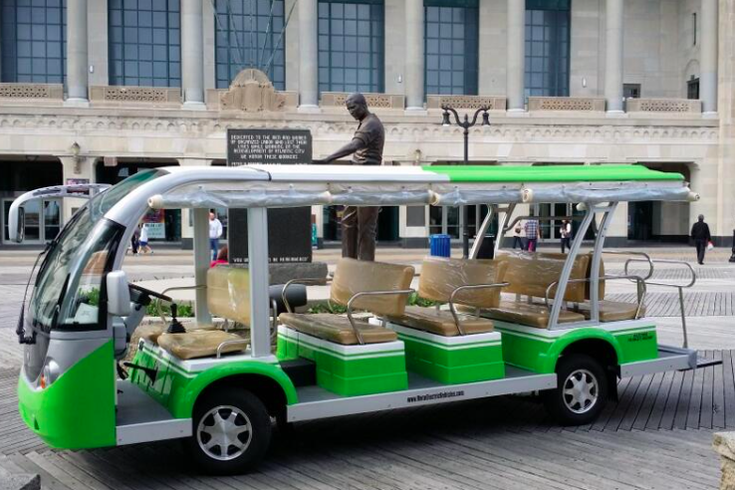 UPDATE, 4:55 p.m. – NBC10 is reporting late this afternoon that the tram cars on the Atlantic City boardwalk have started to use a new recording – the same phrase in a different voice. It is unclear if that will satisfy officials in Wildwood who had reportedly sent the tram car operator a cease-and-desist letter and suggested a recorded phrase.

Wildwood's iconic phrase is causing a quarrel between two boardwalks along the Jersey Shore. Wildwood is claiming that Atlantic City, which debuted an electric tram car service on its boardwalk in March, is using its famous saying.

NBC10 reported on the squabble last Friday and quoted an official of B&B Parking, which operates the tram cars in Atlantic City, saying the recording would be changed by Monday.

Wildwood officials raised concerns last week against the use of the phrase and have threatened to bring legal action against Atlantic City and the tram car operator if the recording is not removed.

But the recording was still being used as of Wednesday, the Press of Atlantic City reported.

Tim Boland, the owner of B&B Parking told the Press that there have been delays in making a new recording:

“It hasn’t been pulled yet,” he said, noting there were safety concerns about operating the trams without any recording to warn those on the Boardwalk to make way. “We are working on an alternate recording. We are hoping to have it done by the end of the week. It will stay very similar, just a different voice.”

Patrick Rosenello, executive director of the Wildwoods Special Improvement District, said the phrase has been used by Wildwoods since 1949.

The dispute is receiving mixed reactions from residents in both shore towns.

"When I hear it, I think of Wildwood. I don't think of Atlantic City for sure," one resident told Fox29.

But Atlantic City resident Vincent Gagliardi told the news station he doesn't get it. "It's stupid. I mean it's a matter of safety," he said."It's dumb. Outright dumb."

Rosenello's attorney reportedly sent a letter to the AC tram operator asking them to cease and desist. Wildwood officials have suggested "Please watch the tram car" as a replacement.