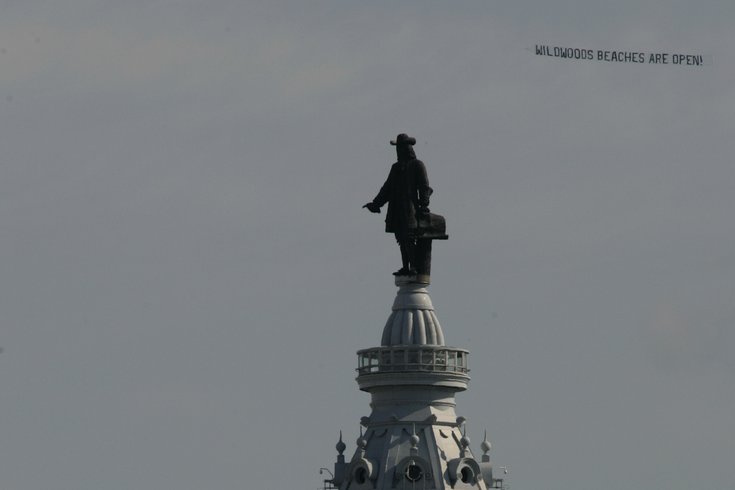 A banner-towing plane flies past the statue of William Penn atop City Hall in Philadelphia, Thursday, July 6, 2006.

Billy Penn, who oversees Philly from atop City Hall, is getting a much-needed bath.

The National Endowment of the Arts announced Tuesday the statue of Pennsylvania's founder will be restored, courtesy of a $25,000 grant.

Well, not entirely — that's in addition to $125,000 in private funds and $100,000 from the city, according to The Philadelphia Inquirer. Moorland Studios, of Stockton, New Jersey, will perform the conservation work, which will be completed in late August.

Philadelphia Public Art Director Margot Berg told the newspaper Penn needs a cleaning and inspection — washing with detergent, scrubbing, checking up on the bronze, applying a corrosion inhibitor and a new wax coat — about every 10 years.

She told the Inquirer the statue serves as an important symbol for the city:

"We think of this sculpture as sort of the iconic piece in the city," Berg said. "It's very symbolic for Philadelphia, and it's important for us to maintain so visitors and residents for generations to come are able to enjoy seeing the piece and visiting the observation deck and looking up at him."

Penn's bust, which is more than 36 feet tall and weighs more than 53,000 pounds, was completed by sculptor Alexander Milne Calder in 1892 and hoisted to the top of City Hall two years later, according to the Association for Public Art.

The statue also served as the focal point of one of American sports' most infamous curses, as the construction of the One Liberty Place skyscraper in the late 1980s broke an unwritten agreement not to build anything taller than Penn in the city. The curse was seemingly lifted after the Phillies' 2008 World Series title — potentially thanks in part to the placement of a tiny Billy Penn on top of the Comcast Center in 2007.