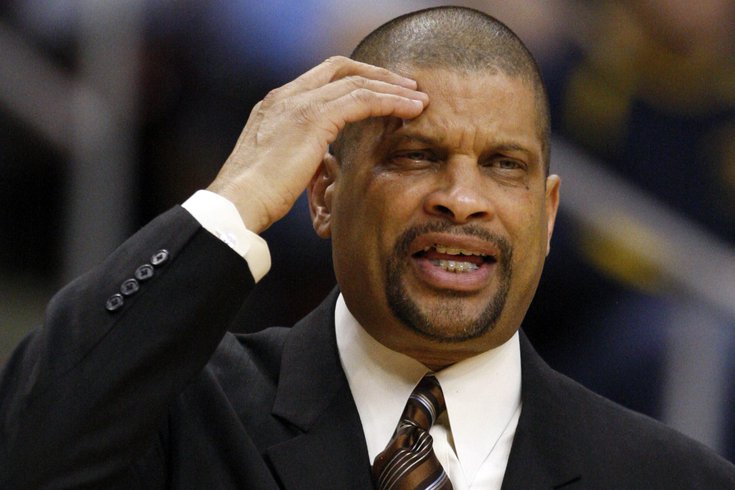 Eddie Jordan looking confused as his players were running the Princeton offense.

It's Worst Week on PhillyVoice! On Monday, I talked about the worst games I ever attended, a South Philly doubleheader from hell. On Tuesday, I wrote about a 2015 Eagles stinker and the collapse of the Chip Kelly era. Being angry gets my juices flowing!

I'm going to tackle one of the worst coaches I've ever seen during my time watching Philadelphia sports. He's a bit of a forgotten man, coming in between the departure of Allen Iverson and the Process years, but he's a figure who nevertheless haunts hardcore Sixers fans: Eddie Jordan.

Jordan was yet another Sixers head coach during my lifetime who lasted a max of one year on the bench, joining the illustrious crew of Johnny Davis, Randy Ayers, Chris Ford, Jim O'Brien and Tony DiLeo.

The Sixers hired Jordan ahead of the 2009-10 season. He was coming off a six-year stint with the Wizards where he went 197-224 and was canned shortly into the 2008-09 season after a 1-10 start. That is obviously a guy that an organization needs to throw all their resources at! This was during the time when Comcast Spectacor, an organization that only cared about hockey, owned the Sixers. For as much as Sixers fans (rightfully) give Joshua Harris grief, hey, at least he treats the franchise as a legitimate thing. Comcast treated the Sixers as flippantly as they did an indoor lacrosse team.

Hiring Jordan was as if ownership was trying to construct the worst possible organization it could. This wasn't a Sam Hinkie tank job though. It was a foolish decision that led to 82 mind-numbing basketball games for me to watch as a high school sophomore.

The 2010 NBA season was right before a changing of the guard. The Mavericks would win a championship the next season with a plethora of shooters firing up threes. The Heat would play small-ball on their way to the 2012 title. Stephen Curry made his first All-Star team in 2014 and the rest was history. Jordan, however, despite these revolutionary elements on the horizon, deployed the archaic Princeton offense that Pete Carril popularized in the Ivy League in the '70s and '80s.

Basketball dorks like myself were calling for more three-point shooting. The Sixers decided to prioritize back-door cuts like they were a 16 seed trying to upset Georgetown. Shocker: it didn't work, as the Sixers won just 27 games, their lowest total since Iverson's rookie season in 1997.

Apathy was high for the Sixers. This was an era where the Phillies were yearly championship contenders, Andy Reid still consistently had the Eagles in the postseason and the Flyers were about to go on a Stanley Cup run. Then there were the Sixers. The lowly Sixers, a team whose past glory had been entirely stripped away. I loved (meaning I hated it) seeing cars drive around the city with three stickers on the back windows: a Flyers sticker, a Phils sticker and a Birds sticker. The Sixers couldn't even get their props from a minivan driver!

Though both national and local talking heads thought otherwise, there was something way worse than the Sixers' tank-filled seasons with slop basketball: irrelevance. The Sixers were a lightning rod during those Process years, but it's better to spawn debates and draw ire than for no one to care at all. That was the 2010 Sixers. No one cared. Why should they have? There was no reason to. The optimism that success was supposed to come from the Process at least served as a guiding light. What was there to be optimistic about in 2010? My dream was for the owners to at least sell the team to a group of people with a pulse!

The Sixers obviously cause headaches for their fans and this string of second-round exits is rough, but being able to watch Joel Embiid compete and Tyrese Maxey blossom is a hell of a lot better than a complete afterthought.

Were the Sixers rewarded with a high draft pick because of this disastrous campaign? They were actually! The team landed the No. 2 pick in the 2010 NBA Draft, higher than any pick the Sixers had during the Hinkie era. They ended up with Evan Turner, the Eddie Jordan gift that kept on giving after three-and-a-half lousy years in Sixers red, white and blue.

The runner-up I considered for this: Ryne Sandberg, who quit on the Phillies in the middle of the 2015 season when they had the worst record in baseball. I'm sure some Phillies fans wouldn't hate it if Joe Girardi did that.