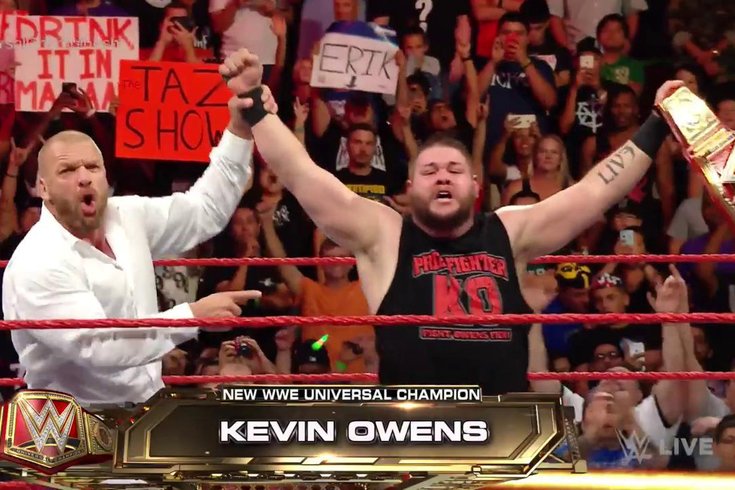 Kevin Owens, with the help of Triple H, captured the WWE Universal Championship on Monday night in Houston.

I took it as a sign for the future, when Bálor returns to reclaim the title he never lost and McMahon just kind of rubbing his face in it because she’s, you know, a heel. Some people got upset because some still take professional wrestling too seriously. For me, it’s all about a wait-and-see approach.

There’s a reason McMahon purposely didn’t mention Bálor as the former champion. Michael Cole on commentary made reference to him, and they even showed his injury in the opening promo as Raw went on the air. It’s not to disrespect Bálor. It’s to build to something down the road.

Before we hit Raw, I want to touch on Mr. Fuji. Or, as I knew him growing up, that mean Japanese man who kept throwing salt in the eyes of the wrestlers I liked. Fuji died over the weekend at the age of 82. He was a WWE Hall of Famer, and known for being a five-time WWE World Tag Team Champion, three times with Toru Tanaka and twice with Mr. Saito. It may have been before my time, but I go back and watch old wrestling shows all the time. He certainly was one of the few older guys I enjoyed watching immensely.

Fuji, real name Harry Fujiwara, wasn’t a mean Japanese man. He was actually a Japanese-American who was born in Hawaii. And, according to everyone who’s ever worked with him, one of the finest people they’ve ever met. He became a Hall of Fame manager after a Hall of Fame career inside the ring and managed some of the best wrestlers and tag teams when I started watching wrestling.

Kevin Owens reaches the top of the [Raw] mountain

Raw began with a sort of town hall meeting, so to speak. Each individual involved in the Fatal Four Way was sitting in chairs with Corey Graves asking questions. All it really was was an opportunity to get the fans to see all four go at it before the main event. To whet the appetite, if you will.

Throughout the show, they aired solo video packages and interviews of each guy, making the anticipation for the main event even greater as the show went on. It was a great way to build to a television main event that could have been saved for the Clash of Champions pay-per-view in September. But I’m sure glad we got to witness it on Monday night.

The match started out like we’re sort of used to seeing, but after the first commercial break, things picked up. We saw Rollins and Reigns dive to the outside and some really close near falls after two commercials – COME ON USA NETWORK! – during the match. The people kept thinking and thinking Reigns was going to win, and he got a lot of offense in, so it wouldn’t have been a surprise.

Big Cass is doing phenomenal work as a main roster rookie, but he was the first guy eliminated from the match. After Rollins hit him with a superkick after Reigns’ Superman Punch, Cass kicked out of the pin attempt but then got hit with Owens’ frogsplash and was down for the count.

Shortly after, Reigns got the advantage on both Owens and Rollins on the outside of the ring. After spearing Rollins, Reigns was ready to pick him up and put him back in the ring, but Triple H returned and hit the Pedigree on Reigns on the outside.

We haven’t seen Triple H since WrestleMania, where he lost to Reigns in the main event for the WWE World Heavyweight Championship. At first, it looked as if maybe the COO of WWE was out for revenge. He threw Rollins back in the ring and threw Owens back in the ring. It looked like The Authority of old was about to reunite.

But that didn’t happen.

Triple H kicked Rollins in the gut and stared at Owens, shook his head slightly, then gave a thunderous Pedigree to his former protégé. Owens, shocked by all of this, would pin Rollins and win the WWE Universal Championship.

He celebrated with Triple H and then by himself as Raw went off the air. Despite being a pro wrestling heel, the crowd chanted, “You deserve it!”

What does this mean for Reigns and Rollins? There was no Rusev on the show, so maybe Reigns will revisit his feud for the United States Championship. Does Rollins become a top face now after being one of the best heels for the last year and a half? Does Sami Zayn get elevated to continue the seemingly endless feud he’ll always have with Owens? I’m excited to find out the answers to all of these questions as we move into the fall.

What role will NXT have in this?

People wasted no time, myself included, in putting together their own dream scenarios. Mine was what if this is a build to some type of NXT angle? Triple H is the face of NXT and proudly shares credit for its success and with the wrestlers who have made it what it is today.

While he has a long, excruciating path to recovery, Bálor gave his immediate thoughts after he went under the knife to fix his shoulder last week. The injury was actually much worse when the doctors opened him up, and he said the chances of a 4-month return time were “crushed.”Hopefully WWE will be posting more updates on Bálor throughout the weeks and months ahead, because when he returns, I expect nothing less than him being a major player on the Raw roster.

Heyman tried explaining to McMahon how Lesnar beating Randy Orton at SummerSlam was a win for the Raw brand. He said he’d pay Lesnar’s $500 fine, and began paying in one dollar bills. Obviously, not thrilled by Heyman’s insulting way of paying the fine, McMahon asked what value Heyman provides her since Lesnar provides the Raw brand with plenty.

She said a storm was coming, and Heyman agreed. That storm was Lesnar himself. Heyman apologized to the Raw commissioner because he knows the compromising position she’s in with the board of directors, chaired by Vince McMahon himself.

The commissioner accepted his apology and walked off, with Heyman having a sly smirk on his face. We’re not done here yet.

Now Sheamus and Cesaro finally have something to fight over. Last Monday, it was revealed that the winner of this best-of-seven series will get a shot at the WWE Universal Championship.

Sheamus and Cesaro are two of the more physical performers in WWE, so this series of matches will be brutal on their bodies. And that proved to be true on Monday night as Cesaro suffered contusions to the lumbar spine, according to WWE.com.

Is it legit? Who knows? It makes for a great storyline either way. Cesaro is already facing a 2-0 deficit and is now the underdog in the series. Having him come back to win the series and get a shot at the title would be great storytelling, even if he isn't in line to become champion.

When Bayley arrived at the arena on Monday, she ran into the WWE World Tag Team Champions in the back. She was all about having a good time with The New Day until Dana Brooke showed up. This set up a six-person mixed tag match between Bayley and The New Day against Brooke and Luke Gallows and Karl Anderson, where Bayley got the win for her team after hitting Brooke with the Bayley-to-Belly.

Brooke with Gallows and Anderson isn’t a bad thing, and I’m wondering if they’ll continue together as a group. They could move her away from Charlotte because she’s not really doing much other than just being her sidekick. Hopefully, WWE will give her a chance to do more with The Club.

• Darren Young defeated Titus O’Neil with a crucifix roll up. O’Neil attacked him and Bob Backlund after the match.

• Sami Zayn took down Jinder Mahal in a glorified enhancement match for Zayn.

• Chris Jericho d. Neville by submission via the Walls of Jericho.

• Nia Jax d. Hyan by pinfall via the Attitude Adjustment. For real. I don’t know what else to call it.

• Braun Strowman d. Americo by pinfall via a flapjack off the ropes.

o Owens eliminated Big Cass by pinfall via a frogsplash.

o Rollins eliminated Reigns by pinfall after Triple H returned and hit Reigns with the Pedigree outside the ring.

o Owens eliminated Rollins by pinfall after Triple H turned on Rollins and hit him with the Pedigree.