WWE SmackDown rundown: The Ambrose-Ziggler feud is heating up 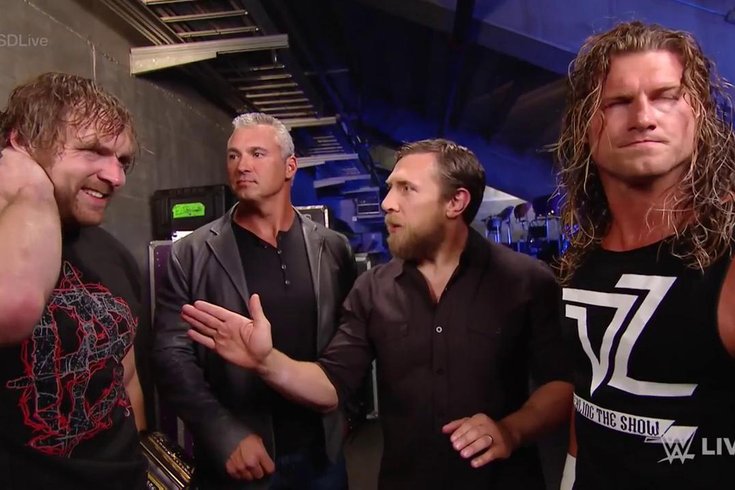 Dean Ambrose and Dolph Ziggler teamed up on Tuesday night to take on Bray Wyatt and Erick Rowan.

The Rabobank Arena in Bakersfield, Calif. Tuesday night was the host for SmackDown as we inched closer to SummerSlam in Brooklyn on August 21.

Lacking the top stars in John Cena and AJ Styles, this episode of SmackDown tried to make up for it with two good women’s matches, a good main event, and really pushing American Alpha as the, well, alphas of the tag team division.

Ambrose and Ziggler team up against Wyatt and Rowan

In almost a sort of throwback to old SmackDown episodes of the past, the main event on Tuesday night was a tag team affair, showcasing opponents at SummerSlam teaming up to take on Bray Wyatt and Erick Rowan.

The WWE World Champion Dean Ambrose came out after Wyatt, with Rowan, opened the program with a promo saying it’s Wyatt vs. the world. He called Wyatt a baby and Wyatt challenged him to get in the ring with him.

Ambrose was too smart for that. But, apparently, Dolph Ziggler wasn’t. Ziggler came out and stared down the champion before heading into the ring and getting assaulted by Wyatt and Rowan. Ambrose eventually came into the ring to help Ziggler, but he wasn’t happy about it.

Wyatt would eventually get Ambrose in position for Sister Abigail, and fluidly moved him in the way of a Ziggler superkick attempt and Ambrose went down.

Backstage, general manager Daniel Bryan and commissioner Shane McMahon booked the two together in a tag team match against Wyatt and Rowan in the main event.

It was a good television main event, and it became the Ziggler show once again as he picked up the victory after hitting a superkick on Rowan for the three. After the match, Ambrose nailed Ziggler with Dirty Deeds, much to delight of the crowd.

Ready for Styles vs. Cena II?

American Alpha the crown jewel of the tag team division

Jason Jordan and Chad Gable took on a couple of jobbers in their second week, but it was what happened after their match that had people talking. Jordan and Gable made quick work of the “Mikes” as I like to call them – Mikey O’Shea and Mike Vega.

Before the match started, three other tag teams made their way down to the ring to get an up close and personal look at what’s probably considered the best tag team on the SmackDown roster already. The Ascension, The Vaudevillains and the Hype Bros. came out and, yes, that pretty much showcased the entire tag team division.

After Jordan and Gable defeated the Mikes, a full out brawl broke out but American Alpha held their own and cleared the ring.

JBL noted on commentary about the tag team championships that were soon coming to SmackDown, and I just could not help but shake my head. Introducing a tag team title and a women’s title at this juncture is absolutely ridiculous. The roster needs to fill out more because having titles in a division where there’s only six or seven people competing for them is ridiculous.

And, yes, I know if you want to compare this to sports, it’s similar. However, I’m used to professional wrestling and we’ve never seen something like this before. Maybe it’ll blow my mind and it’ll be a great decision. But, right now, I think it’s ridiculous.

Eva Marie was set to make her re-debut on Tuesday night, a week after leaving the ring before her match with Becky Lynch with an apparent leg injury. We came to find out that was all in storyline and no serious injury occurred, so The Red Queen was set for battle against Lynch once again.

But that didn’t happen.

Marie suffered a “wardrobe malfunction” and she was sent backstage to get her top’s straps fixed. Meanwhile, Alexa Bliss came out and challenged Lynch to a match, and the Irish Lass Kicker obliged.

This was a very good match and a good showing for not only Lynch, but Bliss as well. It looks like WWE is trying to get over some new talent and Bliss’ victory with Twisted Bliss proves that. Marie’s music hit and she came out with a repaired top, causing Lynch to be distracted and allowing Bliss to capitalize.

Don’t worry, though. We’ll see The Red Queen in action before long. Apparently.

The one big criticism of Carmella has been her reliance on the Enzo Amore-type gimmick she’s been using. But, I’m not sure why that’s a bad thing. She’s been with Enzo and Cass in NXT, and with them tearing it up now on Monday nights, Carmella needs some personality to get over on Tuesday nights.

Not many people seem to dig it. Not the live audience and not the people watching at home. It’s a shame. Carmella is a talented wrestler and I never saw anything wrong with her character, despite being labeled a ripoff of Amore.

But the time might be right for Carmella to begin doing her own thing. The crowd isn’t exactly responding to her the way they are Enzo and Cass. Maybe that should have been expected all along since WWE has done nothing to build her up or given the audience a reason to care about her. She’s not getting the same reaction Enzo and Cass are, so it might be time to try something different.

Despite all of that, she notched a big win against Natalya with her submission leglock choke hold that she calls the Code of Silence. It was an unexpected win, but this could be the beginning of pushing the next generation of women’s wrestlers from NXT on SmackDown while Raw’s women are the here and now.

• Randy Orton was in action against Alberto Del Rio, who promised to break his arm. But he didn’t. But he did hit Orton with a steel chair to disqualify himself in the match.

• Heath Slater’s still working for a WWE contract. At this point, he just doesn’t seem to care where: Raw or SmackDown. He took on Rhyno – who won a Michigan primary last Tuesday – but didn’t have much luck.

• Randy Orton d. Alberto Del Rio by disqualification after Del Rio hit him with a steel chair on the outside of the ring.

• Rhyno d. Heath Slater by pinfall via the Gore.

• Carmella d. Natalya by submission via the Code of Silence.