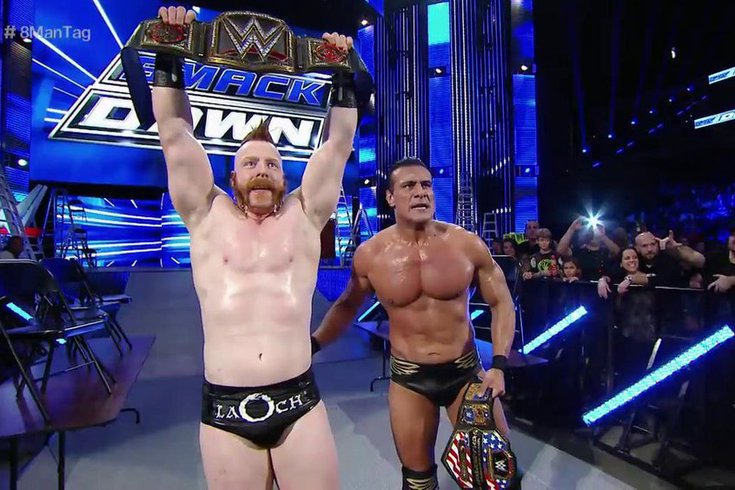 Despite his team suffering a loss Thursday night, Sheamus held his championship high as SmackDown ended.

Three days away from the TLC pay-per-view, the Jacksonville Veterans Memorial Arena in Jacksonville, FL hosted the final WWE television show before then on Thursday night. Roman Reigns will vie for the WWE World Heavyweight Championship in a TLC match against Sheamus, but the two would tango on Thursday night just days before their title encounter.

Kevin Owens and Dean Ambrose had a nice confrontation, and I have a feeling that match might steal the show on Sunday night. You can check my TLC preview out to see who I think wins that one.

Here are the main stories coming out of SmackDown on Thursday night:

Third loss is the charm for the League of Nations

Reigns and Alberto Del Rio kicked off the program with a pretty good match, though it doesn’t mean anything in the long run. Hell, it doesn’t mean anything in the short run, either. The match saw a big schmozz ending, with Del Rio’s cronies in the League of Nations brawling with Reigns’ cronies in Ambrose and the Usos. This would lead to the main event, which would feature Reigns, Ambrose and the Usos in an eight-man tag team match against the League of Nations.

Eight-man tag team matches have become so boringly predictable. Reigns got the win for his team after spearing Rusev.

ALL SMILES as @WWERomanReigns looks to reclaim the @WWE World Hvt. Championship at #WWETLC! #SmackDown pic.twitter.com/cBunCV8S05

Reigns was all smiles after the main event, but he won’t be all smiles after Sunday night. As for the League of Nations, that’s their third big loss in two weeks as a unit. Not so hot a group now.

Owens and Ambrose make it official

Speaking of Ambrose, a contract signing for the Intercontinental Championship match at TLC was scheduled between the champion, Kevin Owens, and the challenger. Owens did not show up for the beginning of this segment, so his attorney, Matthew Douglas, was representing him. His statement, read by Michael Cole, stated the following: “I have instructed our client, Mr. Owens, who will not be at SmackDown tonight, that this is not a safe working environment and therefore, his presence is not warranted for tonight’s contract proceedings. Ergo, our client has granted us power of attorney to execute said contract making the match official.”

Ambrose really didn’t have time for Owens’ game, and was ready to sign the contract before Owens attacked him from behind, much to the surprise of nobody except the five-year old Reigns fan in the front row. Ambrose and Owens traded offense before Owens ran off and Ambrose signed the contract, but not before giving Mr. Douglas a Dirty Deeds.

Charlotte – heel or not?

No heel turn for Charlotte? Or, maybe still? Who knows. During a match between Paige and Becky Lynch on Thursday, Charlotte’s music hit and she made her way to the ring.

Lynch was able to capitalize and make Paige submit to the Disarmer. It’s like Lynch finally realized what Charlotte meant by teaching her how to play dirty in the ring. That certainly wasn’t a babyface type of win for Lynch, so I’m interested to see where this storyline goes.

Can the Lucha Dragons repeat history on Sunday?

The Lucha Dragons had their chance at The New Day in a non-title match Thursday night and made the most of it. The high-flying tandem kept the champions at bay, and they would shock the world and defeat them after Kalisto nailed Xavier Woods with the Salida del Sol. I’m not sure anyone saw that coming, but I can guarantee you one thing – the Lucha Dragons won’t be walking out of TLC as WWE Tag Team Champions now.

Though, honestly, the Lucha Dragons are probably the furthest thing from the champions’ minds.

• Dolph Ziggler d. Tyler Breeze by pinfall via a superkick.

• Handicap Match: Ryback d. The Ascension by pinfall via Shell Shocked on Viktor.

• Becky Lynch d. Paige by submission via the Disarmer.