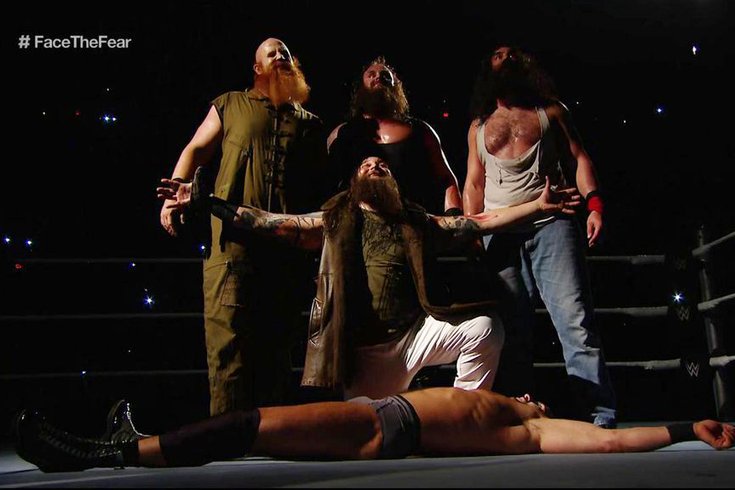 It’s been a banner week for WWE. First, a great Hell in a Cell event, followed by a fantastic Monday Night Raw, and now a SmackDown that really was entertaining with good in-ring action. It’s been a long time since a full week of WWE television hasn’t felt like a chore to watch. Is that because John Cena is gone for a while?

The Talking Stick Resort Arena in Phoenix, AZ hosted the Halloween edition of SmackDown on Thursday night, and it was the return of the infamous Trick or Treat Street Fight. When Bo Dallas is dressed as a ghost trying to scare people backstage as “Boo” Dallas, and gets knocked out by Mark Henry, it’s always a good show.

Bray Wyatt, fresh off abducting Undertaker and Kane, opened the program with a promo. He said he owns the souls of the Brothers of Destruction, and challenged any three superstars to take on his family while he takes a seat at ringside to watch.

Dean Ambrose, Cesaro and Ryback would answer the challenge and give the Wyatt Family a hell of a fight in the night’s main event. Cesaro continues to just get monster pops, along with Ambrose. Ryback? Not so much. But that didn’t make the main event any less entertaining. This is the type of six-man tag I’d like to see every week, not the cookie-cutter tag matches WWE puts together that always end the same way.

Wyatt helped his brethren by interfering, allowing Harper to hit Cesaro with a clothesline for the pin. The Wyatt Family stood tall to end the program. Having the Wyatts end the Halloween episode like that was simply awesome. It’s a small things, but those types of things add up.

The No. 1 contender to Seth Rollins’ WWE World Heavyweight Championship, Roman Reigns, came out and gave a pretty good promo on his climb back to the opportunity to win the championship. As much as he’s been knocked down, he was never out, and he’s back on track.

The man who Reigns pinned to become No. 1 contender, the Intercontinental Champion, Kevin Owens, interrupted him. The champion said it was a fluke that Reigns beat him on Monday Night Raw and Reigns was lucky to win. This set up the first match of the night, a non-title affair between Reigns and Owens, which in the future might be the biggest money match WWE has in its back pocket. For now? I have no problem with the two facing off against each other.

The match had the right ending, also. Owens kept his heat by running away, and Reigns looked strong. These two aren’t ready for a main program together, but once Reigns has that WWE World Heavyweight Championship, Owens would be a perfect opponent in 2016. That’s a mega match in the making, and we saw a glimpse of it Thursday night.

Alberto Del Rio and Zeb Colter have officially renamed the United States Championship to the MexAmerican Championship – something I think it actually pretty awesome.

Not sure why we had a random Trick or Treat Street Fight between Dolph Ziggler and The Miz. I like the concept, and I’m always a fan of themed shows, especially this time of year, but Ziggler and Miz have no beef at the moment. Why put them in a Street Fight? All I could guess is that it was originally supposed to be Ziggler-Rusev, but when Rusev was injured during the Main Event taping with a reportedly torn bicep, plans changed.

What attack? @RealSummerWWE and @MmmGorgeous just came to the ring to take a selfie. #SmackDown pic.twitter.com/XZcssTTq9n

I did, however, like that Tyler Breeze came out and attacked Ziggler again.

The Tag Team Terror Four Corners match was kind of cool, if only for the Tag Team Champions, The New Day, who joined commentary.

The unicorns have taken the stage! #NewDay #SmackDown pic.twitter.com/qde3Wcftgv

They donned their new unicorn head gear, which I sincerely hope is available on WWEShop.com soon enough. What’s also notable is that it appears Sheamus and King Barrett is an official tag team, as they’ve been together on various occasions now. I’m assuming the two will continue teaming up until Sheamus finally cashes in his briefcase, and hopefully loses.

The Lucha Dragons actually notched a victory here, and pinned Viktor of The Ascension. No surprise here.

Paige beat Natalya in an okay match, but to me, the big story was Sasha Banks, Naomi and Tamina coming down to ringside and attacking Natalya. Will they be uncovered as the people who attacked Natalya backstage a couple weeks ago? If not, why would they just randomly attack her now? If anything, this makes me feel a bit better about Paige and her focusing on Charlotte and the Divas Championship. She doesn’t need a feud with Natalya. But, then again, neither does Sasha Banks.

• Non-Title: Roman Reigns d. Kevin Owens (c-IC) by countout after Owens leaves the ring after being hit with the Superman Punch.

• Tag Team Terror Four Corners Match: Lucha Dragons b. The Dudley Boyz, The Ascension, and Sheamus & King Barrett by pinfall when Kalisto pinned Viktor after hitting him with the Salida Del Sol.

• Paige d. Natalya by pinfall via the RamPaige. After the match, Team B.A.D. attacked Natalya in the ring.

• The Wyatt Family [Luke Harper, Braun Strowman & Erick Rowan] d. Cesaro, Dean Ambrose, Cesaro and Ryback by pinfall via a clothesline from Harper to Cesaro. Bray interfered, allowing Harper to get the win.