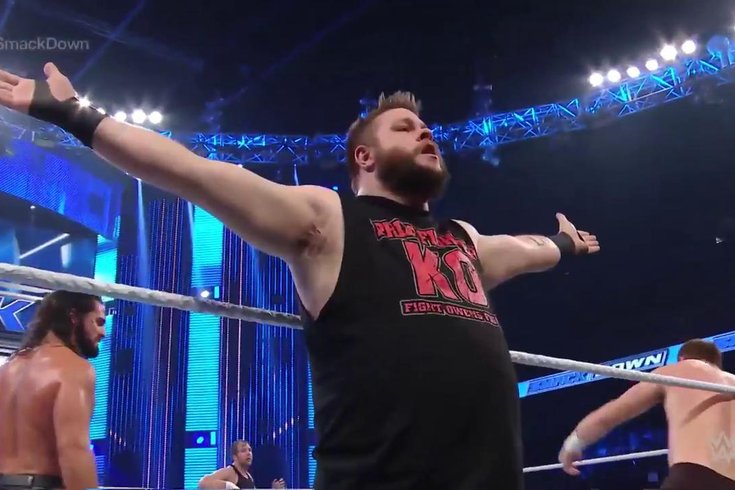 Thursday night’s edition of SmackDown was a milestone one for WWE, as it would be the last SmackDown to be taped on Tuesday and aired on Thursday. Beginning next Tuesday, SmackDown will air live from 8:00 p.m. to 10:00 p.m. on the USA Network.

The Van Andel Arena in Grand Rapids, Mich. was the host for this historic edition of SmackDown as we saw an advertised main event not happen as it turned into a tag team main event. Ah, SmackDown. That’s always what this program has been known for.

It also sounds like both Shane and Stephanie will name their general managers on Raw Monday night.

Rollins and Owens reign over Ambrose and Zayn

The advertised main event match all night was a non-title affair between Dean Ambrose and Kevin Owens. That never happened. Seth Rollins came out for commentary but attacked Ambrose before the match could even begin.

This brought out Sami Zayn who then attacked Owens and evened up the sides. Of course, that would lead to a tag team match. In a way, I’m glad these talents closed out the last edition of SmackDown on Thursdays. It was an entertaining match.

Zayn missed a Helluva Kick on Rollins, leading to The Architect hitting him with the Pedigree and getting the win. After the match, both Rollins and Owens continued their attack on Zayn, but the WWE Champion came in and chased them away.

Will these guys all be on the same show come next Tuesday? Or will they be split up between Raw and SmackDown? Stay tuned.

Enzo and Cass continue having their issues with The Club

Enzo Amore and Big Cass took on AJ Styles and Karl Anderson in a great tag team match Thursday night. With Luke Gallows on the outside, it seemed like only a matter of time before he’d get involved, and that’s exactly what happened.

With Amore heading to Big Cass for the tag, Gallows ran towards their corner and grabbed Cass’s leg down, preventing the tag. This would lead to Anderson also attacking Big Cass on the outside, and Styles was able to lock in the Calf Crusher on Amore, who had to tap out.

The No. 1 contender for Miz’s Intercontinental Championship, Darren Young, along with his life coach, Bob Backlund, attended the latest edition of Miz TV as guests. Miz actually showed a pretty awesome montage of Backlund’s career, and wanted to do the same with Young. However, Young’s montage was simply unavailable.

Young and Miz will face off at Battleground next Sunday. Miz opted not to get physical and left the ring after Young got in his face.

Will Sasha Banks finally get shot at the Women’s Championship?

Charlotte sort of made this match on Raw for whatever reason, but it was no sweat for Sasha Banks to take care of Dana Brooke, again, in a short match to kick off SmackDown. She made Brooke tap out to the Bank Statement.

Later, a tag team match was made official for Battleground with Charlotte and Brooke going against Banks and a mystery partner.

It looks like we’ll see Charlotte and Banks for the Women’s Championship at SummerSlam.

·  Non-Title: Dolph Ziggler d. Rusev (c-US) by pinfall after he rolled him up when Zack Ryder distracted Rusev.

·  Non-Title: Dean Ambrose (c-WWE) vs. Kevin Owens never began as Seth Rollins came out to do commentary but then attacked Ambrose. This led to Sami Zayn coming out and a tag team main event.

·  Seth Rollins/Kevin Owens d. Dean Ambrose/Sami Zayn by pinfall after Rollins hit the Pedigree on Zayn for the win.