WWE SmackDown rundown: The New Day has some resolutions for the new year 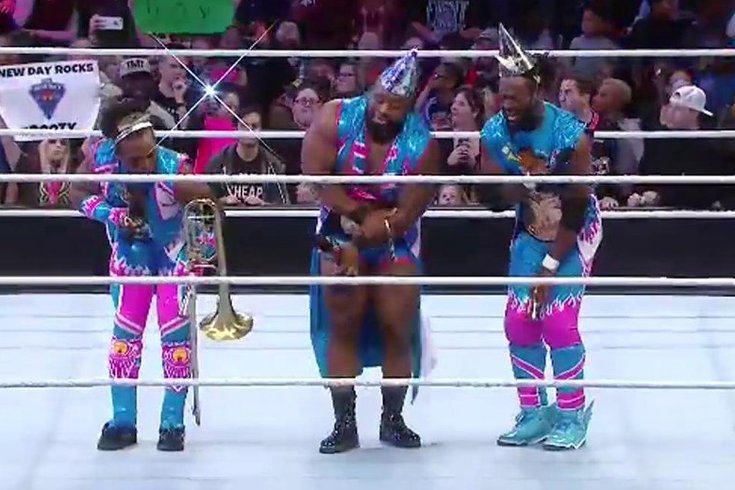 WWE ended 2015 with a bang as SmackDown emanated from the Verizon Center in Washington, D.C., on Thursday night. The main event would consist of the WWE World Heavyweight Champion and the WWE Intercontinental Champion teaming up, but the best part of the show may have been at the very beginning when the WWE World Tag Team Champions took to the mic.

The New Day’s New Year’s Eve resolutions for the WWE Universe were amazing, and we’re gonna list the three that they think wrestling fans should adopt as their own. I’m just saying – I probably have already adopted them.

Thursday night also marked the final time SmackDown will be broadcast on SyFy, as the program moves to its new home, the USA Network, beginning January 7th. This will make USA Network the exclusive home to the main two flagship programs of WWE.

Will SmackDown become a little more exciting? Will it mean more in terms of storyline development, character build and great matches? We can only hope. In fact, WWE advertised Thursday night that John Cena will be making an appearance on the next episode. So they’re already bringing out the big names.

The WWE World Tag Team Champions opened the program, complete with party hats and noisemakers to count down to the new year. Big E says New Year’s Eve is a time for reflection, celebration and resolution, adding that their resolution for 2016 is, “NOBODY!” Xavier Woods had to add in that they would have said, “NOTHING!” but saying, “NOBODY!” is kind of their thing. It’s the little added elements like this that round out a character or characters perfectly. We need to see more dynamic characters on the WWE roster in 2016.

1. “Each and every single member of the WWE Universe is going to be required to wear glasses and hearing aids. Kids, too.”

2. “The entire WWE Universe will be required to keep a New Day journal. Simply because, we give you a smorgasbord of greatness each and every night, and in order to not forget anything, we’re gonna need you to write it down.” Kingston adds this is possible assuming that the WWE Universe knows how to write.

Unfortunately for everyone involved, the Lucha Dragons interrupted the promo. Kalisto did most of the talking, saying that the Slammys are for the people. Clearly, the champions are still upset they weren’t voted as WWE Tag Team of the Year. The Dragons challenged the champions to a match, but since Sin Cara will be out of action for a while with a dislocated shoulder suffered Monday night on Raw, the Dudley Boyz teamed with Kalisto in the night’s first match.

After a really good opening match that saw Kalisto pick up the win for his team via a Salida del Sol on Kingston, the Dudleyz weren’t exactly finished. Bubba Ray and D-Von, with the help of Kalisto, wound up putting Woods through their special Happy New Year table with a powerbomb off the middle rope.

Ouch. I have a feeling that won’t be the last we see of the Dudley Boyz and New Day interact after their lackluster feud this past fall. Royal Rumble? Will Sin Cara be healthy soon enough?

Roman Reigns and Dean Ambrose teamed up again to take on Sheamus and Kevin Owens in a pretty good main event. Hopefully that’s the end of these tag team matches that headline SmackDown seemingly every week now as the program is moving to the USA Network.

This match, though, would not end cleanly.

Things get a little too out of hand as the referee calls for the bell in this huge tag team main event! #SmackDown pic.twitter.com/tW15OOP1kD

After Owens caused the disqualification, all four superstars began brawling, and Owens tried powerbombing Ambrose through the announce table. He was unsuccessful, however, as Reigns was able to hit him with the Superman punch and lay out Sheamus with a spear.

The champion defends his title on Raw against Sheamus Monday night.

No future for Tyler Breeze and Summer Rae?

So, Tyler Breeze has been on the main roster for just over two months, and hasn’t done much. He was immediately put with Summer Rae, and the two had potential together. Nothing good ever really came from it, so after Breeze defeated Goldust, the two made a “huge” announcement.

So long to @RealSummerWWE and @MmmGorgeous together... But thank you for one last selfie! #SmackDown pic.twitter.com/R59y4S0tc6

At least they took one final selfie together, right?

I like this move for Breeze, but I’m worried it might be a little too late. Breeze didn’t need Rae by his side, but the pairing wasn’t the worst thing for him. But, he’s lost time after time and has only one big win over Dolph Ziggler to his credit. He needs to be pushed way more than he has been. Maybe not being with Rae on screen anymore will be that catalyst he needs.

And this could also bode well for Rae, too. A lot of people forget she can wrestle, and she’s not bad inside the ring, either. Could she find herself back in the Divas division vying for the Divas Championship?

I was looking forward to seeing Bo Dallas approach more wrestlers backstage after he confronted Curtis Axel on Thursday night. Unfortunately, we didn’t get that. But it doesn’t make Dallas any less awesome.

• Tyler Breeze d. Goldust by pinfall via cheating with his feet on the ropes after driving Goldust face-first into the middle turnbuckle. So much for finishers, eh?

• Wyatt Family [Braun Strowman and Luke Harper] d. The Usos by submission after Strowman made Jimmy Uso pass out with his bearhug.

• Brie Bella and Alicia Fox d. Naomi and Tamina by pinfall after Brie hit Naomi with the Bella Buster.

• Dolph Ziggler d. Bo Dallas by pinfall via a superkick.

• Roman Reigns and Dean Ambrose d. Sheamus and Kevin Owens by disqualification after Owens interfered and low-blowed Reigns on the ring post when Sheamus was the legal man.