WWE SmackDown rundown: Reigns, Wyatt look to end each other at Hell in a Cell 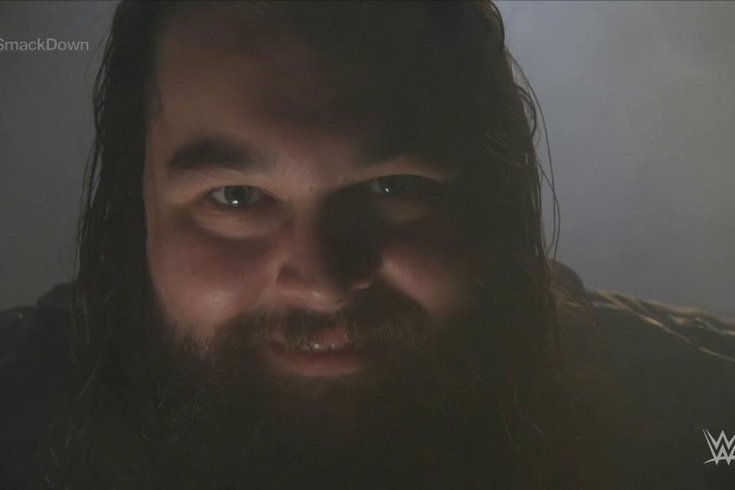 Bray Wyatt’s message to Roman Reigns: “See you in hell.”

The final stop on the highway to Hell in a Cell on Sunday night was in Austin, TX for SmackDown on Thursday night. The Frank Erwin Center was home to the last WWE show before Sunday’s pay-per-view, and Corporate Kane was back in charge after being suspended on Monday night. Kane didn’t waste any time throwing his corporate weight around.

For my Hell in a Cell preview, click here.

Stardust and The Ascension were in the crowd cheering on Cesaro. Why? Stay tuned.

This was probably the best match of the night simply because of who was involved. Cesaro looked good against Rollins, which will hopefully bode well for his future in the company. Rollins would win cleanly with a Pedigree, which makes two good wins for Rollins heading into Hell in a Cell. Generally, that wouldn’t bode well for him, but I really can’t see him losing the championship to Kane on Sunday.

In the opening segment of the show, Corporate Kane booked the WWE Tag Team Champions, The New Day, in a match against Dean Ambrose and Roman Reigns, much to the champs’ chagrin. Was there really any way they were going to let Ambrose and Reigns take a loss heading into Sunday?

A missing unicorn is no match for the #PowerOfPositivity! #NewDay #SmackDown pic.twitter.com/32Q9HltSSC

Even though the champions have titles to defend against the Dudley Boyz, I didn’t doubt Reigns and Ambrose wouldn’t lose for a minute.

Tyler Breeze made his main roster debut during a Miz TV segment by attacking Dolph Ziggler. Not such a bad way to make an impact for his debut, and aligning with Summer Rae could be very good for Breeze or very bad. He’s proven he’s dynamite as a singles character in NXT, so I’m just hoping they don’t ruin him. He’s still got the selfie stick during his entrance, which means so far so good.

And I love that he and Rae posed for a selfie after laying waste to Ziggler. Good stuff.

Paige addressed the elephant in the room in regards to people claiming her to be the one that attacked Natalya last Thursday on SmackDown. Why she couldn’t do this on Raw on Monday night remains a mystery. Paige said she wasn’t the one who attacked Natalya, but both Becky and Charlotte refused to believe her. Team Bella interrupted the festivities and Nikki declared she was going to win back the Divas Championship on Sunday.

Paige defended the honor of her “teammates” and said she would take on Nikki, and so they tangled one-on-one. Nobody has any clue as to Paige’s prerogative, and that’s probably what the angle is, but I think it sucks. Having Paige turn full-blown heel to have nobody know what the hell her motives are is lazy writing and an even worse creative decision. She should be facing Charlotte for the Divas title on Sunday night, not Nikki.

I miss Kevin Owens on the mic. What happened to him? Even as Intercontinental Champion, Owens hasn’t really done much or even said much. Thursday night, Owens was interviewed backstage after Ryback destroyed Bo Dallas and basically said even though Ryback is an impressive athlete, he’s just better. Swoon.

BO-lieve that #TheBigGuy is HUNGRIER THAN EVER for the #ICTitle at #HIAC! #SmackDown pic.twitter.com/InyiVNEGJO

Young said arrogance can be a dangerous tool, which seemed to delight Owens a bit. I guess that’s what he was going for.

• Nikki Bella d. Paige by pinfall via the Rack Attack.

• Sheamus and King Barrett d. Lucha Dragons by pinfall via a Sheamus Brogue Kick to Kalisto.