WWE Hell in a Cell preview: The final battle in hell for Lesnar and Undertaker 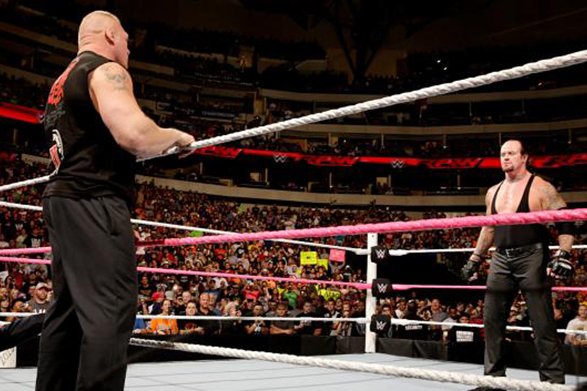 Brock Lesnar and The Undertaker almost came face-to-face on Monday Night Raw, but will save the fight for Sunday night.

Los Angeles missed out on SummerSlam this year, and it will miss out on SummerSlam next year. The next best thing? Sunday’s Hell in a Cell pay-per-view that will feature what’s being labeled as the final battle between the “Beast Incarnate” Brock Lesnar and The Undertaker inside the Hell in a Cell at the Staples Center. I’m eagerly anticipating the match because I think the spectacle will be better than their last Hell in a Cell match, and with the feud drawing to a close, a big angle should take place to move both men along to their next storyline.

Seth Rollins will also defend the WWE World Heavyweight Championship against Demon Kane, who inexplicably didn’t appear on the go-home Raw show because he was suspended in the storyline. Why wouldn’t he attack Rollins in the main event? The slow build to this match has been good overall, but nobody wants to see Kane in the main event in 2015 and nobody wants to see good storytelling missing an important part of the plot. This is what the Rollins/Kane feud is.

There’s a lot more action planned for the show, so let’s get to my preview with predictions:

Well, I guess Monday Night Raw wasn’t the place for these six men to settle the score – whatever score that may be – so they’ll battle once again on the Hell in a Cell preshow Sunday night. Does anyone really care who wins this match? I didn’t think so.

Prediction: Double disqualification because I have a feeling we’re going to see a third match in this series the next night on Raw.

This has to be the final match in this feud. When it began, Reigns was reeling a bit because the fans had completely turned on him. He’s nicely rebuilt himself up to being a fan favorite again, and this could be the beginning of another push towards the WWE World Heavyweight Championship.

But what does this mean for Wyatt? Where does he go next? He’s reformed the Wyatt Family with Braun Strowman and now a returning Erick Rowan, with Luke Harper also inexplicably being replaced without mention. A lot of inexplicable things going on in WWE today. Wyatt needs a strong opponent to go over to further cement his status as a star in the company, but I don’t see Reigns being that opponent.

We’re hoping for a repeat of Night of Champions, right? Because nothing has changed since then and Nikki Bella holding the Divas Championship just means bad things. The Divas Revolution hasn’t started out great, but the good thing is with talent like Charlotte, Sasha Banks, Becky Lynch and possibly more coming, the division will be well-nourished with talent. The Bellas are fine and don’t need to go away, and neither do Alicia Fox or Naomi. What needs to happen is simply better matches with stories that the audience can get invested in and give the Divas some character development. It’s been since June for this “revolution” and we have no character development. This is key. Let’s hope Charlotte retains and we finally start to see some emotional investment into these women wrestlers so the audience can actually get behind them.

Here’s another feud that has lacked substance. Why do these guys not like each other? Did something happen to really hammer home the grudge these two have with one another? Not really. Ryback just wants his title back, and Owens is going to keep it. Sometimes, that’s good. I just lack emotional investment in either guy right now. Ryback is a hokey good guy, and Owens still has promise, but I just have that sinking feeling inside that WWE will screw him up somehow. Am I preventatively not getting my hopes up for Owens for fear of being let down in the near future?

But, at least Owens has a midcard title. One that I think he’ll have for a while.

Prediction: Kevin Owens retains his championship after a low blow and pop-up powerbomb.

I’m torn on this one. I love The New Day, but the Dudley Boyz have to eventually win the Tag Team titles back, right? I mean, they should eventually as it would instantly raise the credibility of the titles, but The New Day is making it really hard for me to be okay with that.

The trio is money even without the Tag Team titles, so it makes me think this might be the Dudleys’ night. The New Day could also win the titles back in the future – maybe even from the Dudleys – so it wouldn’t be the worst thing in the world for the champions to lose the titles here. I’m going to go out on a limb now and say the Dudleys become 10-time WWE Tag Team champions Sunday night. And I’ll be okay with that.

Prediction: Dudleys hit the 3D on Xavier Woods and pin the wrong guy, but the ref doesn’t notice.

Not sure who Cena’s mystery opponent will be, but there’s been rumors swirling that NXT’s Tyler Breeze has been called up to the main roster, and might take away Cena’s United States title before he takes some time away from WWE to work on another project.

Honestly, I wouldn’t mind that. Breeze is a great character and should be a good fit on the main roster, especially if he has a midcard title right away. I don’t see a way Cena retains when he’s supposed to take time away after this event, but I guess he would always lose the title on Monday Night Raw the next night. I feel like we’ll see something big, though, and Cena loses the title on Sunday night.

This feud has actually been built very well and the story arc makes complete sense. What I still don’t know is why Kane wasn’t on the go-home show of Raw. Are they saving him for SmackDown? I’m not sure, but I doubt it. Kane’s revenge on Rollins has been almost a weekly occurrence now, so I think Rollins retains the title here.

Prediction: Seth Rollins retains his championship with a Pedigree.

Brock Lesnar vs. The Undertaker

This is the big one. Despite it being 13 years after the two last met in a Hell in a Cell match, I’m looking forward just as much today to this match as I did 13 years ago in their first Hell in a Cell encounter. WWE doesn’t want us to remember that because of how long ago it happened.

The Undertaker has reportedly agreed to work more dates with WWE through the end of this year, and maybe even through WrestleMania 32 in Dallas. Brock Lesnar re-signed with the company before this past year’s WrestleMania, so he isn’t going anywhere. If I had to choose an ultimate winner of the feud, I’d have to go with Lesnar simply because he could find himself in the title picture again should WWE change their minds about Rollins and Reigns. I don’t see how giving The Undertaker another title reign does anything for anybody. If he were to defeat Lesnar on Sunday and then vie for the WWE World Heavyweight Championship, I think a fitting end would be to lose the title at WrestleMania to someone like Reigns.

That’s my fantasy booking, though, and I doubt any of that happens. What needs to happen is a decisive winner in this match, and I’m going with the Beast.

The only gripe I have about this event is that it’ll feature a pink middle rope while two feuds likely climax inside a steel cage structure that has borne hatred between four men. The pink rope really takes away from the entire television presentation. One show? Fine. Pink ramp? Go for it. I was in Philly earlier this month for SmackDown, and the ropes really didn’t have an effect on anything to me, but on television, it really interferes and makes it difficult to watch.

It looks to be a solid show on paper and there’s a lot of good things that can come out of it if the creative team has an MVP-like night. The one thing I’m worried about is two of the biggest feuds in the company won’t be blown off Sunday night. If that happens, then we’re likely to see the respective blowoffs at Survivor Series next month.

I’ll be back Monday morning with my Hell in a Cell review. Enjoy the show!