Yes, that's me in the flat-earth documentary 'Behind the Curve' on Netflix 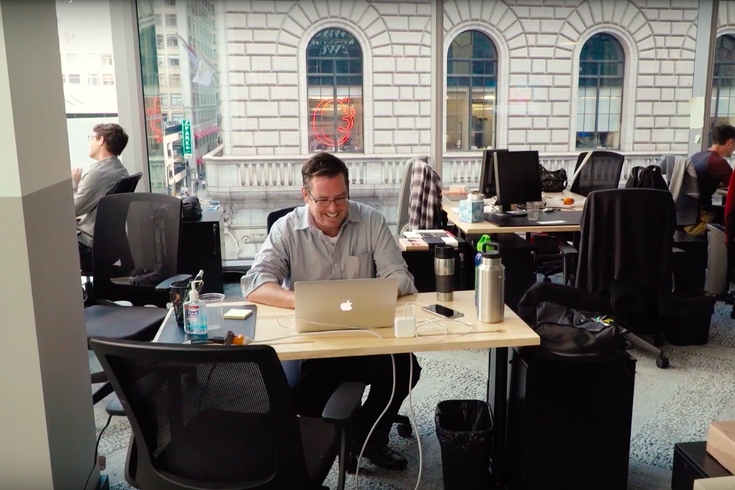 Courtesy/Daniel J. Clark's Behind the Curve

A screenshot of PhillyVoice's newsroom in the 2018 flat-earth documentary, Behind the Curve.

I’m not going to sit here and pretend that I haven’t written a fair amount of stories about the whole flat-earth “controversy” for this site over the years. (Eight within a 10-month span, if you want to get technical.)

So, I can’t blame those who believe the earth is flat for considering me an ally. That’s what tends to happen when someone actually takes time to listen to an argument that many find ludicrous on its face.

Such coverage tends, too, to draw the attention of documentary filmmakers working on a story about that conspiracy theory.

All of which is to explain how the folks behind “Behind the Curve” stopped by the PhillyVoice offices in 2017 to interview me about the flat-earth conundrum.

During that hour-long-or-so interview they told me some of the folks who believe the earth isn’t round had come to consider me as more than an ally, but a member of their brain trust.

Fast forward to the past or so, and countless people have been messaging and texting me images of myself on screen since the documentary – which premiered at the Hot Docs Canadian International Film Festival in Toronto last April and May – made its Netflix premiere on February 15.

All the while, it's been selected for more than 20 film festivals all over the world. (I gave it a watch on Sunday night. It's riveting, entertaining and well worth checking it out.)

As issues are wont to be in the flat-earth realm, the doc’s popularity has reignited a feud between flat-and round-earthers. Roundies say the flatties proved the world isn’t what they say it is. Flatties say roundies have been exposed as fraudulent and frightened. (That's a substantial oversimplification.)

Me? Though I spoke to the film crew about how the stories came to be and why I chose to lend flat-earthers a platform – it all came down originally to a billboard on I-676 and a philosophy that interesting people and subjects should be written about – it was whittled down to about 30 seconds of screen time.

On screen in the 95-minute documentary is an Ask Hickey post in which I took a reader’s question – “Did you talk to the flat-earthers about the upcoming eclipse?” - to flat earthers.

One of them then maintains that what the world doesn’t know is that the writer (me) is a flat-earther. To which I respond:

No, I’m not a secret flat-earther.

I believe the world is round, the Sixers have a legitimate shot at the title this year (provided Joel Embiid figures out how to come up clutch when the shot clock's off), and it was a remarkably wise decision to buy Phillies tickets in right-centerfield before the Bryce Harper signing.

What I am, is happy to have provided a forum for flat-earthers to be heard, though. If they’re right, maybe I’ll get a free pass into flat heaven when my time on round earth is done.

Oh yeah, if anybody out there is working on a doc about chemtrails, hit me up. I have a wealth of knowledge to share.