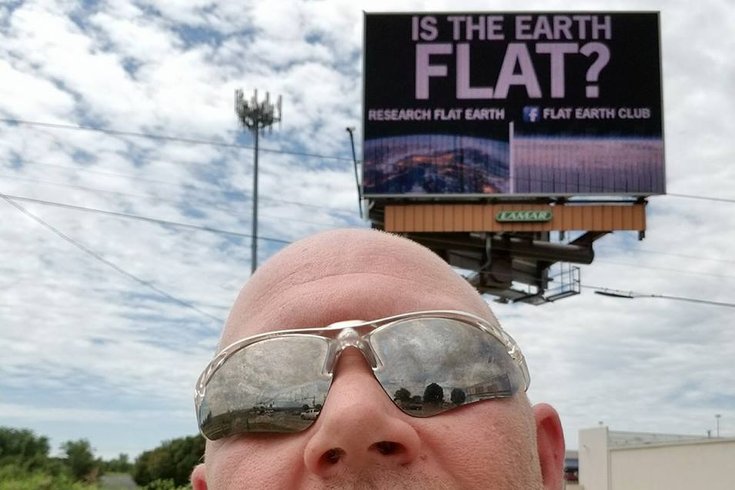 Weeks after the flat-earth movement posted its first-ever billboard in Philadelphia, another one has popped up in Tulsa, Oklahoma.

The other night – well, make that the other “early morning” – I received a startling phone call.

It arrived at exactly 4:47 a.m. local time. I did not hear the phone ring, but the caller left a voicemail in which he identified himself by the name Louis Hackett.

He said he had discovered some troubling information and was looking out for my best interests. His voicemail went a little something like this:

“You probably don’t need to be told this, but people on the YouTube channel ‘Infinite Plane Society’ are planning on, for lack of a better word, harassing you about the flat earth and their beliefs.

“They’re waging a media campaign, but I thought they’d be a little trickier about getting themselves attention.

“I think they’re just going to be calling you obnoxiously and I wanted you to know about it on the off-chance that they try to play psychological tricks on you and catch you off-guard which is a possibility.

“Sorry for calling you so late but these guys don’t sleep. Maybe this voicemail will save you some time and confusion in the future.”

Yes, this was troubling, and I appreciate Louis’ decision to notify me of potential craziness careening my way.

In fact, I appreciated it to the point of reaching out to Tim Ozman, the subject of a recent story I’d written on the flat-earth movement that made its way to a Philadelphia billboard earlier this month.

He apologized for the call and assured me that no psychological war had been declared on me, as far as he knew. He noted that “there’s a lot of people trying to undermine Flat Earth research and I’ve been getting lots of flak for doing the billboard.”

“By the way,” he added, “there’s another billboard in Tulsa organized by a Facebook Flat Earth Group. I do know that one of them was going to contact you.”

And contact me one of them did on Monday after my whisper-down-the-lane inquiry made its way to the closed Facebook group. Sure enough, another “Flat Earth” billboard HAS gone up in Tulsa, Oklahoma.

It is more extensive than the one that was off I-76 in Grays Ferry.

“Is the Earth flat? Research Flat Earth,” it asks in all-caps presentation, with a note shouting out the Facebook group responsible for it.

On Monday afternoon, a gentleman named Todd Monachello reached out via email on behalf of Marisa Keeland, who funded the $1,500 effort to post that billboard not too far from Tulsa International Airport for a month.

“The flat earth is no joke. People all across the world are waking up to the deception behind Satan's spinning ball,” he wrote. "Marisa funded the Tulsa billboard herself. She, like myself and millions of others, are dedicated to spreading this truth.

“This is just the second of many more to come in the future. Look for one in Denver and Phoenix soon!”

You can see it for yourself in these videos:

In any event, I haven't gotten any more calls so please, flat-earth people, lay off. I have a family and I don't always remember to turn my ringer off.