Your WWE Raw roundup: Third time’s the charm for The Authority 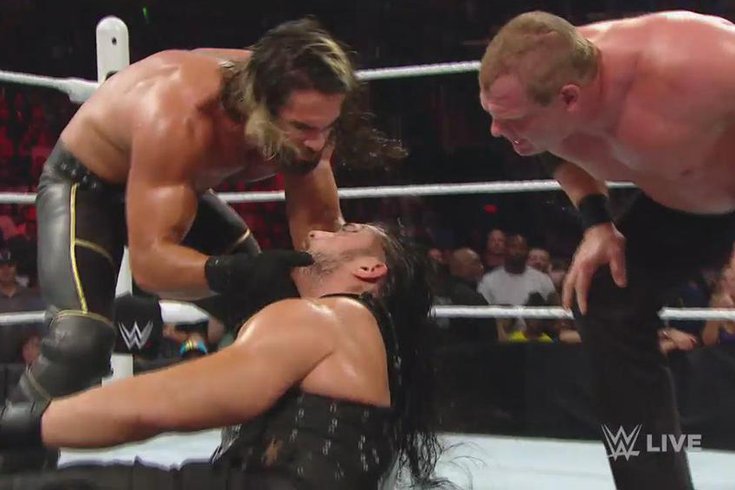 Seth Rollins and The Authority destroyed their third fan favorite in the span of one week.

The Nation’s capital was the site of Raw on Monday night, as the Verizon Center in the Washington, D.C. was just another stop on the road to Battleground in July. Fresh off destroying Brock Lesnar and Dean Ambrose last week, Seth Rollins and The Authority were in a great mood Monday night. Rollins even got his boys gifts. Pretty awesome gifts, actually.

We witnessed an absolute classic match involving – wait for it – John Cena. Bray Wyatt finally looked like the legitimate monster from two years ago, and even the Divas brought their A game to the ring Monday night. With Battleground three weeks away, it’s looking more and more like a stacked card as the days go by. This might be one of WWE’s best July events in company history, except maybe for Invasion back in 2001.

Here are the main stories coming out of Raw on Monday night:

The WWE World Heavyweight Champion, Seth Rollins, absolutely owned the opening segment of Raw. It’s been a while since we’ve seen a segment like that in professional wrestling, so having Rollins buy his boys from The Authority lavish gifts was highly entertaining, especially when Kane and J & J Security would react to it. The gifts included: Apple watches for all three, a trip to Hawaii for Kane, a brand new 2015 Cadillac CTS.

In the world of professional wrestling, one thing was for certain after the opening segment – that car was going to get destroyed. Some way, somehow, that car would not leave the arena in one piece.

Except it did. WWE’s booking Monday night wasn’t as predictable, which made for a more exciting show. Rollins and Kane, with help from Bray Wyatt, completely decimated Roman Reigns after the main event. That’s three top babyfaces on the last three WWE television shows that have been completely destroyed by a reunited Authority. No Triple H or Stephanie on Raw, either. This was Rollins’ chance to shine in being the true leader of the group, and he once again was made to look strong.

Look, I don’t think J & J Security or Kane are worthy of getting consistently top quality television time, but the last week, they’ve really made it work to their advantage. They feel like a poor man’s Shield stable with how all four of them have banded together to take out the enemy. And even though the fans are supposed to hate them, I actually think it’s perfect to build Rollins into a legitimate threat to Lesnar at Battleground. Sure, 4-on-1 isn’t exactly making Rollins look as legitimate as he would on his own, but Lesnar is a completely different monster. Rollins needs every advantage he can get.

And the way the show went off the air, with Wyatt in the ring kneeling over Reigns’ limp body, was absolutely stellar. It’s been a while since we’ve seen Wyatt featured so prominently, and in a position to close the show with a ton of heat. Given the No Disqualification nature of the main event, Wyatt made his presence known and weakened Reigns before returning after the match and hitting him with Sister Abigail. I like where this feud is headed. Last week, I wasn’t so sure. But now I’m all in.

Lesnar wasn’t on television this week, but he’ll be in Japan for Saturday’s supershow in Tokyo. That show will air live on the WWE Network on Saturday morning, beginning at 5:30 a.m. We’ll have a complete review of that show right here on Saturday morning.

With every fiber of my being, I’m hoping WWE has set Cesaro back on track to become a big player in the company from here on out without his tag team partner for the next year.

The NXT Champion, Kevin Owens, came out to the ring and looked to be John Cena’s opponent in his United States Championship Open Challenge, and then he did what almost everyone watching expected him to do. He left the ring before the bell could ring and introduced Cesaro in the perfect bait and switch for the audience, and especially Michael Cole. Seriously, I thought Cole was going to pop a blood vessel with how excited he sounded when Owens made his way to the ring.

And for Owens, what a move it was. Cena and Cesaro had quite possibly one of the greatest Raw matches I’ve ever seen, and that’s not be overvaluing what I saw on television. Tons of near falls, great maneuvers, and excellent storytelling at the end of the match made this one of the best segments in Raw history. I honestly don’t think I’m playing that up.

Despite Cesaro and Owens fighting against each other on SmackDown just over one week ago, Owens looked to be rooting for Cesaro during the match. At one point, Owens got up and swatted at announcer Michael Cole and then sat back down in what seemed fairly odd. Cesaro was able to lock the Sharpshooter on Cena not once, but twice, and the second time Owens ran into the ring and attacked Cesaro, causing the disqualification.

"If anyone's going to beat @JohnCena for the #USTitle, it WILL be ME!" - @FightOwensFight #RAW pic.twitter.com/RH1PO9EuH5

Owens wants to be the one to win the United States Championship from Cena, and attacking Cesaro was his way of ensuring Cena would be champion come Battleground.

Cesaro also came out of the match looking like a million bucks, so if WWE can capitalize on the momentum he had on Monday night, they might be able to get his career back on track. Let’s face it – without Tyson Kidd, Cesaro needs a monster push. Or else he’s just being wasted.

Speaking of Cena, he was nominated by ESPN for Sports Humanitarian of the Year. His reaction is above.

Dolph Ziggler and Lana decided to “go public” with their relationship, even though we’ve seen them practically make out every week for the last month and change. Rusev and Summer Rae intervened, which ultimately wound up in a catfight between Lana and Rae.

I could see a mixed tag team match in the future when Rusev is fully healthy. And I’m glad they have Rae doing something other than toiling away in the Divas division.

So, this week, the Bellas are heels. I can’t keep track anymore. I literally can’t. Just Thursday night on SmackDown, they were the babyfaces getting a big pop, and now they’re getting booed because of how they were booked on Raw.

And please, tell me Wyatt doesn’t have one of the best promos in the business, if not the best. The guy just nails it week after week. Here’s hoping he’ll get back on track with this Reigns feud and become a major player in WWE again.

• Big Show d. Mark Henry by pinfall via the Knockout Punch. Miz was on commentary during the match. Ryback came out after the match and fought with Show, and Miz got a shot in at Ryback. That led to the next match.

• Paige d. Alicia Fox by pinfall via a rollup.

• Sheamus d. Neville by pinfall via the Brogue Kick.

• No Disqualification Match: Seth Rollins (c) and Kane d. Dean Ambrose and Roman Reigns by pinfall after Rollins hit Ambrose with the Pedigree. Bray Wyatt interfered in the match and took out Reigns.