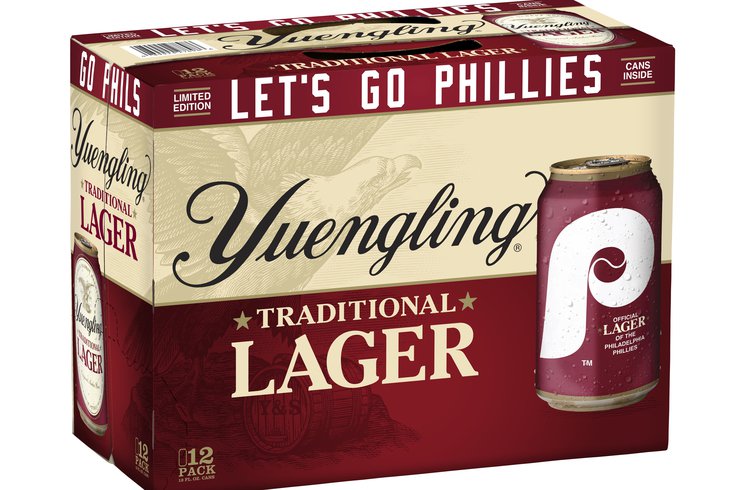 Yuengling, who recently partnered with the Philadelphia Phillies, is releasing limited edition cans of their traditional lager later this month that sport the Phillies' retro logo. Twelve packs of 12-ounce cans will be available in select markets and the 16-ounce will be available at Citizen's Bank Park.

As the new "Official Lager of the Philadelphia Phillies," Yuengling is taking its love for the team one step further. The brewery is plastering the team's retro logo to limited-edition cans of their traditional lager.

"As we kickoff our 2020 season, we are excited that our fans will once again be able to enjoy the iconic taste of America's Oldest Brewery, both at the ballpark or in their own home, all while cheering for their favorite baseball team," David Buck, Phillies executive vice president, said in a statement.

The Pottsville brewery, who has sponsored the team since 2017, announced a multi-year partnership with the organization on Tuesday. In 2019, pitcher Aaron Nola was named brand ambassador for the company — the first active professional baseball player to represent a beer brand.

"I'm excited to continue my partnership with Yuengling in an even bigger way, and I couldn't think of a better way to kick off the season than with these cool Lager cans," Nola said in a statement.

The brand plans to be more present than ever at Citizens Bank Park this season. Yuengling Party Pavilion, a new bar located beyond right field, will serve the brand's classic beers, including Lager, Light Lager, Black & Tan, Golden Pilsner, and Flight. There will also be giveaways and special promotions on Wednesday nights during the regular season — aptly renamed to "Yuengling Wednesday."