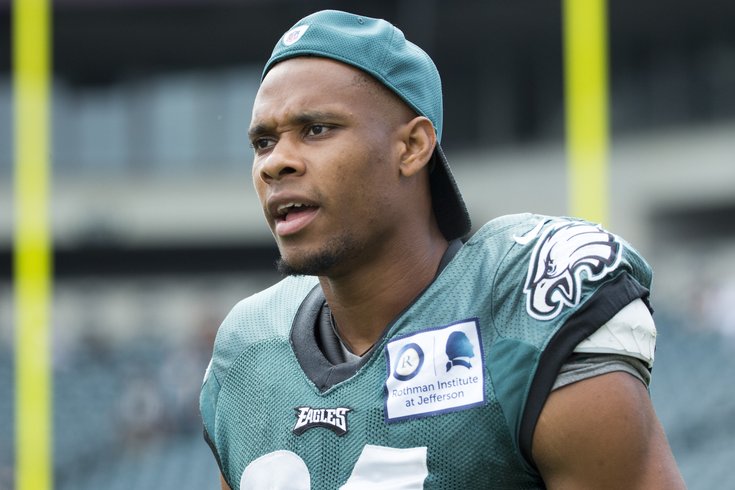 The injury to Matthews was definitely the scarier of the two, as he caught a screen pass from Sam Bradford and was immediately lit up by Mills, who came in low. After going to the ground holding his knee and traders rushing over, he was able to get up (with some help) and limp off the field and into the trainers room.

After practice, head coach Doug Pederson said that Matthews was having his left knee examined and the team would provide an update once they know more.

As for Mills, he said it wasn't intentional and is just one of dangers that come with going full speed in camp.

"But he's my teammate. He's one of the veteran guys, who has played the game long enough and helps me day in and day out. So as soon as it happened and I saw that he didn't get up, I told him, 'You know it wasn't intentional.' He shook his and said he knows; it's football. As soon as I finish talking to you guys, I'm going to check on him."

Considering that he nearly took out Bradford's No. 1 target before the first preseason game was even played, would Mills considering changing his style? That's not likely, especially since he's still trying to earn a spot on the 53-man roster.

"No. I'm not going to do anything different," Mills said. "I'm going to come the same, full speed. Just in practice, right now though, I may try to change it up a little bit because we do need every guy out here right now going into the preseason. But, for sure, I'm going to keep playing fast."

And after hearing Pederson's thoughts on the play, Mills is probably right.

"We're in a live situation, so I understand the competitiveness of the drill," Pederson said. "I've tried to get the message across to sometimes, just to protect each other, try not to go low if you can. It's reactionary stuff. And, you know, you can't fault the players for trying to make plays."

The message from the coaches to Mills after he took out Matthews?

"Just be smart," he said. "They love that I'm playing fast, but be smart."

Pederson reportedly doesn't believe Matthews' injury to be a serious one.

#Eagles HC Doug Pederson: Everything is fine with Jordan Matthews, just going to be sore for a couple days"

Prior to Matthews going down, both Zach Ertz  and  Marcus Smith left practice and are currently being evaluated for head injuries. At least in the case of Ertz, that's not the injury we expected Pederson to announce.

"Right now, with Zach -- him and Marcus [Smith] are both being evaluated for head injuries," the rookie head coach said after practice. "Right now, upper body. So I'll have more for you probably later today."

After he was hit in what appeared to be the left thigh area by Countess while going across the middle, Ertz didn't look quite right as he walked back to where the trainers and coaches were. He wasn't limping too noticeably, and almost looked like he was holding his side.

Perhaps the head injury happened on an earlier play and it wasn't until the hit by Countess that others noticed it. Perhaps not.

It just seems strange that he would suffer a head injury after taking a low hit.

"I probably would change some things," Countess said of the hit on Ertz. "You want to take care of your teammates. In the heat of the moment, being aggressive and the type of player I am, it just happened. It was definitely low, maybe a little too low, so that's something I'll look at, and I'm going to do the best to take care of my teammates."

So far, the news is good for Ertz.

Zach Ertz has been cleared. No concussion.

We'll have more as soon as the team provides an update.