10 interesting things I saw at the 'Guntoberfest' gun show

Some were funny, others scary. Just another day in a room full of weapons! 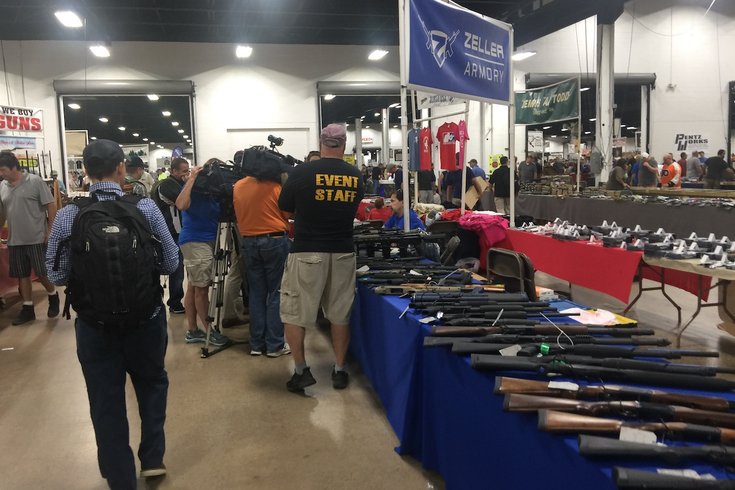 TV-news crews from several Philadelphia stations crowded around one vendor as they were escorted into the 'Guntoberfest' gun show in Oaks, Pa. on October 6, 2017.

The doors at the “Guntoberfest” gun show had been open for just 10 minutes and the line out the door was about 100 deep at the Greater Philadelphia Expo Center in Oaks.

Standing nearby, aside from gentlemen with weapons slung over their shoulders that would have to be unloaded at the gun check-in table, were a couple of television-news cameras.

That’s just the nature of trying to sell weaponry and accessories five days after the deadliest mass shooting in American history.

Patrons grumbled about the interlopers. Some said they were surprised there weren’t any protesters. Others made it clear that they were most certainly not interested in talking to the media.

But one lanky, white-haired fellow decided to engage. Turning away from a 6ABC reporter, he asked those gathered if they remembered the largest mass killing on U.S. soil prior to 9/11.

He implored anybody with a smart phone to take it out and look up the “Happy Land Discotheque” arson of 1990, but didn’t give them time to search.

Rather, he noted that the mass murderer responsible for 87 deaths did so with a product that “you can buy at any corner store.”

Sure, Happy Land was more of a social club, and sure, you can’t get gasoline at a corner market. Still, his point was clear: Why do people blame all gun owners for the murderous decisions of an evil few? Nobody here was responsible for the Las Vegas massacre, after all.

Their defenses were up, and I wasn't in the mood to antagonize on a Friday afternoon. Not with this crowd. Sorry, not sorry.

As I strolled the sprawling vendor area, pondering whether I should follow through on getting a gun of my own (more on that in a future column), I started compiling a list of the 10 most interesting things to see at the show.

There are only 10 because I chose not to include the Sarco Inc. table featuring more than a couple Nazi-themed products. Mercifully, I didn't see all that much of that kind of thing around the convention center.

10. Yes, pickles are disgusting but they – along with many varieties of Beef Jerky and survival rations – were available. 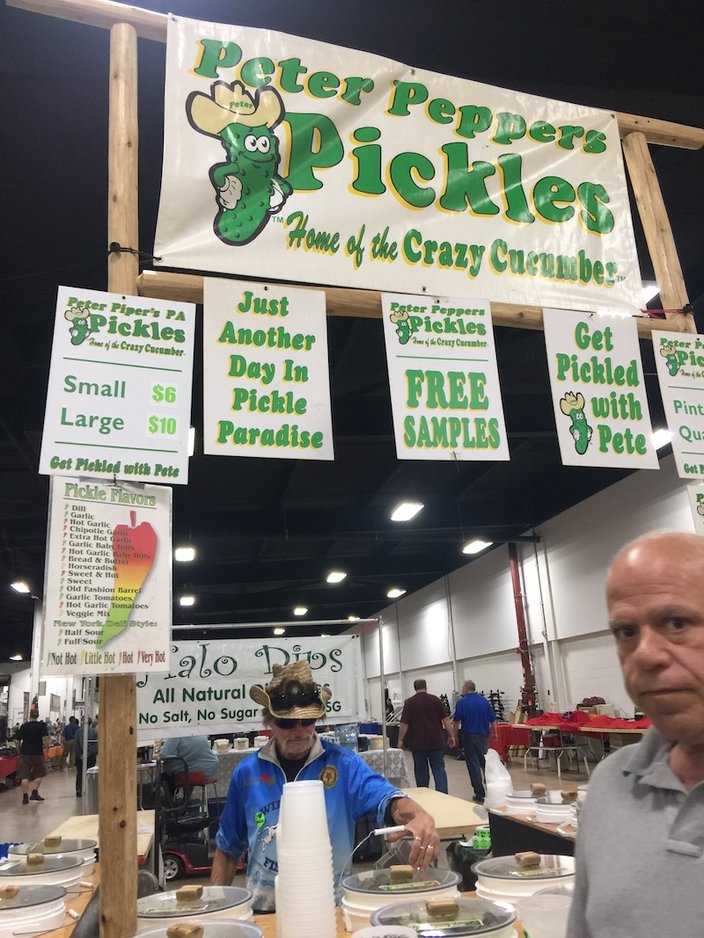 The aroma of pickles permeated the air inside one section of the Greater Philadelphia Expo Center on Day One of the three-day 'Guntoberfest' gun show.

9. Limited edition “Trump Knives” emblazoned with such pithy phrasing as “Fake News Network” playing off the CNN logo and “Hillary for Prison.” Nope. That's not over-the-top at all, is it?

8. The “Defend Freedom, Defeat Democrats” T-shirts located near all those shooting and stabbing products gave me pause. So, too, did the “Get Over It, Trump Won” T-shirt on the guy who never seemed to be more than 10 feet away from me. To each their own, though. I was on their turf, after all.

7. ZOMBIE BATS! Because you never know when an adversary THAT DOESN’T EXIST IN THE REAL WORLD” might present itself. 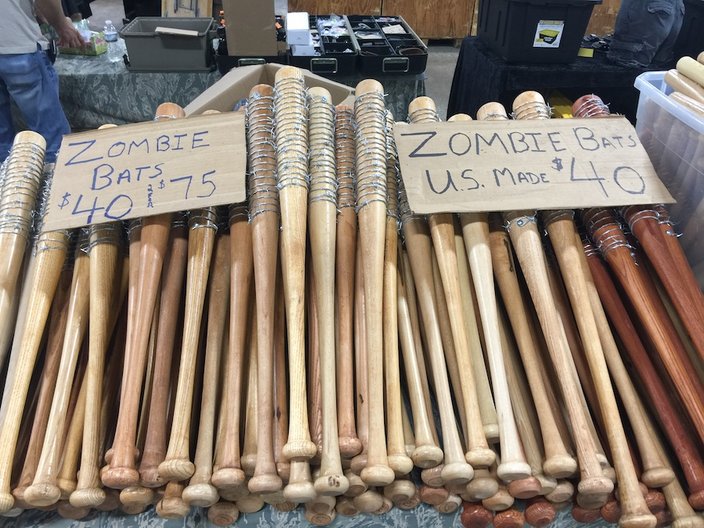 Zombie Bats, for those of us who need protection against creatures that do not exist in the real world.

6. One vendor had her pet Pomeranian standing on the display case of various guns. Aw.

5. This guy with the fully-loaded electric wheelchair cart. 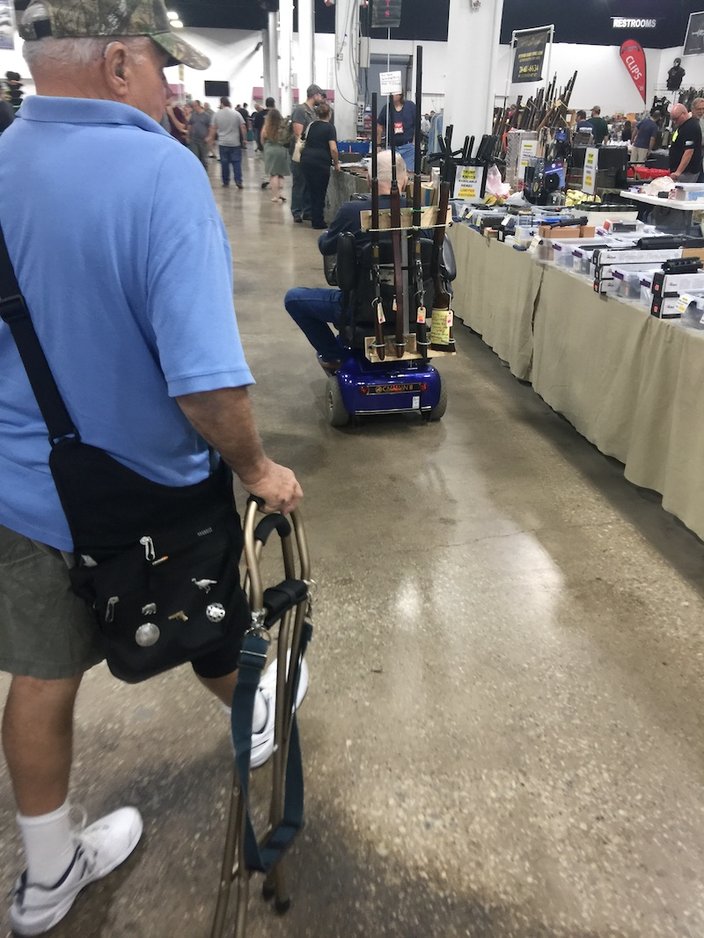 4. These shirts! (Full disclosure: The one on the right was a little less unsettling than the half-American, half-Confederate flag mash-up.) 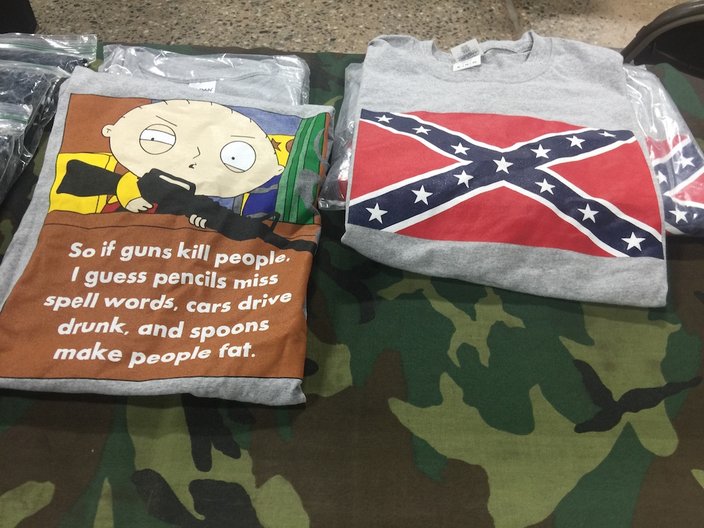 3. A father cradling his young daughter in one arm while playing with a Wolverine from X-Men "blade hand" with the other. (By the way, there were a LOT of children there.)

2. Yo, this Geartac K9 hands-free dog-walking device was so unexpectedly cool I got into an in-depth conversation about the pros and cons of invisible fences, as well as how they’re trying to build up a Pennsylvania-based, American-produced product that’ll change the lives of dog walkers everywhere. Invest while you can. This product's gonna take off.

1. Cameras from a few TV stations getting a security escort into the building to get the same quotes from the same vendor who, after they were gone, said he’d experienced the same media onslaught in the wake of the Sandy Hook elementary school massacre. Said one observer, “Joel’s escorting them. You gotta give them certain liberties, I guess!” (See photo at the top of this post.)