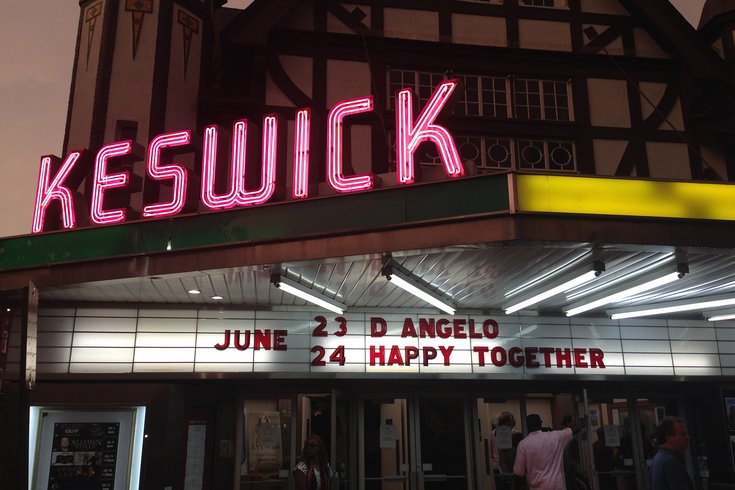 This photo shows the marquee at the Keswick Theatre in Glenside, Montgomery County.

D’Angelo gave a riveting performance last night at the majestic and intimate Keswick Theatre in Glenside, wowing the crowd for more than two hours with a true showman’s performance that covered the better part of the singer’s legendary catalog. It's great to see D'Angelo thriving, as his reclusiveness and turbulent past often raises questions about the singer’s state of well-being. If last night’s performance is any indication of the state of D’Angelo, rest assured -- because he is alive, well and killin' it.

Here are 10 reasons why D’Angelo's still got it going on:

D’Angelo certainly made us all wait for his most recent album, the politically charged 2014 standout The Black Messiah, and critics and fans alike seem to unanimously agree that the album was well worth the wait. The new material sounds amazing live and is already creating memorable moments during performances, such as when the bouncy piano riff to “Sugar Daddy” started off, and the crowd immediately erupted in recognition of the track, energetically bobbing to the snappy beat. There’s no way you can say D has fallen off with his new material sounding so fresh.

Hopping back and forth between guitar, piano, and solely the mic while meticulously conducting his 10-piece band effortlessly, D’Angelo was on point from the moment he stepped on stage a little after 9:15. Like some of his other Soulquarian colleagues such as Erykah Badu, D’Angelo has a reputation for being ‘on another planet’, that results in quirky somewhat inexplicable behavior, such as massively delayed start times to his performances. It was all business for D’Angelo last night, as the crooner passionately tore through a grueling performance, hitting every falsetto note and stop-on-a-dime break that he hurled his band into.

D’Angelo is a true performer, and a top-notch one at that. Every part of D’Angelo’s show is a performance, from directing the stage lighting crew to raise and lower the lights as he wanted, to coaxing the crowd into different clapping routines and dance moves, to conducting the band with razor-sharp instrumental breaks and tempo changes while dancing along effortlessly. Ending his first hour-long set with a rousing rendition “Sugar Daddy,” D’Angelo channeled James Brown as he authoritatively conducted teasing horn breakdowns before diving back into the track to ravenous applause.

D’Angelo is a true sex symbol and style icon – his every move and gesture on stage met with hoots and hollers from hoards of screaming females. Over the course of his two set plus encore performance, D’Angelo rocked a stylish sparkling guitar and donned several different looks, switching from a white to a blue fedora in between sets. Between his infamous naked performance in the video for his massive 2000 hit “Untitled (How Does It Feel)” and unflattering mugshots that surfaced five years later surrounding his DUI arrest, public scrutiny of D’Angelo’s appearance has always been high. While he doesn’t have the six-pack and ultra-cut body of his 2000 days, D looked fit and happy during his performance, certainly satisfactory for the swooning audience at the Keswick.

That voice! D’Angelo’s voice fluctuates between smooth and gritty with a soulfulness that puts him in the company of legendary golden-age soul singers like Marvin Gaye. He plays pretty much every instrument, but his voice in itself is most definitely an instrument that he leverages, bringing the crowd to a fever pitch through scatting breakdowns and soulful squeals.

Recording a lot of his songs with Questlove at the drum kit, D’Angelo knows what’s up when it comes to Philly’s music history and has a history with our city that extends back to the recording of his first album. Countless times he shouted out Philly, addressing us ‘the city of brotherly love and sisterly effection’. During his performance of “Brown Sugar,” he put a special emphasis on Philly when delivering the line “I met her in Philly and her name was Brown Sugar.” The love is mutual, D!

D’Angelo’s new album The Black Messiah definitely has its tender and sexy moments, but it’s also every bit a reaction to the spree of police killings that has played out recently. At the tail end of his first set, D brought the music to a stop as he held a fist in the air and listed off names of the deceased Eric Garner, Tamir Rice, and Freddie Gray before diving into an impassioned rendition of “Charade”, the album’s most overt political statement and call to action. With lyrics, “All we wanted was a chance to talk, ‘Stead we only got outlined in chalk'” D’Angelo is no longer satisfied with sitting idly by as atrocities occur around him. He even had a recent interview with Black Panther activist Bobby Seale.

Boasting legendary studio musician Pino Palladino on bass and ex-Time guitarist Jesse Johnson as part of his 10-piece crew, D’Angelo’s backing band The Vanguard are amazing musicians who help bring the many textures and layer’s to D’Angelo’s music alive. “Spanish Joint” was a memorable track from the show, as Johnson shredded intricate solos on an acoustic Spanish guitar.

The principle of supply and demand definitely applies to D’Angelo, as his sparse releases of new material create thirst amongst his rabid fan base. Of course he’s going to wait until the very end of his encore to perform “Untitled (How Does It Feel) – he wouldn’t give it up easy, now would he? Even during the performance of the song, he teased starting off with vocals, faking the crowd into thinking he was going to start the vocals to the song over four-minutes, even mouthing the lyrics to the crowd before finally delivering an amazing performance of the track.

D’Angelo is an artist in the truest sense of the word, a true out-of-this-world talent replete with frustrating quirks that leave his fans in multiyear dry spells, with a seemingly inexplicable degree of self-consciousness that causes his fan base, who actively root for his successes, to cheer him on. He’s on a level up there with some of the true legends in soul music, such as his musical idol Prince and the godfather of soul himself, James Brown. There really are very few people who have talent on the level of D’Angelo.

I’m so glad this show was at the Keswick Theatre – from acoustics to ambience, it’s an amazing place to take in a show and was definitely the perfect setting for this show. Thank you also to the courteous staff for even helping me track down the set list for the show. I’ll definitely file this one away as one of the best and most memorable shows I’ve even been to. 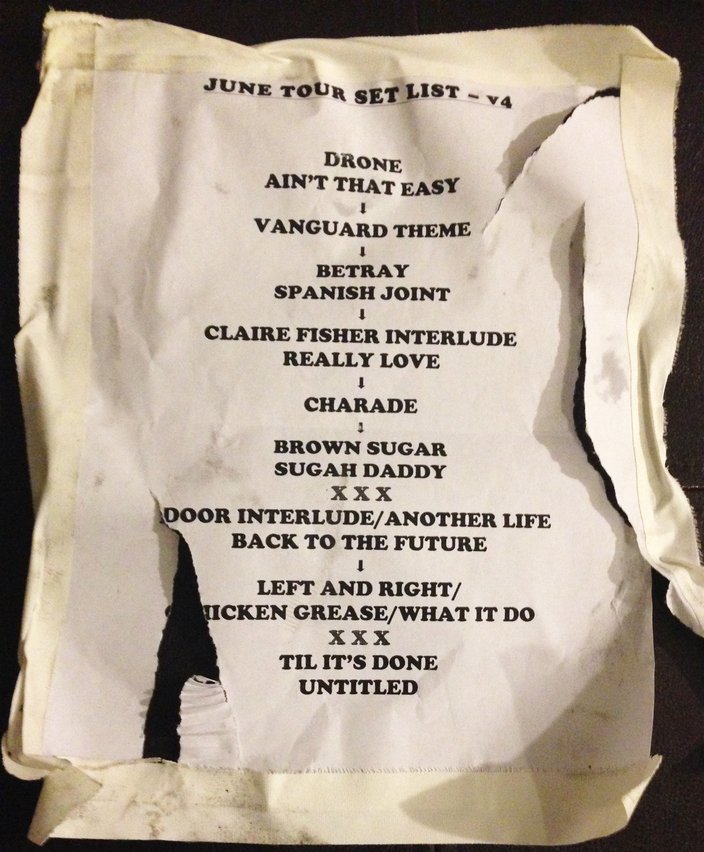 D'Angelo's setlist from his Keswick show. Photo by Chris Burrell.