From seafood to sweets, try all the best beach bites 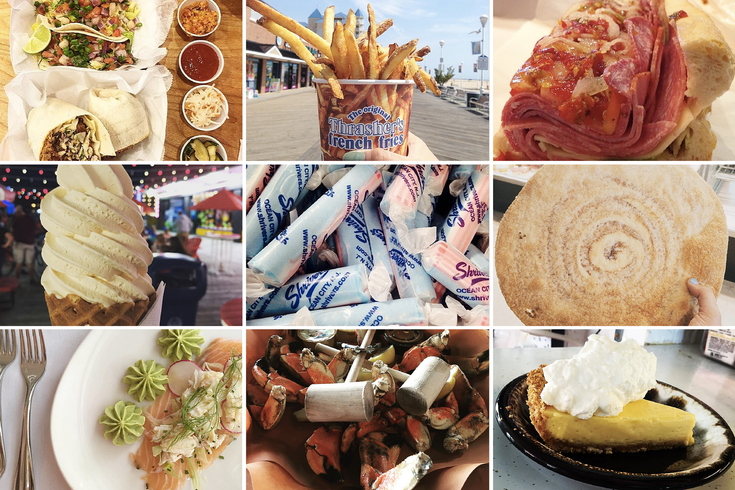 The Jersey Shore is wild about the sweets and savory eats at the beach.

Diving into the local food scene is an important part of any vacation. Partake of these 20 essential Jersey Shore eats and you will need to supersize your waistband when you get home.

1. Don't tell mama, but the meatballs at Martorano's, an Italian restaurant at Harrah's in Atlantic City, are so renowned they have been endorsed by Al Pacino. They could make you take sides against the family recipe.

2. Belly up to the counter at Johnson's Caramel Corn in Ocean City, which has served its particular form of junk food for some 75 years. Eat it while it's hot –– and then return for a discounted refill tub.

3. Dine at the circa-1840 Washington Inn in Cape May for an experience that's old-school without being outdated. You can't go wrong with the surf –– Sicilian-style grilled local swordfish–– or turf –– the domestic rack of lamb.

4. Take a walk on the (wild) side of boardwalk grub by chowing down on Korean-fusion tacos at Mogo in Asbury Park. If you want something more traditional, try the chicken wings, available in soy-ginger or “spicy” glazes.

6. For boardwalk fries done greasy right, pick up a bucket (or three) from Thrasher's, which has multiple locations in Ocean City, Md., and Rehoboth Beach, Del. The circa-1929 recipe has outlasted the Great Depression, World War II and McDonald's.

7. Grab a seat at the counter at the Holiday Snack Bar in Beach Haven and order a slice of pie –– blueberry, cherry, banana crème, oh my. The luncheonette has been dishing out homestyle treats since 1948.

8. Polish off a plate of homemade ricotta gnocchi in meat sauce at Ristorante Luciano in Stone Harbor. Your nonna (real or virtual) will be so happy!

10. If it's frozen custard, it's got to be Kohr Bros., which has 11 shore locations. Whether to choose a more adventurous combo like chocolate-mint, instead of the traditional chocolate-vanilla, is between you and your server.

11. Don't resist that pink building on Route 72 in Manahawkin on the way home from Long Beach Island and its sweet temptations within. Lucille's has been cranking out fudge since before the Great Depression. A mix-and-match box will make you forget about the traffic.

12. Order just about anything from the ever-changing menu at Louisa's in Cape May. This seafood-centric BYOB claims to have been one of the first farm-to-table restaurants at the shore, and its offerings reflect the season.

13. Get your fill of half-priced appetizers like the “colossal” shrimp cocktail and lobster spring rolls during the daily happy hour at the venerable Knife and Fork Inn in Atlantic City. Dating back over a century, this is one of AC's few sure bets.

14. Have you yearned for wiener schnitzel and other authentic German dishes with a view? Then volksmarch to the bayside Dutchman's Brauhaus in Manahawkin, which has been going full oompah since 1952.

15. Make Brigantine's Aunt B proud by downing a gargantuan sundae, like the Greenhead, a combo of mint chocolate chip ice cream with Oreo and chocolate cookie crunch topped with hot fudge and whipped cream.

16. Pick up fresh-off-the-boat scallops at Cassidy's Viking Village Fish Market in Barnegat Light. Cook with the nearest grill, oven or saute pan, and savor a taste of the sea on a plate.

17. Succumb to the sugary call of saltwater taffy by filling up a bag at Shriver's in Ocean City. Watch the taffy emerge from a Willy Wonka-like contraption at the rear of the store, then call your dentist to schedule the inevitable cleaning.

18. Except for the fact that Atlantic City's White House calls its sandwiches “subs,” instead of hoagies, they set the standard for the shore.

19. For devotees of Beach Haven's Crust & Crumb Bakery, two words conjure up visions of buttery goodness: elephant ears. You will remember them, too.

20. Why choose among Ocean City boardwalk donut rivals Brown's and Oves? A half-dozen from each should set the table for an (un)healthy debate about which is better.