The 2016 Philadelphia Union by the numbers 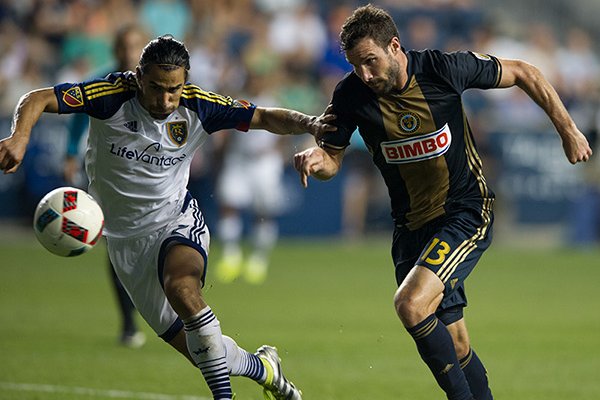 No American scored more goals than Chris Pontius in 2017.

Statistics can be hard to sell in soccer.

Goals and assists are simple enough to study, but metrics like possession and passing can often be twisted into some skewed narrative that really doesn't explain what happened in a 90-minute game.

The arbitrary nature of numbers can certainly be applied to any sport, especially baseball and football, where there's just more to collect and parse. Soccer often requires the "eye test" to properly evaluate, because I guarantee that not one national media member or average fan is watching the amount of games required to share an educated take on a guy like Warren Creavalle or Sam Cronin.

Anyway, here's a non-scientific look at some of the more interesting numbers from the 2016 campaign.

Alejandro Bedoya's base salary. Bedoya became the Union's record signing and the first player in franchise history to earn more than a million dollars.

Total budget charge for the starting defense, plus Andre Blake. Fabinho had the largest cap hit, at $142,008. Richie Marquez had a $63,000 base salary, Keegan Rosenberry hit at $62,500, and Ken Tribbett earned $51,500. Joshua Yaro and Andre Blake did not affect the Union's cap hit because of their status as Generation Adidas players.

This was the amount of money generated by the Union's 50/50 raffle. Half of the proceeds were donated to the Philadelphia Union Foundation, so if you bought raffle tickets this year, you helped raise $90,655 for charity.

The amount of money earned by Ilsinho per shot on goal. The Brazilian finished the season with 30 shot attempts, but turned just seven on frame, with one tally from the run of play. His other goal was a penalty kick.

Total minutes played by Union rookies in 2016. No other team handed out more minutes to first-year players.

Total minutes played by Keegan Rosenberry. The rookie set an unbreakable record by playing every minute of every game. There is, of course, the possibility of expanding the season to 35 or 36 games, which would allow a player the opportunity to earn more total minutes. However, Rosenberry played 100 percent of the available regular season minutes, which is a figure that mathematically cannot be topped.

Total minutes played by Richie Marquez. Rosenberry's accomplishment in this department overshadowed the fact that the Union center back was third in this category. Columbus captain Michael Parkhurst was second.

Total minutes played by Chris Pontius. Coming off a series of injuries that severely limited him at D.C. United, Pontius set a personal record for minutes in 2016. The Union's sports science staff kept him healthy and rested over the course of the eight-month season.

Total minutes logged by designated players. Until August 6th, when Alejandro Bedoya arrived, the Union hadn't had a single minute of play from a DP, which was due to Maurice Edu's long-term injury. For comparison, designated players earned 6,065 minutes for Toronto FC and 6,919 minutes for New York City. Philly finished dead last in this category, even behind D.C. United, who saw Fabian Espindola play 900 minutes before transferring midseason.

Fouls suffered. Philly was top five in this category because of C.J. Sapong and Tranquillo Barnetta's ability to win free kicks in the opponents' half of the field.

Minutes played by Charlie Davies. Acquired in a midseason trade, the forward appeared in eight games as a late substitute and attempted just one shot.

Fouls suffered by C.J. Sapong, who finished sixth in the entire league in this category. Sapong was fouled once every 35 minutes, which would be an even lower ratio if referees hadn't swallowed their whistles in a number of games.

Goals scored. The Union actually finished 6th in this category, with balanced contributions from the midfield and defense.

Offside calls against the Union. Philadelphia was in the bottom three in this category, which is not surprising when you consider C.J. Sapong's style as a hold-up forward who likes to drop deep to support his midfield.

Fouls conceded by C.J. Sapong. The Union forward lead his team in both foul categories (conceded and suffered).

Passes per game from team leader Keegan Rosenberry. The top Union player in this category finished behind 42 other MLS players.

Goals conceded in the second half

MLS players who scored more goals than C.J. Sapong. 16 midfielders, or midfield/forward hybrids, scored more goals than the Union's top striker, including two of his own teammates. Patrick Mullins and Michael De Leeuw, who joined D.C. and Chicago midseason, scored the same amount of goals as Sapong in half the time.

To put CJ Sapong's slump in perspective: Sapong is tied with Ken Tribbett & Richie Marquez in goals since May 20 with 2.

Goals scored in the second half

Goals scored in the first half

Goals conceded in the first half

MLS players with more shots than any Philadelphia player. Pontius lead the way for Philly with 66 shot attempts.

Roland Alberg's scoring chance percentage. He lead the team in this ratio with 9 goals on 47 total shots. Pontius had 12 goals on 66 shots, for a percentage of 18.2.

Substitute appearances for Fabian Herbers, the most among all Union players.

The number of goals scored by Chris Pontius. The left winger was the Union's leading goal scorer in 2016 and matched the career high he set at D.C. United in the 2012 season.

Total wins. Despite entering the playoffs for only the second time ever, the Union failed to matched the 12 wins earned by John Hackworth's 2013 team, a club that did not qualify for the postseason.

Yellow cards for Tranquillo Barnetta, who lead the Union in this disciplinary stat.

Number of games without a loss from April 23rd to June 1st. The Union entered the Copa America break by setting a franchise record unbeaten streak. That stretch featured three wins and five draws, including road draws in Colorado and Montreal on short rest.

Number of games without a win from September 3rd to October 26th. The Union finished on a 53 -day winless streak, falling just short of the franchise-record nine game winless streak that was set in the spring of 2014.

Assists for Fabian Herbers. The Union rookie lead his team in this metric, beating out Pontius and Fabinho, who finished with six assists each.

Interceptions per game for Warren Creavalle, who finished in the top 15 among all MLS players

Tackles per game for Creavalle, who also finished top 15 in this category

Game winning goals for Roland Alberg. He lead the team in this category despite playing just 1,153 minutes.

Aerial duels won per game by Chris Pontius. He finished tied for 5th in the league in this category. Only Walker Zimmerman, Kei Kamara, Steve Birnbaum, and Aurelien Collin did better.

Key passes per game from Tranquillo Barnetta. He finished 8th in MLS, behind four Argentinian players, two Americans, and one Albanian.

This was C.J. Sapong's "unsuccessful touch" rating, which is a metric used to determine "bad touches" per game. For reference, Cyle Larin was rated to have 3.4 poor touches per game. This is the most arbitrary of all statistics.

Penalty kicks conceded. Philly was excellent this season at showing discipline inside the box.

Union players who finished in the top ten for goals, assists, shots, or shots on goal.