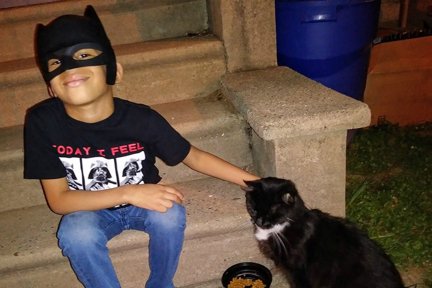 5-year-old Shon Griffin has a special connection with the rescue and foster cats his family cares for.

As if a 5-year-old boy who feeds rescued cats from Philadelphia's streets isn't adorable enough, Shon Griffin even wears superhero costumes when he's on the job.

His family calls him "catman," according to a recent ABC News feature.

Family members realized Shon had a gift for connecting with cats when he was 3. Now, he regularly helps his aunt, Kris Papiernik, and her fiance, Kia Griffin, care for stray cats in four different locations in the city. The two founded Kolony Kats more than a decade ago.

"His favorite thing to do is give them treats," Papiernik said. "He knows how to dish out the dry food, fill up the water bowls without any directions from us."

"When he is home with us, the indoor kitties get lots of love, affection and playtime from Shon," she said. "They sleep with him and wake him up with kisses. He truly loves them, and they love him back just as much."

Papiernik and Griffin told Metro this week that Shon's relationship with the cats inspired an idea to write a children’s book designed to educate kids on how to help care for feral cats in cities. The book comes out this fall, according to the report.

“We’re not telling children to go out and find all the feral cats you can. The book says don’t touch them, don’t pick them up, they might get scared … but just because they’re scared, doesn’t mean they don’t still deserve love and to be treated with respect,” Papiernik told Metro. "We hope we can maybe inspire a couple of other kids with a book,” she said.