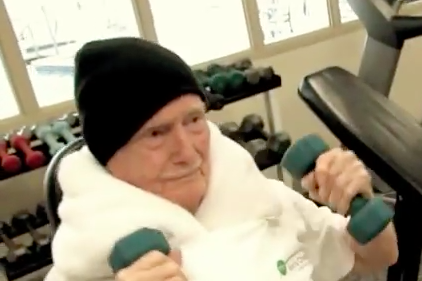 At the ripe age of 94, South Philadelphia native George "Scotty" Scott is training hard for the 121st annual Penn Relays.

Scotty gave a sneak peak of his exercise routine in a video of him preparing to participate in the event set for this weekend. Now a resident of Ann's Choice Retirement Community in Warminster, Pennsylvania, Scotty can be seen shooting hoops, lifting weights and passing on a meal of raw eggs while the theme to "Rocky" plays in the background.

Adam Roma, a friend of Scott's, admires the senior's work ethic in the video.

"It's motivation for me because I have some aches and pains at age 44, and if he can do it at his age, there's no excuse," Roma said.

"Scotty here is probably the fastest guy in the United States in his age group," said his trainer Dave Marovich.

"I'm trying my best," Scott said in the video.

Scotty's story is inspiration enough. However, it would be nice if he did one thing on Saturday: