There are 14 of these programs in the state – more than any other in the country. That total is expected to double within the next 12 months 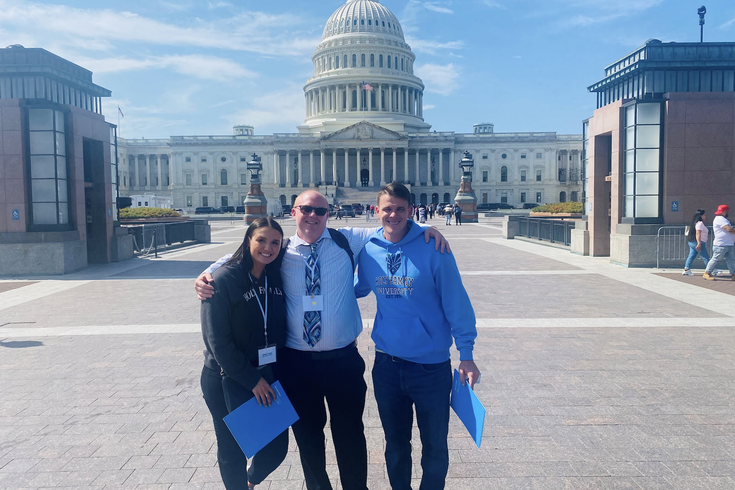 Holy Family University is among 12 Philadelphia area colleges that have received funding to create collegiate recovery programs for students with substance abuse disorder. Above, Holy Family's Dr. Patrick McElwaine is pictured outside the U.S. Capitol with grad students Mark Ryan and Brittany Knight, who will help launch school's CRP.

About 2 of 5 college students in the United States meet the criteria for substance use disorder and are in need of treatment. At such a vulnerable stage of life, many of these students have been lacking the kind of accessible support and structure they need to address the steep challenges they face without abandoning their educational goals.

At a forum in Washington, D.C. this week, the Independence Blue Cross Foundation announced that it is committing $1 million to the expansion of collegiate recovery programs, known as CRPs, which offer students a range of resources to regain their footing. The foundation is partnering with the Association of Recovery in Higher Education, an organization that has helped establish CRPs at 156 schools in the U.S.

Pennsylvania has 14 of these programs — more than any other state — and 12 of them are at schools in Philadelphia and the surrounding suburbs. This week, Holy Family University in Northeast Philadelphia announced that it had received a $50,000 grant to develop a CRP.

'It sets us up to be successful'

For many people with substance use disorder, finding a reliable social safety net is one of the few things that gives them the courage to confront difficult stigmas around addiction and recovery.

Michael DiMaio, who attended the forum in Washington on Wednesday, is in long-term recovery and serves as an ambassador for the Independence Blue Cross Foundation's "Someone You Know" campaign.

"Everyone knows someone that's struggling during this opioid epidemic," DiMaio said. "I thought it was crucial for me to break my anonymity and share my recovery story to help break the stigma that's associated with substance use — and also to inspire hope to those who are struggling and their families."

DiMaio is a U.S. Air Force veteran whose military career was cut short by service-related injuries. When he returned to his hometown Drexel Hill in the late 1980s, his mental health suffered and he turned to substances after another injury on the job as an electrician.

"My drugs of choice were cocaine and heroin," said DiMaio, who entered a Twelve Step recovery program in 2013.

Once DiMaio began to feel more solid, he attended Bucks County Community College and earned an associates degree in paralegal studies. He then enrolled at Villanova University, where he expects to graduate next spring with a bachelor's degree in public service. He's currently an intern at the Bucks County District Attorney's Office and founded a nonprofit called The Infinite Mission, which provides outreach to people struggling with homelessness and addiction in Philadelphia.

DiMaio credits his educational success to the services that were available to him as a veteran.

"I always had an endless amount of support. I had access to a veterans counselor, and any time I needed to talk, I always was able to go to the veteran's center," DiMaio said. "That's where I was able to decompress, chat with other students, drink coffee and study."

DiMaio said it's imperative that the model used for veterans be implemented and made available to college students of all backgrounds.

"The ultimate goal is to allow recovering students to participate in a program while achieving their educational goals," DiMaio said.

College campuses are often rife with peer pressure and temptations that can lead newly independent students down a dangerous path in life. It's a pattern DiMaio sees routinely among his peers in recovery. At his Twelve Step program, he said he often hears familiar stories about people who succumbed to substance use during college.

"I can't tell you how many people start off their sharing saying, 'My drinking or my drugging really got out of control while I was in college,'" he said. "What better way to help secure our future than to help students thrive on a college campus. Every student, not just veterans, should have access to good mental health and drug and alcohol resources. It sets us up to be successful."

'A different kind of culture'

The new CRP at Holy Family University will be led by Dr. Patrick McElwaine, a licensed clinical psychologist and counselor who also has been in recovery from alcohol abuse for more than 15 years. McElwaine is a Holy Family alum who will bring his own experiences in recovery and as a practicing therapist to the school's CRP.

"When we looked at this grant program, we realized that we have an amazing counseling center that has been overwhelmed during the pandemic with students related to anxiety, depression and addiction," McElwaine said. "A lot of the time, we're referring out to a local agency. This will create a different kind of culture for Holy Family University."

The CRP will have a dedicated space with signage and literature for students to check out if they or someone they know needs help. It also will be open to students who may be living in households where substance abuse creates stress in their lives.

"It offers a place to go if you need to talk to somebody," McElwaine said. "Professors and staff will be able to see warning signs — things that they might have missed in a classroom."

McElwaine explained that substance abuse is often an umbrella for anxiety, depression and trauma. People turn to alcohol or drugs to deal with these problems, but they don't always realize what's happening to them and the path that awaits them if they don't get help.

"When you're struggling early on, you make jokes. You use a lot of defense mechanisms. You rationalize why you use," McElwaine said. ''Well, everyone else is drinking!' You joke, 'I'm not an alcoholic. Alcoholics go to meetings!' Or you project onto people. 'I'm not as bad as that guy over there. He needs help. Why is everyone onto me?'"

Looking back more than 20 years, McElwaine said a CRP could have helped him seek counseling earlier.

"I know for a fact that at least one time, I would have ventured into a CRP room just to check it out," McElwaine said. "To see the signs on the door about the support the university offers, it would have maybe piqued my interest and got the ball rolling. That's what I'm excited about with this new program at Holy Family. It's just going to be present — and I'm hoping it will create not just a culture of acceptance, but of recovery."

Since Holy Family's CRP was announced, McElwaine said he's received numerous calls from people who want to get involved and volunteer.

"It just speaks to how much our community sees the need for programs like this, specifically one targeting college students," McElwaine said. "Sometimes, navigating the world with freedom away from parents and high school, they can give in to peer pressure."

In his own recovery, McElwaine recalled having a hard time committing to sobriety at first. He would hear stories from others in recovery about the newfound happiness and success in their lives, but he doubted that would be true for him. He expected that giving up substances would take the fun out of his life and leave him unhappy, but in due time, he had the same personal breakthroughs that so many people describe.

"The things around my life and my own world — that didn't change. It was my response to it that changed, and that's what recovery offers," McElwaine said. "That's the one thing that I would love for students who are struggling with mental health problems or addiction to understand. It may seem impossible for you, but slowly things start to change."

The problem of substance abuse among college students remains much more widespread than many colleges have the resources and capacity to address. McElwaine pointed to 2019 statistics from the Substance Abuse and Mental Health Services Administration, which estimated that there were 840,000 full-time college students who either were or would be in recovery.

At that point, there were still just 100 schools with formalized CRP programs.

AHRE and the IBC Foundation are expected to provide CRP funding to another 14 colleges in Pennsylvania over the next year. Schools that have received a $50,000 grant may be eligible to receive a second $25,000 grant, and colleges can use the money for technical assistance in a variety of ways that best serve the recovery needs of their students.

"The Independence Blue Cross Foundation's commitment to collegiate recovery is part of our greater effort to create and promote more inclusive recovery environments," said Heather Major, executive director of the IBC Foundation. "Every individual deserves the opportunity to reach their full potential, including a college degree and career they enjoy. Supporting recovery programs helps these students while away from their natural support systems and is a top priority for the Foundation. We look forward to forging ahead with ARHE to make further progress in this space."

The CRP investments are part of the IBC Foundation's larger STOP program, which has invested more than $3 million since 2017 to tackle problems related to the opioid crisis. Advocates also are hopeful that lawmakers in Washington will commit additional resources to CRP programs in the years to come.

"The support of the Independence Blue Cross Foundation has made a tangible impact for students in recovery — not just in the Greater Philadelphia region, but across Pennsylvania," said Kristina Canfield, executive director at ARHE. "This effective model including direct technical assistance is a game-changer, and we are eager to replicate it with schools across the nation."