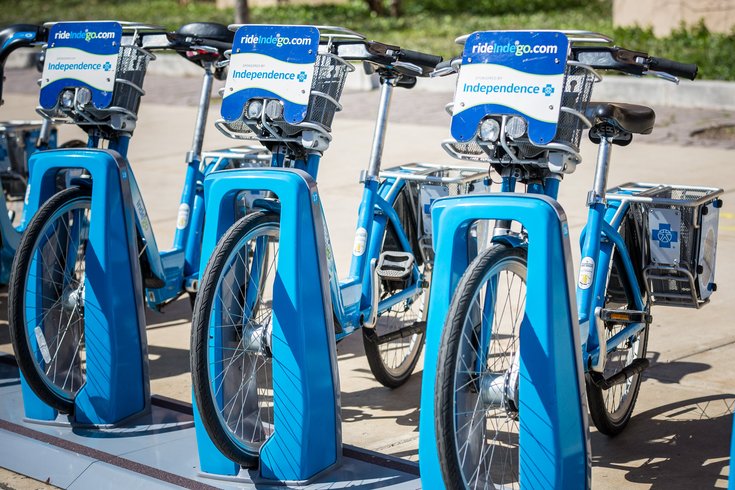 Indego bikes on a rack near 10th and Locust streets on the campus of Thomas Jefferson University.

Philadelphia's 2-year-old bike-sharing program Indego added another 14 stations this week, many of them in South and West Philadelphia neighborhoods where pickup and drop-off points had been in shorter supply.

The program, sponsored by Independence Blue Cross, will now renew its efforts to ensure social and racial equity in bike sharing.

City Deputy Managing Director Mike Carroll announced Thursday that Philadelphia has been awarded a $2.5 million grant from the JPB Foundation for the locally based Better Bike Share Partnership (BBSP). The national collaboration aims to improve access to bike-sharing programs in cities around the country.

A 2014 grant from the JPB Foundation provided Philadelphia with $5.8 million to establish ongoing relationships between the city's Office of Transportation & Infrastructure Systems and organizations including People for Bikes, the National Association of City Transportation Officials and the Bicycle Coalition of Greater Philadelphia.

The latest grant from the JPB Foundation will extend to BBSP over the next two years. To date, the partnership has helped Philadelphia become a national leader in bike-share education and outreach.

“The JPB Foundation’s support has been absolutely critical to our successes at making Philadelphia’s Indego bike share the most equitable system in the country,” Carroll said in a statement.

Launched in 2015 with 60 stations and 600 bikes, Indego has expanded twice and now has a total of 119 stations and 1,200 bikes available for round-the-clock use by Philadelphia residents and visitors.