All about the Benjamin: Tour guide channels millennial Franklin 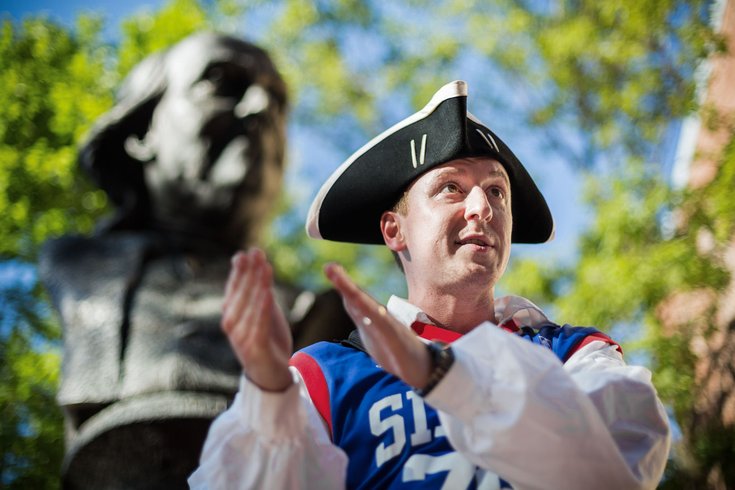 'Young Ben' stands in front of an Old City statue of an older-aged Benjamin Franklin.

Looking to learn the literal and figurative rap on Philly’s most famous citizen, Ben Franklin?

Scratch that: Franklin was the most famous man of his time – anywhere in the world, says tour guide Chris Kuncio.

Kuncio, 28, a Philly native, has all of that uniquely covered in his tours.

Lots of Kuncio’s witty insights into Franklin and the rest of the Founding Fathers are delivered in rap.

It’s as if Lin-Manuel Miranda, the creator of "Hamilton," donned a 76ers jersey and performed on the streets of Philly – without the outrageous price tag. His tour, which earns a perfect score from TripAdvisor reviewers, is just $25 a pop.

But forget what you think you know about the fellow on the $100 bill.

Kuncio does not channel the old, fat, gouty, balding Franklin with a bad mullet malingering around Independence Hall like an out-of-work panhandler.

Instead we get the dynamic young Ben – entrepreneur, pioneer, public intellectual, humorist, civic leader, lady’s man, a polymath – the man long before the myth.

But “flawless in making my own image,” he says, grinning in his role as young Ben.

Overseas traveler. Bookkeeper. Shopkeeper. Father of an illegitimate son – maybe with a prostitute, maybe with a member of society – since he squired ladies across the spectrum.

Oh, and also a common-law husband to yet another woman – already legally married to another man.

Founder of a self-improvement society. Member and leader of the Masons. Founder of the first lending library. Publisher and writer of an almanac. Clerk for Pennsylvania Assembly.

So make that Millennial Ben Franklin: The oldest modern millennials are just turning 35. Today’s millennials have some catching up to do when it comes to keeping up with Benjamin. 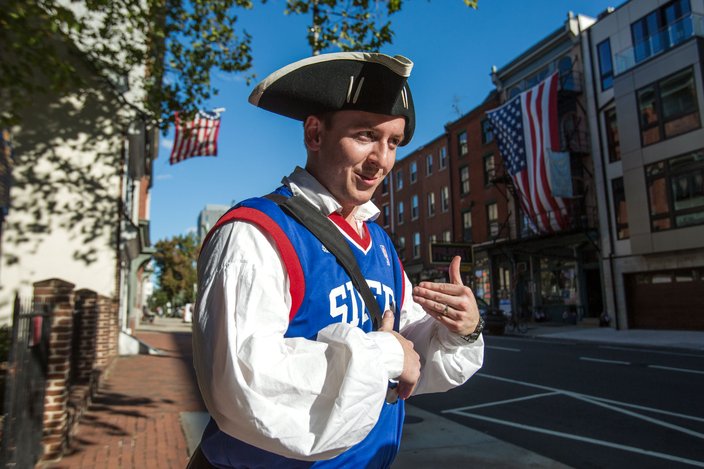 'Young Ben, Philly's O.G.' is a character created and portrayed by local teacher, Chris Kuncio. Here, Young Ben speaks in front of the Betsy Ross House in Old City during a recent tour.

Kuncio grew up in Center City, surrounded by history and legend – don’t get him started on Betsy Ross unless you have some time. He studied history and political science, attending Pitt and then St. Joseph's universities.

And he teaches – often in rap – at a Center City charter school, where he soon discovered a bit of wit goes a long way toward learning and retaining. As a teacher, he quickly realized his students thought of Franklin as “an old fart,” not the fascinating younger man he found so compelling.

A veteran tour guide with a gregarious nature, Kuncio’s history rapping as Millennial Ben was soon born. Here's a sample:

"How does a young and relentless runaway apprentice,

And become such an iconic, enigmatic, eccentric

Who was a lot smarter, hardworking self-starter

By 14, joined his brother in a newspaper war up

In Boston, the Puritan tradition was waning,

And draining to the population whom they failed to contain…

"Thus began my story, the rest is US history 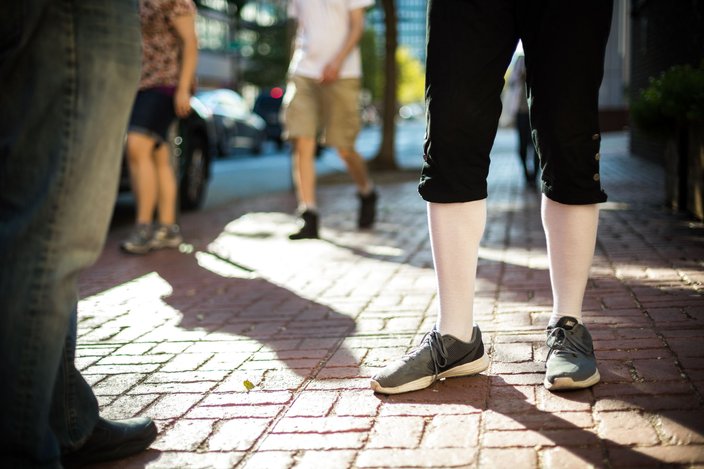 Young Ben gives walking tours of Old City Philadelphia, and as you could imagine being dressed as a colonial figure wearing a 'Franklin' Sixers jersey, many passers-by quizzically look on while taking photos of his persona.

When Kuncio leads a tour, he’s half 1720s – tri-corner hat and breeches – and half 2016 – sneakers and a 76ers jersey. He sees his take on history as a possible television show.

Kuncio plays the role of young Ben in his own voice, but informed by a deep knowledge of the man, which explains his character’s wonderment at modern tech and cheeky takes on modern times – especially politics.

But he isn’t blinded to Franklin’s own peculiar character.

Such as Franklin’s standing as a sexual athlete with two mistresses while living as a diplomat in Paris.

Or a man with an uncanny knack for for doing public good – while also making lots of money.

Kuncio wraps up his PhillyVoice tour as Millennial Ben:

Killing with a bit of Franklin's charm, he winks and smiles in character.