All-Sport Power Rankings: The good, the bad and the ugly 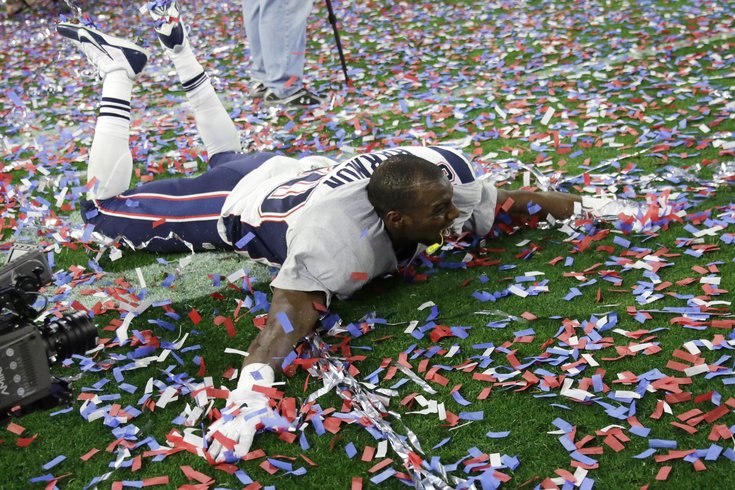 Last week, I tried something a little different with my weekly power rankings and decided to look at who was having the worst week in sports. It was a lot of fun. It began the week before when I threw in a Rangers fan wearing a Tim Tebow hockey sweater. Suddenly, I realized I was wasting a ton of material each week by only focusing on the positive moments in sports.

Because we - meaning the media and fans - are seemingly obsessed with the gossip and negative news surrounding athletes and sports celebrities, it felt appropriate to examine both the thrill of victory and the agony of defeat. I don't want to come off as biased; this is hard news, people.

With that begins said, here's a look at the good, the bad, and the ugly from this week in sports:

1. We are the Champions

Anyway, it's no surprise that the Patriots sit atop my rankings -- the good portion anyway -- after an impressive come-from-behind win over the Seattle Seahawks in Super Bowl XLIX.

Bill Belichick overcame all that was deflategate - at least so far, as the investigation by the NFL is ongoing.

Rob Gronkowski got to party all night.

LeGarrette Blount quit his way to a Super Bowl ring. He also had a drug charge against him dropped on Friday.

2. The Hawks will never die

Well, unless they face a certain seabird from New Orleans.

Before Monday night's 15-point loss to the Pelicans, the Atlanta Hawks hadn't lost since Dec. 26. They went the entire month of January with a perfect 17-0 record as part of a 19-0 run that helped them go from 21-8 to 40-8 until that loss to the Pelicans. They don't have an all-star on their roster, but currently sit atop the Eastern Conference, seven games ahead of the second-place Raptors.

Now let's play a game. Start naming Hawks players. If you can get four, I'll be impressed.

Don't worry if you couldn't get it done. Stevie K. forgives you.

Pat Burrell was apparently partying with former Phillies teammate Chase Utley over the weekend. The Phillies second baseman was kind enough to post a video on instagram of Burrell riding down a slip-and-slide on the beach. 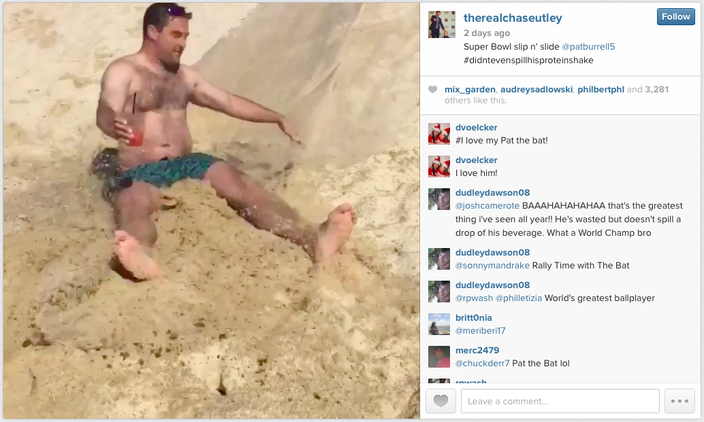 Look at that form.

All those years catching fly balls in the outfield were to prepare him just for this; to slide down a sandy waterfall without spilling one ounce of that delicious looking beverage. And, Chase, #idoubtthatsaproteinshake

I want to go to there. I mean, tell me that doesn't look a hell of a lot better than Philly in the dead of winter...

Apparently, Super Bowl season is a great time to be a comic. There were a ton of funny things going on around the big game. Here are a few of my favorites:

Key and Peele came out with a new East-West game promo...with a twist:

That doesn't even take into consideration all the commercials that aired during the game, nor does it include the circus that was Super Bowl Media Day.

This may not be good news for all those who loathe the overwhelming amount of draft analysis that gets done between now and the NFL Draft. But your opinion doesn't matter much. They're going to jam it down your throat like you're the first victim in Seven.

Just accept it and know that nothing can be done to stop it. It won't make it go away, but at least it may not make your ears bleed.

The numbers around the Buffalo Sabres are almost as mind boggling as those around the Hawks, but for the complete opposite reasons.

They are a league-worst -85. The next closest team in the East is Columbus at -31. The closest team overall is Arizona at -54.

They've lost 14 straight games and because all were in regulation, have no points to show for their efforts.

They didn't win once in the month of January. Their last win was on Dec. 27.

They won't be getting any relief. They're next five games are all vs. teams over .500 until they play Flyers (currently at .500) on Sun, Feb. 15. They only play two games in Feb against sub-.500 team (Devils and Blue Jackets; both on the road).

Man, and I thought the Maple Leafs were struggling...

I feel bad for Seattle fans. I really do.

Moreover, I feel for Seahawks coach Pete Carroll, who has been taking much of the blame for Russell Wilson's goal line interception in the final minutes of the Super Bowl.

Why didn't you run the ball!? You have Marshawn Lynch!

To be honest, I liked the play call. It was a bad throw by Wilson. That ball needs to be thrown lower and more to his back side, especially if the defender is on his front shoulder. Ricardo Lockette could have made a slightly better effort, but unlike his offensive coordinator, I'm not going to blame him entirely. That quick slant play works so often in that spot, it's hard to blame the coach for making that call.

Carroll immediately took the blame, as a good coach should, but he didn't make the throw, miss the catch, or even call the play. He's taken his team to two Super Bowls in the last two years, so I'm fairly certain he knows what he's doing.

All last week leading up to the Waste Management Open in Arizona, all the talk was about how Tiger Woods was back. This is becoming a bit of tradition this time of year, as is the ensuing disappointment when Woods inevitably fails to return to the player he once was.

Then, Woods put up a career-worst 82 on Friday, which included a snowman, and failed to make the cut.

He didn't even stick around to watch the Super Bowl as he originally intended. It got so bad for Woods, that he was booed by the notoriously rowdy crowd at TPC Scottsdale.

That's a far cry from this reaction he got back when he was on top of the golf world:

I miss that Tiger...

A girls high school hoops game in Detroit ended with a score of -- I kid you not -- 80-0. Cass Tech destroyed Detroit Osborn and here's the scoreboard to prove it:

I had Detroit Osborn +72. I knew that line was too good to be true.

The former wrestler cheated, got caught, and was disqualified from Wing Bowl before the first round even ended.

So why did Mick Foley cheat? As he told PhillyVoice, he was afraid of vomiting all over the stage. Plus he was a little intimidated by Molly Schuyler and eventual champ Patrick Bertoletti, who ate a record 444 wings during the 30 minute competition.

I know who approves of that: 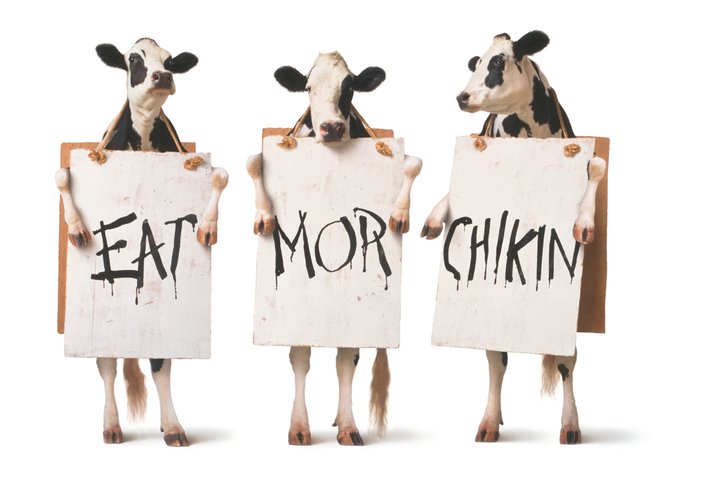 After being caught soliciting a prostitute at 7 a.m. on Monday morning, former defensive end Warren Sapp was fired as an analyst by the NFL Network.

Browns rookie quarterback and former Heisman trophy winner Johnny Manziel entered a rehab facility last week. If he's really in need of help, then good for him. And good effort by his publicist trying to bury this story on the day after the Super Bowl. It didn't work, but you tried.

Friday was apparently a big anniversary for former Kentucky Wildcats star Demarcus Cousins, now with the Kings. It had been five years since Outkick the Coverage's Clay Travis (now with FOXSports.com) tweeted that Cousins would be arrested.

Apparently, he didn't forget what Travis said and decided to let him know how wrong he was. 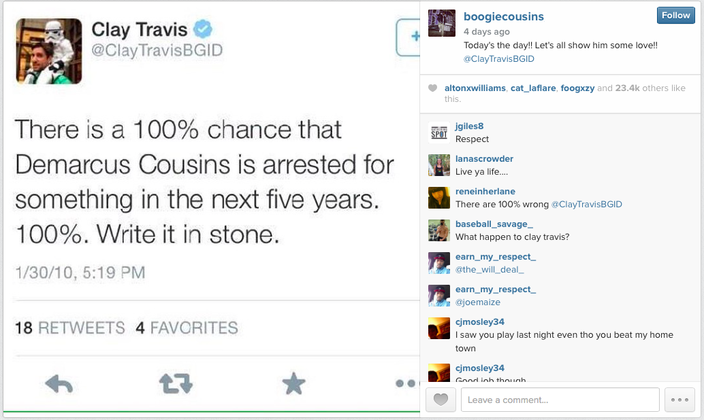