Even after win over slumping Leafs, there's 'a lot of work to be done' 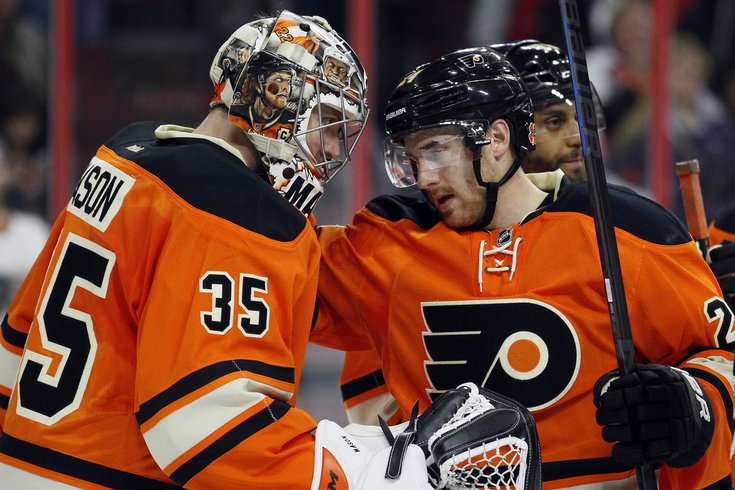 For the first time this season, the Flyers have won four-straight games. More importantly, the team is back at .500 for the first time since Dec. 23 after a 1-0 shutout win over the slumping Toronto Maple Leafs at the Wells Fargo Center.

Reminder for anyone claiming #Flyers are now back to level ground: they've played 51 games and won 22. That's not exactly .500.

"We put ourselves in a little bit more of a manageable position to get back in the hunt, but there’s still a lot of work to be done."

As for the Flyers, they're rapidly piling up wins, but aren't really putting themselves back into playoff contention. Over their four-game streak, the team has gone from being 11 points out of the postseason to just nine out.

Winger Jake Voracek, who leads the NHL in scoring, said the players are aware of where the team sits in the standings, but they're going to continue to take it one game at a time.

"We have got to go game by game," he said after the game, the 500th* of this career. "We can’t just look too much ahead. We know how many points we’re out and how many points the other teams have. We have just got to keep grinding. Like I said, it’s all in our hands.”

Following the win, goalie Steve Mason, who was spectacular in the shutout win, said the Flyers recognize that they still have a long way to go before talking playoffs.

"We put ourselves in a little bit more of a manageable position to get back in the hunt," he told reporters. "But there’s still a lot of work to be done."

That's because the teams just ahead of them in the wild card race, Boston and Washington, continue to get points regularly. Over their last 10 games, the Bruins are 8-1-1 (17 points) and the Capitals are 4-3-3 (11 points).

Unless the Flyers can keep up this pace, which will be nearly impossible, they'll need some help from other Eastern Conference teams. As Frank Seravalli of the Daily News points out, the last playoff spot will be harder than normal to catch:

Since you all loved the last reminder: Last East wild card spot is on 100-point pace. #Flyers on pace for 82 - after winning 5 of 6.

Geez, Frank. Talk about being a pessimist.

The Flyers will take on the Islanders on Thursday to complete their current five-game home stand, a game that they need to win. Normally, going 4-1 on this home stand would be good enough.

However, the Flyers dug themselves into quite a hole already and will need as many points as possible before they head out on the road for four games. Luckily for them, the first game of that trip is in Washington, meaning they'll have a chance to make up some ground on Alexander Ovechkin's Capitals.

It's still too early to tell if this team will be able to grab on to a playoff spot, but things are trending in the right direction. Mason has been hot. They've been getting contributions from guys like Michael Del Zotto. And they should be getting defensemen Braydon Coburn and Nicklas Grossmann back from injury just in time for a late playoff push.

Speaking of Mason, here's a look at his great game and some other things that stood out in the Flyers' 1-0 win over the Leafs.

Mason in the zone

Steve Mason has been great since returning from injury on Tuesday. In three games the Flyers are 3-0 and the goalie has been a big reason for that.

Mason has stopped 78 of 81 shots, including all 30 on Saturday night, for a .963 save percentage. The 1-0 win over the Leafs was his 25th career shutout, he credited the entire defense for helping get it done.

"Tonight was a great defensive effort," Mason told reporters after the game. "My defensemen did an unbelievable job, tonight, blocking shots, clearing lanes, making sure that when I was making a save that they were boxing guys out so that if I did give up a rebound they weren’t able to get at it. Definitely a good overall defensive effort, and that’s what we need.”

Mason's just 26 years old, but he's had injury problems in the past, so the Flyers will need to be judicious in how they use him. However, if they plan on making a playoff push, Mason will surely need to play a key role in that. Luckily for coach Craig Berube, the team will be off until Thursday, meaning Mason will have plenty of time to rest before they need him back between the pipes.

Will that time off hurt the suddenly red-hot Flyers, or will the time off -- despite coming so recently after the all-star break -- be a good thing?

"We'll have to look at it [as a good thing]," Mason said after the game. "We've got a big game coming up against the Islanders, so we'll take it."

Del Zotto on a roll

Not only does his last name sound like a place where you might find delicious, fresh-baked rolls... Okay, that was terrible. I apologize.

That doesn't change the fact that the Flyers 24-year-old defenseman has recorded a point in six straight games, after scoring his team's only goal on Saturday.

He has three goals and four assists in those six games, and the Flyers have won all but one since his streak began in Buffalo two weeks ago. In his previous 33 games this season, Del Zotto had registered just 10 points (2 G, 8 A).

“Things just seem to be going in for me now," Del Zotto said after the game. "I’ve said it all year that I’ve been happy with the way I’ve been playing. I’ve been playing confident and playing reliable in my own end and playing hard, physical and taking advantage of the opportunities when they come offensively.”

Part of the reason for his improved play could be the increased ice time he's seen since the Flyers' blue line was hit with a rash of injuries in the past month. None the less, he's earned it.

The Flyers have sent Petr Straka down to the Phantoms as Michael Raffl returned to practice Sunday.

Roster Update: Petr Straka has been loaned to the @LVPhantoms.

The Flyers won't be in action again until Thursday, when they host the Islanders in the last game of this five-game home stand. By then, second-year winger Michael Raffl, out since Jan. 20 with an upper-respiratory infection, should be ready to return to the line up.

That likely means the end for 22-year-old Petr Straka, who made his NHL debut on Tuesday against Arizona. He had an assist on the Del Zotto's first-period goal and has played well in his three games with the big club (2 A, 17:13 TOI) after registering 17 points (11 G, 6 A) in 39 games for the Lehigh Valley Phantoms.

So far tonight Petr Straka has done about eight good things that wouldn’t show up on a statsheet. Very smart positioning.

Saturday night's game against the Leafs likely won't be the last time you see Straka in orange and black.

Good times at the Well

Neither team plays at home again until Tuesday, when the Sixers host the Nuggets, meaning it will have been 10 days since there was a loss at the Wells Fargo Center.

When's the last time that happened? And the offseason doesn't count. Neither does the Disney on Ice road trip, when neither team played in the building for almost two weeks.