The new Faith and Liberty Discovery Center will feature a large sculpture symbolically representing the Declaration of Independence, U.S. Constitution, and Bible 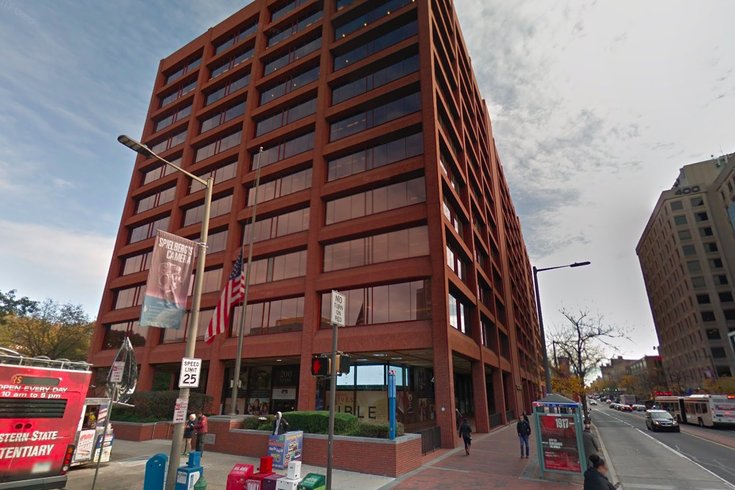 The Faith and Liberty Center is opening in the Wells Fargo building on Independence Mall in 2020.

A $60 million religious center will be joining Independence Mall in 2020.

Development of the space, which will be called the Faith and Liberty Discovery Center, is being overseen by the American Bible Society, a politically nondenominational Christian ministry headquartered in Philadelphia. The new center will occupy 40,000 square feet of the Wells Fargo building's ground floor and concourse levels at Fifth & Walnut streets.

Curbed reported the new center will include five galleries, a 3D theater, and a 9,000-square-foot glass lobby, as well as an "innovation and education center."

Inside the glass lobby will be a two-story sculpture with features representing the Declaration of Independence, U.S. Constitution, and Bible. The American Bible Society described the sculpture as showcasing the "three documents essential to the founding of the United States."

Local Projects, the design firm behind the 9/11 Memorial and Museum in New York, is working on the project. JacobsWyper Architects’ SaylorGregg Studio is responsible for architectural design.

“This will be an exciting experience for people of all faiths and backgrounds," said Roy Peterson, president and CEO of the American Bible Society.

"We want the Faith and Liberty Discovery Center to be a place that unites people, shows how faith has always played a role in our nation, and helps visitors consider what difference faith can make in our lives today.”

Officials expect the Faith and Liberty Discovery Center will draw about 250,000 visitors annually.

The American Bible Society, is one of the country's oldest nonprofits, originally founded in 1816.

The society gained some negative press earlier this year when news broke of its new employee code emphasizing Orthodox Christian values. Among the new code of conduct was a requirement for employees to abstain from sex except in "the marriage covenant prescribed and exemplified in the Bible,” effectively prohibiting sexually active LGBTQ individuals from working for the society.

The employee requirements were the first ever mandated by the society since its founding. Some historians commented the change motioned the society's comfort in proclaiming a more evangelical identity.

“We did this because we believe a staff made up of people with a deep and personal connection to the Bible will bring unity and clarity as we continue our third century of ministry," Peterson said in a statement at the time.

"We understand there are differing views on these matters. This decision does not signal intent to advocate or champion any cause other than increased engagement with the Bible.”

The American Bible Society moved its headquarters to 101 N. Independence Mall East in 2015 after 200 years in New York, shortly after Peterson became CEO in 2014.