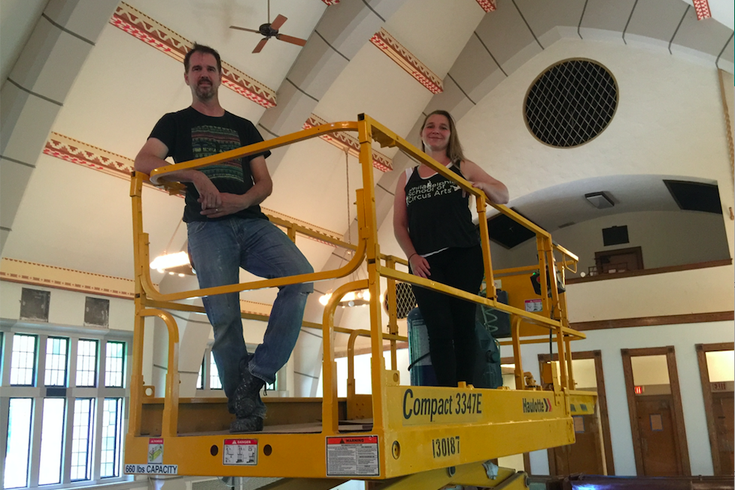 Greg Kennedy and Kitsie O'Neill look out upon a former church that will become the circus-school Circadium's practice and performance space by the time it opens for education in September 2017.

In fewer than three weeks, Philadelphia can boast of another "American first" courtesy of a sprawling three-acre campus formerly known to its Mt. Airy neighbors as St. Madeline Sophie Roman Catholic Church and School.

There, in early September, the non-profit Circadium School of Contemporary Circus will officially open as an educational institution. The full-time, three-year training school for circus artists will be the first of its accredited kind in the country, according to its backers.

On Monday, Circadium hosted a “groundbreaking” event at the site along Greene Avenue right next door to SEPTA's Upsal Regional Rail station. It featured a performance by home-grown performer Kyle Driggs (who can be seen in this video from a recent Phish show) and offered the first public walk-through of the sanctuary space.

All those frills were gone three days later, when Greg Kennedy and Kitsie O’Neill – co-owner and director of programming for the Philadelphia School of Circus Arts (PSCA), respectively – gave PhillyVoice a private tour and chatted about their plans for the school.

Both Circadium and PSCA will be housed on what they’ve termed a “Circus Campus,” as will several related entertainment outfits.

As you can see in the video below, there’s quite a bit of work left to be done in the sanctuary, which will be used for aerial and acrobatic training, as well as a performance space.

“It’s going to be a true ‘labor day’ weekend,” said O’Neill of the rush to get things completed before Circadium’s first-ever class arrives on September 5.

Eleven of the 12 students pursuing associate’s degrees hail from across the country (places like St. Louis and Texas) and the world (Germany and China). There’s one local, though, and her name is Luna Deasy.

She started studying at PSCA – located in neighboring Germantown – when she was 12 and “just fell in love with the community and staff, so when they announced they were starting a professional program, I auditioned and they accepted me.”

While she started out as an aerialist, her time at PSCA veered toward contortion, hand-balance skills and trapeze.

“They realized my body was really bendy,” Deasy said of her flexibility as a contortionist. “It’s pretty exciting. I’m glad this is happening in Philly.” 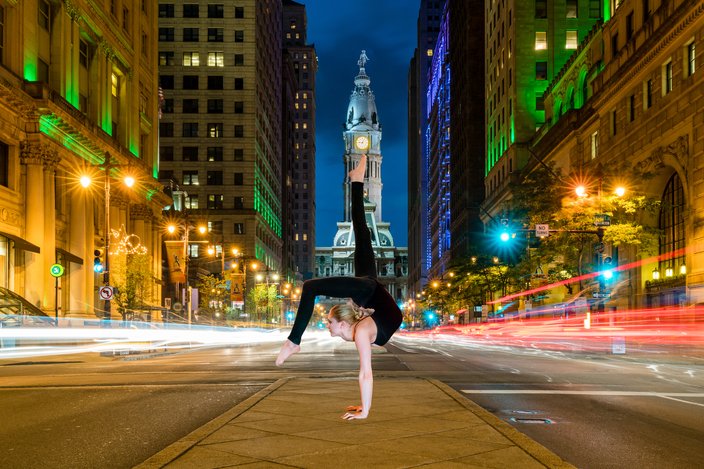 Luna Deasy will be the Philadelphia local in Circadium's first-ever class when circus school starts in September 2017.

The reason it’s happening in Philly is because Kennedy and his wife Shana have, in the past 15 years or so, evolved from performers who had a small studio in their Northwest Philadelphia home to a PSCA operation that sees 400 to 500 students a week come though its doors.

In many ways, it’s a natural progression that led to the unique opportunity to open the first state-approved circus-arts school.

Circadium will offer courses in circus performance (acrobatics, aerial and equilibrations with dance, theater and music lessons among them) and a wide-ranging array of seminars to help students learn what it takes to potentially start up their own traveling performance group, Kennedy said during a break in space-preparation work.

“How to be an entrepreneur. How to make a living from it,” O’Neill said, explaining the overarching mission that the school hopes to impart. “Where you go to school is where you end up, but there is an art movement in Philadelphia that’s so expansive.”

They also noted that having the school in Philadelphia will help change a pattern that they’ve noticed over the years: Talented Americans going to another country (France, Canada, England) for training and never coming back.

Kennedy, who left a job in engineering to pursue juggling and related circus endeavors, said they’d been seeking a location across the city for the past five years or so. 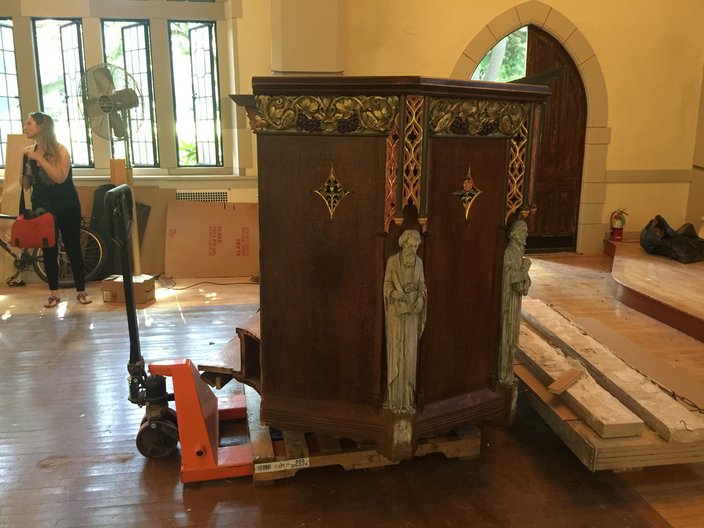 As Circadium moves into a space that formerly housed St. Madeline Sophie Church in Mount Airy, items from the former sanctuary, including the pulpit, are being delivered to a church in the Midwest.

“Like a miracle,” a parishioner at the church alerted them that the property would soon be going up for sale.

They’re not talking dollars and cents yet – that’ll be available via public record soon enough – but suffice it to say, the land didn’t come all that cheap.

Kennedy said Dave Gillies of Give & Take Jugglers bought the 10-bedroom home on the property and will set up operations there as well.

With the property needing to be subdivided, they've already held public meetings with neighbors, and the church location was ideal for retrofitting into a high-ceilinged performance space and building for the classrooms.

Before all that happens, there’s still a ton of work to be done in the sanctuary. Most of the religious artifacts are off the walls, but the lights have to be changed, equipment set up and other intricacies nailed down before classes start after Labor Day.

For students like Deasy, it’s a good thing that it seems to be going according to schedule.

“I really have no idea,” she said when asked about what she’d be doing with her life if not pursuing the circus arts. “I can’t see myself doing anything else.”