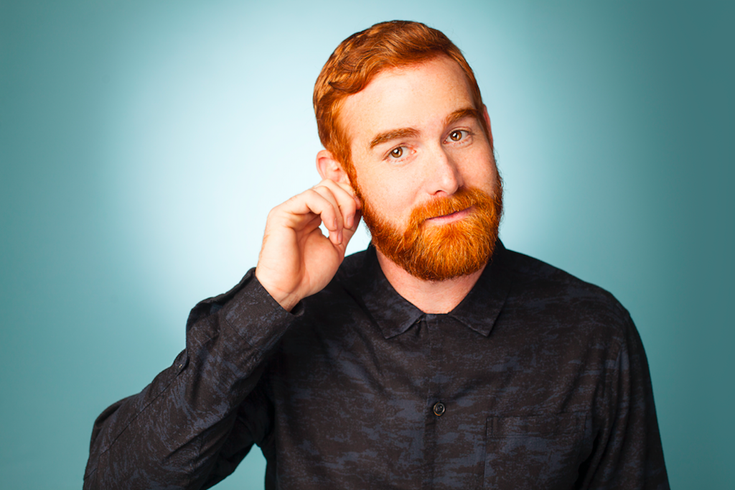 "No matter how rich daddy is, you can't buy funny," says Santino.

Before Andrew Santino arrives at Punch Line Philly for his three-night stint tonight, here’s a story about job hunts and opportunity.

When stand-up comedian Santino left his windy Chicago, Ill. home for the sunshine and potential comic career upswing of Los Angeles, Calif., he wasn’t looking to build a career as an out-and-out thespian. Sure, guest spots on “Arrested Development,” and “The Office,” are fine. The next thing you know, the ginger-haired Santino got busy banking a co-starring role in director-star James Franco’s weird, biographical flick, “The Disaster Artist" (based on Tommy Wiseau making the cult film sensation “The Room”). Then he nailed a regular spot playing real-life comedian Bill Hobbs in the Jim Carrey-produced, Showtime series, “I’m Dying Up Here,” about the L.A. comedy scene of the 1970s and 80s.

“I wasn't even alive until 83', so the 70's don't hold any nostalgia for me, but I do love the era,” said Santino, mentioning how playing Hobbs was an amazing challenge, as an actor and as a comic presence.

“[Bill Hobbs] is sardonic and quite dark at times, and I'd be a liar if I said it didn't take a toll on me. You take stuff home with you as an actor and I don't think anyone is exempt from that. Overall, it was a wonderful experience that tested my acting ability and my mental health and I loved every minute of it.”

Recalling the comedy scene of clubs, agents and comedians, Santino guessed that the same systems, rules and career movements that occurred in 1978 are happening today.

“Truthfully, comedy as a business has changed, but comics will always be the same – attention-seeking, self-loathing people-pleasers that simply want to get rich from making people laugh," he said.

“It's nice to know we all go through s**t to get up in the comedy world. No matter how rich daddy is, you can't buy funny. It's innate. You're either funny and you learn to grow comedically or you're not.”

Between starring in, and maintaining that Showtime program (to say nothing of his other acting gigs, such as a role on “This is Us”), Santino is doing as much acting and getting as much acclaim for that as he is stand-up. Are there downsides to not being able to hit the stand-up stages and open mics as much as he’d like?

“There is only an upside, because I'm working,” said Santino. “The downside would be unemployment.”

As much of a writer and stand-up as he is, Santino has mentioned in other interviews that he is annoyed that so many people know him more as an actor than they do a comedian.

“I have said this in a few interviews, but I don't care what people know me from as long as they know me and like what I did.”

Besides, in the last several months, Santino has become part of the Comedy Central family with a new absurdist special and album of the same name, “Say No More.” Does the comic network steal your soul when a comedian joins forces with it? Some would argue roast master general Jeff Ross seems to be a shell of his former self.

“Comedy Central doesn't steal your soul, but, they will devour your first born,” he said.

“No, I'm proud to have my first album with them. That network is a cornerstone of comedy on television and radio, and they've actually been good to me for many years. Plus, comedy albums had great meaning to me as a kid, but specials were more my speed. I loved watching the comedy come to life on stage. I even get inspired by my peers that are grinding away and killing. Guys I love to watch are Fahim Anwar, Theo Von and Erik Griffin. I wouldn't use the word 'hero.' I would say comics that I admire are Bill Burr, Joe Rogan, Dave Chappelle and the list goes on and on.”

The self-deprecating Santino won’t spend any time during his Aug. 2 through 4 run of Punch Line shows honking about Trump, immigration, Russia or socio-politics in his current set.

“I couldn't care less about getting into political rants. It's not where I derive the best humor. I like mocking myself and my life. I like letting the audience into my brain instead of criticizing theirs.”