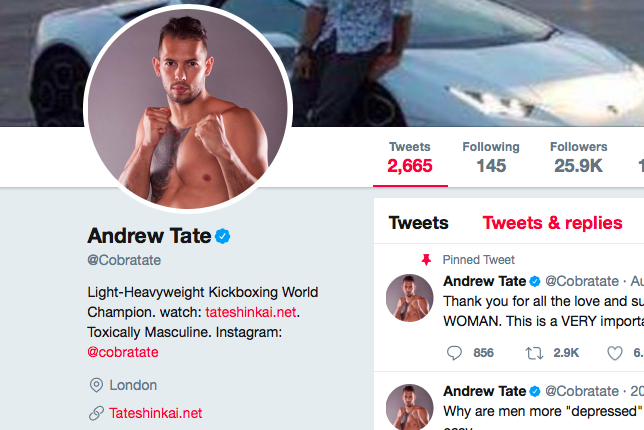 A dismissive tweetstorm from American-British kickboxer Andrew Tate, magnified over the course of the weekend, has opened the floodgates to a social media debate about depression, its root causes and the casual harm done by those who deny it's a serious illness.

The 30-year-old fighter, by no means a mental health professional, fired off a tweet effectively minimizing depression as a lazy decision not to exert effort toward positive life change. September is Suicide Prevention Awareness Month.

In the days that followed Tate's tweet, some critics jumped to scold him for shaming those who suffer from depression. Others discredited his viewpoint as an ignorant denial of science and clinical experience. The charge was led by author J.K. Rowling and comedian Patton Oswalt.

This thread will teach you a lot about the defence mechanism of projection, but zero about the real mental illness that is depression. https://t.co/PqP1n1DMnT

But this is Proof that it only takes ones tweet to realize what a complete ignorant knob someone is...

Folks. #depression is a real thing and nothing to be taken lightly but seriously. Please don't be like that #AndrewTate idiot. 👇👇👇👇 https://t.co/VlJiXzT51U

Everyone has thrown their own pity party at some point, but it's entirely different than clinical forms of depression #AndrewTate

It's people like YOU Mr. Tate that makes depression a reality for millions of people. #DepressionIsReal #depression #AndrewTate https://t.co/nbNaoOab0f

So this is my response to #AndrewTate who took to Twitter today to upset about 1/4 of the population and annoy the other 3/4. Please RT.

Tate, unfazed by the response, refused to back down from his argument in subsequent tweets (and there are many of them, if you're inclined to explore this further). He pointed to numerous supporters who said they either agreed with him or overcame depression by adopting his outlook.

Everrrrryones depressed nowadays tweeting me "im depressed and I think" wow. It must suck to lose at life that hard. Boohoo

Since my post I've had tons of previously and currently depressed people telling me I'm 100% correct. 💪🏼

The way depression is so violently defended is strange. So desperate to be unhappy and have an excuse to not change it. Very odd 🤔

Depression is over prescribed by 10,000%. Weakness is celebrated. Personal responsibility is absolved. That's the reality.

Big pharma supports the depression lie. You can't fix it yourself, tate is crazy, it can only be cured with meds. Keep popping the pills.

According to the Anxiety and Depression Association of America, Major Depressive Disorder affects more than 16.1 million U.S. adults, or about 6.7 percent of the population over the age of 18 in any given year. The biological basis of the condition is often impacted and compounded by multiple social and relational forces.

Much of the criticism against Tate came as a disturbed response to his vitriolic, "red pill" stance that depression boils down entirely to weakness. Would anyone disagree that taking an active approach to the treatment of depression (whether it's chronic or episodic) is a necessary personal commitment?

Diet, exercise does help mood and depression but it doesn't cure it. Medication and therapy are often needed too as the main treatment https://t.co/pB62Ew8rEM

mixed feelings on this one. depression is real but diet and exercise sure goes a long way to improving my mood

Whatever some 3rd rate, z list kickboxer thinks (Aaron Tate?), depression is real, but you can still get through #whoisAlanTate

Some of the most insightful and level-headed responses came from Zelda Williams, daughter of the late actor Robin Williams, who took his life in 2014 after struggling with depression for many years.

Whatever your intention, this 'happy people telling the depressed to get off their ass' mentality is harmful, problematic & wholly useless. https://t.co/8DDD18ZYr4

If you are clinically depressed, your pain is real, & there is help out there. Just ignore the willfully ignorant.

There are no 'experts' in happiness, & he's certainly not an expert in depression. There is pain in suffering. There shouldn't be shame.

To those internet bros out there who think that 'manning up' means showing a complete lack of empathy, fear the day you need it. It'll come.

He literally said that depression is fake, a figment in the mind of the lazy. Disagreeing does not mean I want people to sit and suffer. https://t.co/Umse3f9nqq

Most do. Tragically, it's many times how notoriety works, often given to the undeserving or unwanting. https://t.co/3i8sSfPZkP

To be clear, mental illness & depression can & does affect all tax brackets, ethnicities, genders, ages...

What you're talking about is not clinical depression. It's a philosophical rut at best. To think they're the same is to misunderstand both. https://t.co/bns24pLfAd

You're right. Depression as a word has become mundane and transitory. People use 'I'm depressed' to replace 'sad' all the time. Thoughts? https://t.co/Qdj8FKVUtn

And what a brief, shining second of near rational discourse it was! https://t.co/iSNU8cGvhM

Hope I haven't bombarded y'all too hard. These discussions are important, but please don't troll anyone on my behalf. Have a puppy instead! pic.twitter.com/e9u80X3i4f