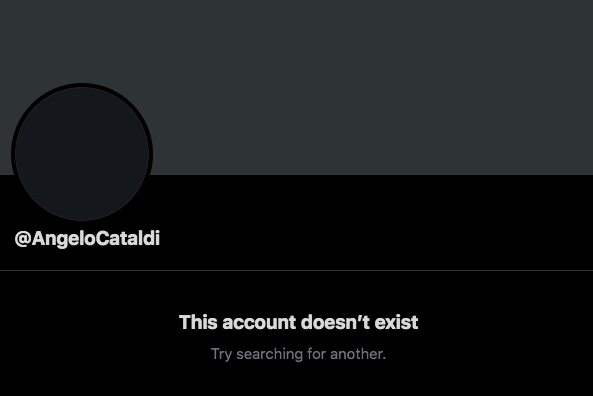 SportsRadio 94WIP personality Angelo Cataldi is known for firing off a controversial tweet or two — sports-related or not. But his tweet on Thursday morning might be the proverbial straw that broke the camel's back, as a few hours later Cataldi had mysteriously deleted his Twitter account.

Cataldi, who serves as the host of the WIP Morning Show, took to social media on Thursday morning to tweet about the clothing (read: underwear) choices of popular golf and fitness social media influencer Paige Spiranac.

MORE: John McMullen: For Eagles, there's no 'replacing' a guy like Brandon Brooks

Whether or not reaction to the creepy tweet is what caused Cataldi to delete his account is still unknown.

Kevin Kinkead, managing editor of the Philly sports blog Crossing Broad, was one of those to notice that Cataldi's Twitter account no longer exists.

what's this all about? pic.twitter.com/dRbqfHYjmw

And many people are rejoicing that the radio host's account was deleted.

@AngeloCataldi about time they mute u

Cataldi, who has been on the air since 1990, is never afraid to fire off an unpopular take on Twitter. One such incident occurred earlier this month when he tweeted that pro athletes should stop posting statements about George Floyd's death and racial injustice, and turn their attention back to sports.

"Lots of strong political statements yesterday from sports figures," Cataldi wrote. "OK, great. Is it too soon to ask—very politely—for all of these people to focus now on what they do best? The anger in America might just calm down a bit if we all had a game to watch."

One person who took exception to Cataldi's tweet was Eagles' wide receiver DeSean Jackson, who called the radio host out of touch with the reality of the social and political climate that has driven athletes to use their platform over the last month.

Disclaimer: The author was at one time an employee with Spiranac at GOLF Magazine.